Who? You must be new around here. 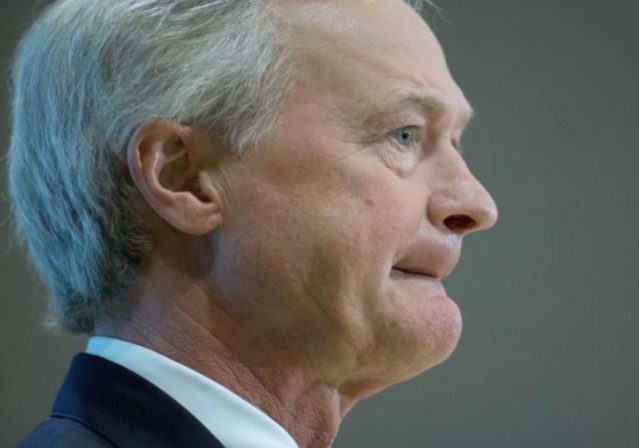 Readers of Legal Insurrection know who Linc Chafee is.

For several years we covered the once-upon-a-time Republican Senator (in a seat he inherited from his father), and Independent former Governor of Rhode Island, is quirky, to put it mildly.

As I noted in 2012, Linc Chafee, Rhode Island’s Independent In Name Only Man:

The long suffering people of Rhode Island and Providence Plantations elected Linc Chafee Governor in 2010, on the Independent line.

When Chafee was a Republican Senator, he was ranked as the No. 1 RINO by Human Events.  Chafee lost his reelection bid in 2006 to Sheldon Whitehouse.

In 2010, Chafee ran for Governor and eked out a win in a three way race beating the Republican candidate 36.1% to 33.6%, with the Democrat who famously told Obama to shove his endorsement of Chafee, coming in at 23%.

Since winning, Chafee has governed as expected, out liberaling Democrats on issues like illegal immigration, where he has sought to turn Rhode Island into a sanctuary state.

In 2015, when he announced he was running for president as a Democrat, I asked, Wut? Former RI Senator and Governor Linc Chafee for President?

Chafee’s 2015 run for president was amusing, particularly when he said her Iraq War Vote Disqualifies Hillary.

But Linc didn’t make it very far, in fact, he dropped out before 2015 was over, Don Quijote de la Chafee drops presidential bid:

Lincoln Davenport Chafee, former U.S. Senator and Governor of the State of Rhode Island and Providence Plantations, Mayor of Cranston, son of the late U.S. Senator John Chafee, and most importantly, farrier extraordinaire, announced this morning that he is abandoning his quest for the Democratic nomination to be President of the United States of America.

His campaign never got off the ground. He did little fundraising, and appeared catatonic during the first Democratic debate.

In hindsight, Chafee assessed what doomed his campaign: He endorsed conversion to the metric system:

Looking back on the primary, are there things you wish you did better?

I guess the big mistake—I went back and forth on including the metric system angle. I was just crossing my fingers there would be some intellectual approach to the various proposals I put out in my announcement speech, which kind of covered the gamut, from ending capital punishment, to bringing Edward Snowden home. Also, I was for TPP. Unfortunately, my crossed fingers didn’t work, and it just turned into more of a joke about metric, not “let’s look at the bigger picture.” I think, and it’s a trend, there’s just less of a Walter Cronkite, I call it, approach to the news. It’s entertainment. Donald Trump, early on, said: I’m just going to push every possible emotional button I can. I don’t care! And he crushed the nomination.

The metric system seems like it works everywhere else.

Canada had it. And I was there when they were doing the transition to it. It’s no big deal!

It could be our undercurrent of anti-European sentiment.

Yup. I was saying, should I put it in or not? My wife said, no, it will be misunderstood. And she was right.

Linc no longer lives in Rhode Island, one of the benefits of our out-migration, but he’s back running for president. Providence station WPRI reports:

Former Gov. Lincoln Chafee is taking steps to make a second run for president, this time under a different party banner.

Chafee filed paperwork with the Federal Elections Commission on Sunday creating a Lincoln Chafee for President campaign committee based in Teton Village, Wyoming, where he and his wife now make their home. A related website indicates he plans to run for the Libertarian Party nomination, as he has previously suggested he might do.

The news may spur concern among Democrats about the possibility Chafee could siphon votes away from their party’s eventual nominee in what is expected to be a tough race against President Trump. The 2016 Libertarian ticket of Gary Johnson and Bill Weld received about 4.5 million votes nationwide. (Weld is now challenging Trump for the GOP nomination.)

Wow, what a compelling candidate he will be. Just take any contributions that come in, set them on fire and flush ’em down the toilet. The end result will be the same.

We already have the metric system – a blended system.

I think I’ll vote for him just so I can have a “Don’t blame me, I voted for Lincoln” bumper sticker on my car

Long ago, in fifth grade, each child had to a report on a state. My son was unlucky enough to draw Rhode Island. Nothing has happened there since the early 1700. There wasn’t even a Revolutionary War battle fought there.

At least the report was easy to write.

He must be smoking crack. Only one in a thousand voters can even remember who he is, and most of those don’t like him. Soleimani would probably get more votes if he wasn’t already dead.