Chancellor Merkel in a her New Year’s message: “Global warming is real. It is threatening.” 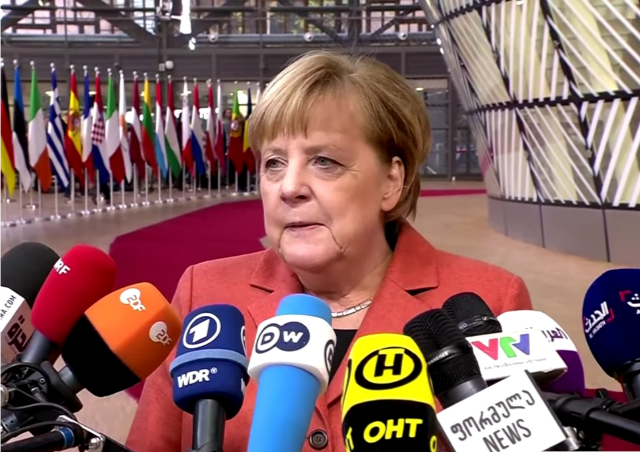 German Chancellor Angela Merkel declared jihad on climate change, vowing to do “everything humanly possible” in her New Year’s message to the nation. “Global warming is real. It is threatening,” she told Germans in a televised address. Merkel, who has been at the helm for more than 14 years, wants to remain Germany’s chancellor until 2021.

As the German chancellor diverts “all her strength” towards her ‘Kampf’ on climate change, the country faces rising Islamism and migrant crime of record proportions. While the German government has been raising alarm over the threat of climate change, it has been telling ordinary Germans ‘not to panic’ over the returning Islamic State terrorists.

Merkel’s New Year’s remarks come when she faces rebellion within her Christian Democratic party (CDU) over her extreme climate change policies. The conservative faction of the CDU, the WerteUnion, blasted Merkel and her cabinet ministers on Monday for contributing to the nationwide ‘climate hysteria.’ “The Sun drives the climate and not CO2,” declared the Bavarian chapter of the WerteUnion ahead of Merkel’s televised message.

German Chancellor Angela Merkel said in a her New Year’s message she is fighting climate change with all her strength to enable future generations to live in peace and prosperity.

“Global warming is real. It is threatening,” Merkel said in the recorded speech which will be broadcasted on Tuesday evening. Rising world temperatures and the problems created by global warming are all man-made, Merkel added.

“So we have to do everything humanly possible to overcome this human challenge. It is still possible,” Merkel said.

“At 65, I am at an age at which I personally will no longer experience all the consequences of climate change that will occur if politicians do not act,” the chancellor said.

“It will be our children and grandchildren who have to live with the consequences of what we do or refrain from doing today. That is why I use all my strength to ensure that Germany makes its contribution – ecologically, economically, socially – to getting climate change under control.”

The climate agenda is not driven by the need for a cleaner environment or protecting nature, but by the left-wing extremist pressure groups like the Extinction Rebellion and Swedish activist Greta Thunberg’s Fridays for Future. Merkel admitted that activists like Thunberg “drove” her and other European leaders into making these sweeping policy changes. “The seriousness with which Greta, but also many, many other young people, are telling us that this is about their lives, and that their life spans extend further, has led us to approach the matter more resolutely,” she said in July.

While Merkel is doing “everything humanly possible” in her fight against climate change, the country is in the grip of surging migrant crime. Germany witnessed 40 knife attacks in a span of just a few day of in early December, German media reported.

The antisemitic violence, too, is at a high since the collapse of the Nazi Germany. In the German capital Berlin, violent attacks against Jews rose by 155 percent in 2018 as compared to the previous years figures. According to German police, antisemitic attacks have risen by 20 percent nationwide compared to two years ago.

During this month’s Hannukah celebrations, a Jewish cemetery in the German town of Geilenkirchen was vandalized. Two unnamed suspects overturned more than 40 gravestones and sprayed others with paint. Police release the duo after questioning on Monday.

The war on climate change waged by the German government is in contrast to the stance taken by U.S. President Donald Trump. Since taking office, the U.S. president has reversed the climate policies put in place by the Obama administration. In June 2017, President Trump pulled the U.S. out of the Paris Climate Accord. A month later, he disbanded the federal advisory panel on climate change, a policy-making body. President Trump refused to hand out billions of dollar under the Paris pact while counties like China and India, two of the biggest global polluters, were financially benefiting from the framework.

For many activists and pressure group crusading under the banner of climate change, it is just another means of fulfilling their Marxist dogma of taking wealth away from the West and handing it out to Third World failed states and socialist basket cases in Asia, Africa, and Latin America.

The demand for ‘decarbonization’ of the Western economies is also a call to de-industrialize them. It is very telling that climate activists calling on Germany to dismantle its car industry, and U.S. to stop offshore drilling, won’t tell China to stop ramping up its coal or nuclear power plants.

Berlin is spending billions on ‘climate’ programs at a time when poverty is at its highest since the German unification nearly three decades ago. More than 15 million Germans, roughly 20 percent of the population, “aren’t earning enough to pay their bills or adequately heat their homes,” a 2018 official study showed.

In addition to that, Merkel’s much-feted Energiewende, or energy transition, is expected to cost €520 billion by 2025. This transition from conventional to renewable energy has already resulted in spiraling costs of electricity and heating for households, hitting the poor and working class Germans the most.

If anyone can come up with a “Final Solution” to the climate change question, it’s Mutti Merkel.

Shouldn’t she then send the African/ME invaders back to their homelands where their carbon footprints will be substantially smaller?

May I suggest she reduce her total carbon footprint to zero?

Angela Merkel is lying when she says Germany is doing everything humanly possible to fight climate change. The truth is that such a claim is self-contradictory.

What can she do to stop solar flares, volcanic eruptions, and the other real causes of climate change?

The one thing she could do immediately to drop emissions like a rock is deport the third world from Germany. Each Syrian, Moroccan, Afghani that is in Europe uses 30 times the resources as they would in their goat huts in dirtistan.