Someone should alert New York’s senior senator to make him aware that when he’s lost Democrat-friendly news outlets like CNN he’s, ya know, lost. 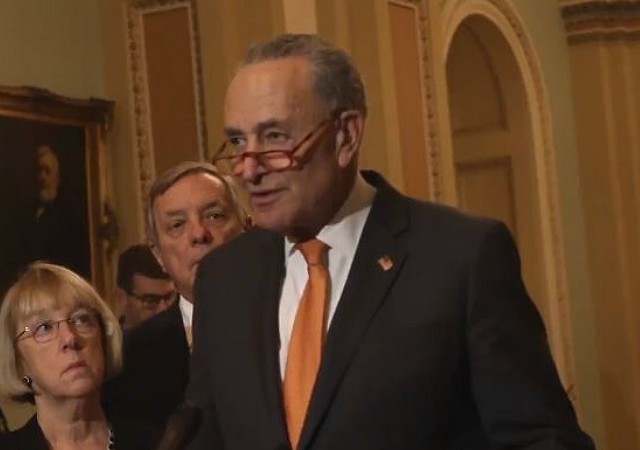 Two weeks ago, Sen. Majority Leader Mitch McConnell (R-KY) made it very clear to Democrats that he had no intention of playing by the left’s rules when it came time for the Senate to conduct the impeachment trial.

Predictably, Democrats erupted, with some calling for McConnell to recuse himself from the trial.

In a follow-up interview a few days later in front of a gaggle of reporters, McConnell iterated his position, stating “I’m not and impartial juror. This is a political process, there’s not anything judicial about it.”

Sen. Minority Leader Chuck Schumer (D-NY) spoke just a short time after McConnell’s remarks, noting he was “utterly amazed” that his Republican Senate colleague would make such an admission.

Watch both McConnell and Schumer speak in separate interviews on this issue:

Schumer responds, "I'm utterly amazed… Do the American people want Mitch McConnell not to be an impartial juror in this situation?" pic.twitter.com/9dkD4BjLvi

Schumer’s line of attack is a drum that he and other Democrats have continued to bang since McConnell told Hannity and the reporters earlier this month, in so many words, that he was not going to let Democrats dictate how the Senate’s impeachment trial would be run.

Unfortunately for New York’s senior senator, his own words from 1998 and 1999 on President Bill Clinton’s impeachment have come back to haunt him.

Surprisingly enough, it was CNN that did the digging and found comments Schumer made both when he ran for Senate in 1998 and after he was elected in which he let people know he had already made up his mind before the Senate trial started:

But in several appearances on television in 1998 and 1999 reviewed by CNN’s KFile, Schumer noted that senators had previously formed opinions heading into the trial and that the Senate was “not like a jury box.” Schumer was elected to the Senate in 1998 after saying during his campaign that a vote for him would be a vote to not impeach Clinton.

Speaking on CNN’s “Larry King Live” in January 1999, Schumer said the trial in the Senate was not like a jury box.

“We have a pre-opinion,” Schumer said, citing himself and two newly-elected Republican senators who had voted on impeachment in 1998 as members of the House of Representatives who said they would vote in the Senate. “This is not a criminal trial, but this is something that the Founding Fathers decided to put in a body that was susceptible to the whims of politics.”

“So therefore, anybody taking an oath tomorrow can have a pre-opinion; it’s not a jury box,” King asked Schumer.

“Many do,” Schumer responded. “And then they change. In fact, it’s also not like a jury box in the sense that people will call us and lobby us. You don’t have jurors called and lobbied and things like that. I mean, it’s quite different than a jury. And we’re also the judge.”

At the time of the vote to remove Clinton, Schumer announced in a Newsday op-ed that he would be voting to acquit.

Schumer said he made up his mind in September 1998, when in the midst of his campaign for Senate, he voted against proceeding with impeachment as a member of the House Judiciary Committee.

Watch two different highlight reels of Schumer speaking on “pre-opinions” in the late 1990s below:

Schumer had attacked his Senate opponent Al D’Mato for not taking a position on impeachment during their 1998 debate. D’Mato said he would not take a position until “the proof is presented” at the Senate trial –  calling it “inappropriate.” https://t.co/nPMyvjZE6V pic.twitter.com/tYAc6hkwzd

To top it off, Fox News reported last week that Senate Democrats did indeed coordinate with the Clinton White House during impeachment proceedings:

According to then-Washington Post reporter Peter Baker’s book, “The Breach: Inside the Impeachment and Trial of William Jefferson Clinton,” Senate Democrats coordinated with the White House on a number of impeachment-related issues behind the scenes.

According to Baker, one of those arrangements involved White House Counsel Charles Ruff arranging a “secret signal” with Democratic leadership. If Ruff wanted to rebut anything from the Republican House managers, something rules didn’t allow for, he pre-arranged with then-Senate Democratic Leader Tom Daschle’s aides for a senator to submit a question to then-Chief Justice William Rehnquist asking the White House to respond.

Aides reportedly would “fill in the name” of one of several “default senators” — such as Sen. Patrick Leahy, D-Vt., and then-Sen. Chris Dodd, D-Conn. — who had agreed to allow themselves to “be used in this way.”

It’s almost as if Senate Democrats have two sets of standards when it comes to impeachment trial impartiality. None for them, but strict standards for Republicans. Imagine that.

Like all Leftists through history, Chuckie does nothing but lie. The entire Leftist agenda is, and has always been, based on lies, misinformation, and deception. And everywhere that Leftists have been allowed to lie, cheat, and steal their way into power and control, unmitigated disaster has always been the result. And that is what the Communists – er, I mean the Democrats – have planned for this nation should we ever be foolish enough to allow them to gain complete control of our government.

Maybe one of these days the dim/lib will figure out that the camera that they sooooooo love to schmooze up to also records ……but then again we do call them Dims.

The Senate should schedule the trial and acquit if the articles of impeachment aren’t delivered. Otherwise, go thru the evidence and throwout anything that violated normal jurisprudence which will leave no evidence so they should acquit.

Dems have two sets of standards? One for thee and one for me? Uhhhh…..yeah. That’s like re-stating that the sun rises in the East and sets in the west.