European move could pave the way for global sanctions against Iran. 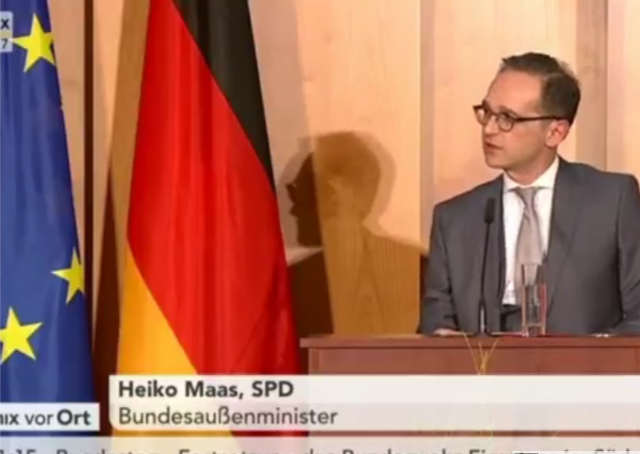 Germany, France and the United Kingdom have launched a formal dispute mechanism against Iran which could end up putting international sanctions on the regime. The measure was announced on Tuesday following recent Iranian violations of the 2015 nuclear deal. The dispute will now be brought before a Joint Commission made up of Iran, Russia, China, the three European signatories, and the European Union. If the panel fails to resolve the dispute, the matter will then come before the United Nations Security Council.

Even if the process gets stalled at the UN, Iran could end up facing comprehensive international sanctions — in addition to the current U.S. sanctions, media reports suggest. “If the Security Council does not vote within 30 days to continue sanctions relief, sanctions in place under previous UN resolutions would be reimposed – known as a “snapback”,” British newspaper The Telegraph reported.

Tehran dismissed the European decision to take it before an international panel as a “passive” move. “The Islamic Republic of Iran, as in the past, has complete readiness to support any (act of) goodwill and constructive effort to save this important international agreement,” an Iranian foreign ministry spokesman said in a statement.

Reuters reported the measure taken by the UK, France and Germany, also collectively known as the E3 signatories of the 2015 nuclear deal:

France, Britain and Germany confirmed on Tuesday that they had triggered the dispute mechanism in the Iran nuclear deal given Tehran’s ongoing violations, but said they were not joining the United States campaign to exert maximum pressure on Tehran.

“We do not accept the argument that Iran is entitled to reduce compliance with the JCPoA [Iran Nuclear Deal],” the three countries said in a joint statement, saying they had no choice but to trigger the process that could eventually lead to U.N. sanctions.

“Instead of reversing course, Iran has chosen to further reduce compliance.”

Iran took a further step back from its commitments to the 2015 pact, with six world powers, by announcing on Jan. 6 that it would scrap limits on enriching uranium, though it said it would continue cooperating with the U.N. nuclear watchdog.

“We do this in good faith with the overarching objective of preserving the JCPoA and in the sincere hope of finding a way forward to resolve the impasse through constructive diplomatic dialogue, while preserving the agreement and remaining within its framework,” they said.

The announcement comes days after the three European powers expressed their support for the nuclear deal. “[W]e remain committed to the JCPoA and to preserving it,” the leaders of Germany, France, and the United Kingdom said in a joint statement on January 12.

The announcement comes almost a week after U.S. President Donald Trump urged the European allies to “break away from the remnants” of the agreement. “The very defective JCPOA  [Iran nuclear deal] expires shortly anyway, and gives Iran a clear and quick path to nuclear [weapon] breakout. The time has come for the United Kingdom, Germany, France, Russia and China to recognize this reality,” the U.S. President said last Wednesday in his speech in response to the Iranian missile attacks on U.S. forces in Iraq.

[Author’s note: Portions of this post, including the title, were reworked in light of new development of European governemnts triggering the dispute mechanism]

“Despite increasingly difficult circumstances, we have worked hard to preserve the agreement.”

The Correct Process must be followed, even if the result is genocide. The EU – and, I am sorry to say, many in the UK – would like nothing better than for Iran to turn Israeli Jews into radioactive dust.

This is such Kabuki theater. Iran’s corrupt leadership has been circumventing the deal since day 1, so deal or no deal, nothing changes. It’s fun to watch the EU squirm, though.

I also laughed when I heard about all of the potential cyber threats from Iran reported by the msm. Really? with what tech?

Just to play safe, how about destroying all their Internet links to the rest of the world?

Finally, some positive progress. People are skeptical of the quid pro Bo. It was a great deal for the Iranian regime, not limited to ignoring counter claims, and palettes full of cash. Probably many quid pro Joes, from DC to Tehran, too.

I think we should offer Iran a nuclear deal, they stop all their nefarious activity, or we let them study a few nukes as they reach critical reaction.

“If the Security Council does not vote within 30 days to continue sanctions relief, sanctions in place under previous UN resolutions would be reimposed – known as a “snapback”,” British newspaper The Telegraph reported.

This doesn’t depend on the Europeans. Trump could have invoked the snapback clause on Jan 20, 2017, and on Feb 19 all the mandatory UN sanctions would have automatically come back, and there would have been nothing the EU could have done to stop it. Trump fans should at least try to answer why he didn’t do this.

Maybe because the fucking Europeans should be getting off their fat fucking arses and introduce themselves to reality and do something instead of leaving everything to Trump to do.

That doesn’t answer the question. All the mandatory sanctions from before JCPOA could have been back in place by Feb 20, 2017. They weren’t for one reason only: Trump chose not to invoke the snapback clause.