Pelosi Gives Blessing to Proceed With Impeachment: ‘The President Leaves Us With No Choice’

Pelosi Gives Blessing to Proceed With Impeachment: ‘The President Leaves Us With No Choice’ 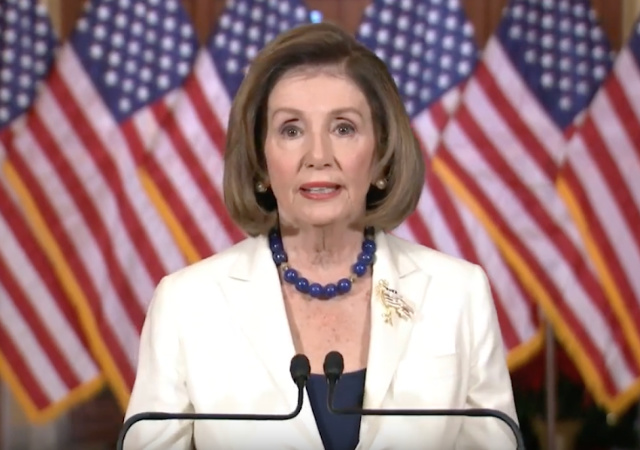 Speaker of the House Nancy Pelosi announced this morning that she has asked “our chairman to proceed with articles of impeachment” against President Donald Trump.

Pelosi claimed Trump “abused his power for his own personal political benefit at the expense of our national security.”

She also claimed that America’s “democracy is at stake.” Well, it’s a good thing we’re a republic!

For some reason, she believes Trump’s “actions have seriously violated the Constitution.” Didn’t the House and Senate renew the Patriot Act?

Pelosi did not provide a timeline or details. The articles of impeachment include abuse of power and bribery, obstruction of Congress, and obstruction of justice.

.@SpeakerPelosi & the Democrats should be ashamed. @realDonaldTrump has done nothing but lead our country – resulting in a booming economy, more jobs & a stronger military, to name just a few of his major accomplishments. ?? We look forward to a fair trial in the Senate.

Trump dared the Democrats to impeach him:

The Do Nothing Democrats had a historically bad day yesterday in the House. They have no Impeachment case and are demeaning our Country. But nothing matters to them, they have gone crazy. Therefore I say, if you are going to impeach me, do it now, fast, so we can have a fair….

…..trial in the Senate, and so that our Country can get back to business. We will have Schiff, the Bidens, Pelosi and many more testify, and will reveal, for the first time, how corrupt our system really is. I was elected to “Clean the Swamp,” and that’s what I am doing!

Said the Bitch that has gotten rich in office and her husband richer. All this while the President has made America great again which has cost him about 1 billion in personal wealth.

Somebody needs to be bitch slapped.

It’s certainly proof that the flag has nothing to do with patriotism.

She crows about patriotism the Constitution and the founders, when she and her merry band of totalitarian tyrants are antithetical to all that she crowed of,disgraceful.

Oh, come on. Congress has unlimited choices and free will to choose wisely. BTW, that white suit looks very cultish.