The rogue nation is even threatening to call Trump a “dotard” again as it reconstitutes its satellite launch facility. 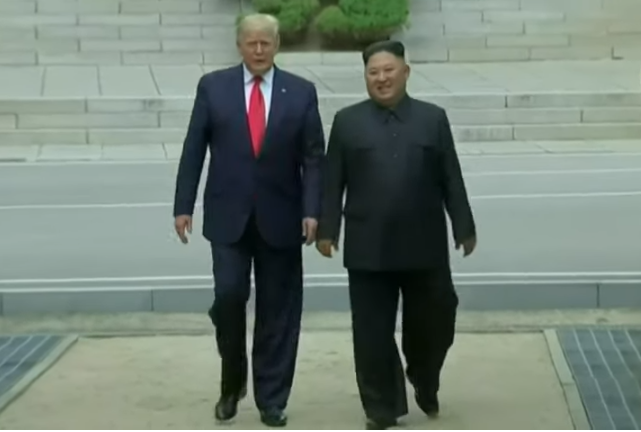 Amid the drama of the NATO summit and the impeachment hearing, there have been some disturbing developments related to North Korea.

For example, North Korea warned that if nuclear arms talks are not resumed before the end of the year, the nation may receive a nasty “Christmas gift” delivered by leader Kim Jong Un.

In a statement attributed to Ri Thae Song, a vice foreign minister in charge of U.S. affairs, the regime expressed frustration at the lack of progress in the talks with the U.S., saying the negotiations appeared to be a “foolish trick” aimed at stalling North Korean progress and scoring domestic political points.

Ri said North Korea has “heard more than enough” of U.S. rhetoric and “no one will lend an ear to the U.S. any longer.”

North Korea has been calling for the U.S. to offer new terms for a deal since the February summit in Hanoi between Kim and President Donald Trump broke down. Since the end of that meeting between the two leaders, North Korea has resumed missile tests and has threatened to start launching long-range missiles again as well.

What may have triggered Kim is some remarks President Donald Trump made during the NATO summit.

North Korean leader Kim Jong Un was not happy with President Donald Trump’s remark at the NATO meeting in London that the U.S. would use force against his regime if necessary.

In a statement published by the state-run North Korean Central News Agency, army chief of staff Pak Jong Chon said Kim was “displeased” with the “undesirable remarks” and warned that North Korea and the U.S. “are still technically at war and the state of truce can turn into an all-out armed conflict any moment.”

“One thing I would like to make clear is that the use of armed forces is not the privilege of the U.S. only,” Pak said.

When asked by reporters about North Korea’s continued missile tests on Tuesday, Trump said the U.S. has the most powerful military in the world and that he would use it against Kim’s regime “if we have to.”

He added that Kim “likes sending rockets up, doesn’t he?”

“That’s why I call him Rocket Man,” Trump said, referring to a nickname he had given Kim amid their belligerent exchanges in 2017.

In response, the rogue nation is now threatening to call Trump a “dotard” again!

North Korea threatened Thursday to resume insults of U.S. President Donald Trump and consider him a ”dotard” if he keeps using provocative language, such as referring to its leader as ”rocket man.”

The comments came as prospects dim for a resumption of nuclear diplomacy between the two countries. In recent months, North Korea has hinted at lifting its moratorium on nuclear and long-range missile tests if the Trump administration fails to make substantial concessions in nuclear diplomacy before the end of the year.

Finally, Legal Insurrection readers may recall that in the summer of 2018, North Korea was reported to be dismantling its Sohae Satellite Launching Station.

It seems they are now reconstructing the facility.

A new satellite image obtained by CNN indicates North Korea may be preparing to resume testing engines used to power satellite launchers and intercontinental ballistic missiles at a site President Donald Trump previously claimed was dismantled after his Singapore summit with dictator Kim Jong Un this summer, according to experts who analyzed the photo.

The commercial satellite imagery, which was captured on Thursday by Planet Labs, shows new activity at Sohae Satellite Launching Station and the presence of a large shipping container at the facility’s engine test stand, according Jeffrey Lewis, director of the East Asia Nonproliferation Program at the Middlebury Institute, which works in partnership with the imaging company.

The shipping container was not seen at the site before Thursday and its presence suggests the North Koreans are moving to resume tests engine tests at Sohae, Lewis told CNN.

Such an insult, no less from a sputtering rocket man.

If you find “Dotard” in the dictionary, there is a picture of Joe Biden next to it.

Nice little launch facility you got there, Kim. Be a shame if sometin’ happened to it.

South Korea could use the space for a parking lot. Might need a lead suit for a few years.

Hopefully he’ll nuke DC when Trump is out of town. Maybe he’ll hit Martha’s vineyard too.

We’ll be in his debt.

A lump of coal is a good thing…