Lindsey Graham on Impeachment: “I am going to end this as quickly as I can”

Lindsey Graham on Impeachment: “I am going to end this as quickly as I can”

“This is a joke of a process. It’s dangerous for the country.” 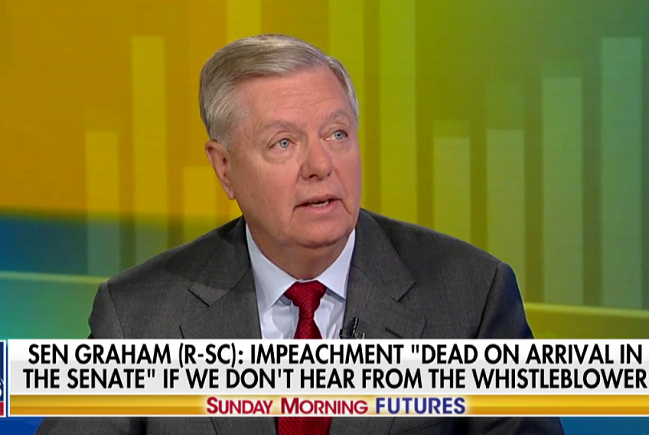 Senator Lindsey Graham (R-SC) appeared on Fox News Sunday morning and blasted House Democrats in general and Rep. Adam Schiff (D-NY) in particular.  Graham, who serves as Chair of the Senate Judiciary Committee, also shared his intention to end the impeachment trial “as quickly as I can for the good of the country.”

To that end, Graham states that he has no intention of calling as a witness either the “whistleblower” or Schiff (or the Bidens).  He says that he doesn’t want to give the “joke of a process” House impeachment “any more credibility than it deserves.”

Rep. Adam Schiff, D-Calif., “is doing a lot of damage to the country, and he needs to stop,” according to Sen. Lindsey Graham, R-S.C.

“The whole process is illegitimate in the House,” Graham told Fox News’ “Sunday Morning Futures.” “It’s not just the whistleblower. You don’t want to create a situation where an anonymous person can start impeachment proceedings against the president of the United States.

“This is a joke of a process. It’s dangerous for the country.”

Graham told host Maria Bartiromo he would stop short of calling Schiff to testify before the Senate Judiciary Committee in an impeachment trial against President Donald Trump, however.

“I’m not going to participate in things I think are going to destroy the country – I am not going to call a bunch of House Members as a part of oversight,” Graham, the Senate Judiciary chairman, said.

“We’re not going to turn the Senate into a circus. And I would tell Schiff, ‘what you’re doing is very dangerous for separation of powers here.'”

Graham said that instead of turning the Senate into a circus, he will refer House Democrats’ abuse of power to congressional oversight.

Instead of calling House Members, Graham said he will end the impeachment trial quickly in the Senate and refer House Democrats’ abuse of power and Ukraine corruption investigations to congressional oversight.

“I’m going to end this as quickly as I can for the good of the country,” Graham said. “When 51 of us say, ‘we’ve heard enough,’ the trial is going to end. The president’s going to be acquitted.

“Impeachment is tearing the country apart. I don’t want to give it any more credibility than it deserves,” he added.

Perhaps anticipating pushback from Republican voters and/or the White House, Graham also said that the president should be happy he’s going to be acquitted and should “celebrate that.”

Schiff is one of several key figures President Trump has fiercely criticized throughout this process, but Graham said he would not recommend calling him or anyone else to testify at an impeachment trial. The senator claimed there would be no need to do so, barring a bombshell revelation between now and the beginning of a trial.

Graham might be right. The most important thing is a unanimous vote among Republicans to dismiss. If Collins, Murkowski, and Delecto don’t want to embarrass Biden, but will acquit in return for this, you have to take it.

POTUS, accompanied by an army of angry Judge Advocate Generals and several Ukrainian officials (plus translators) strides to the front of the room.

Joe Biden, watching from the campaign trail, fills his Depends.

That wasn’t the question, but whether the Supreme Court could intervene. It cannot.

Paul in Sweden: the partisan impeachment hearings have not met a single criteria required for impeachment

There’s no way for the Supreme Court to void an impeachment because the power belongs solely to the House of Representatives. They have no say in the matter.

It’s going to get worse.

I do not know what Gramnesty’s goals re this impeachment circus nor his plans to reach them are. I am fairly certain he is acting to uphold the USA occasionally, by chance and to uplift himself and his donors always and by intent.