In what reality does refusing to transmit the Articles of Impeachment to the Senate as a pressure tactic make any sense? 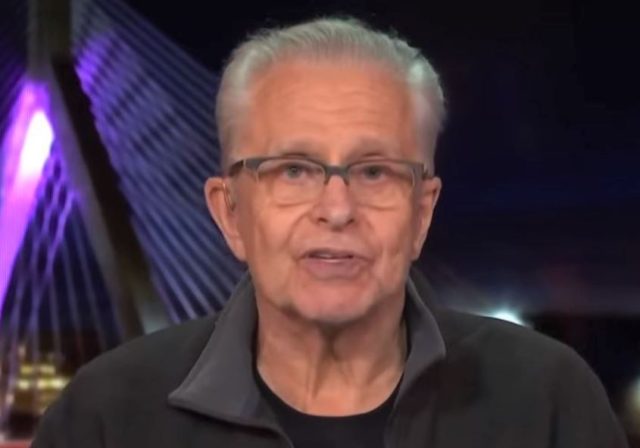 Harvard Law School Professor Laurence Tribe has a somewhat storied history, long considered a leading liberal legal light, someone who was talked about in the past as a possible Supreme Court nominee.

Tribe’s scholarly accomplishments always mixed with pugilistic politics. He was involved in developing what now is known as “Borking”:

What is clear, though, is that more than anyone else, he is the intellectual architect of the more expansive and aggressive role the Senate is now taking in reviewing President Reagan’s Supreme Court nominations, a role that culminated last month in the rejection of Judge Robert H. Bork of the United States Court of Appeals for the District of Columbia.

It was, moreover, Mr. Tribe who helped prepare the Democratic members of the Senate Judiciary Committee for Judge Bork’s confirmation hearings and who, in the carefully choreographed parade of witnesses, served as the keynote speaker for the opposition.

Tribe has fallen off a cliff in the age of Donald Trump.

Tribe frequently provides the legal cover for the Resistance. Soon after Trump’s election win, Tribe volunteered to represent so-called Unfaithful Electors as part of a Resistance effort to get Electoral College Electors not to follow their respective state votes: 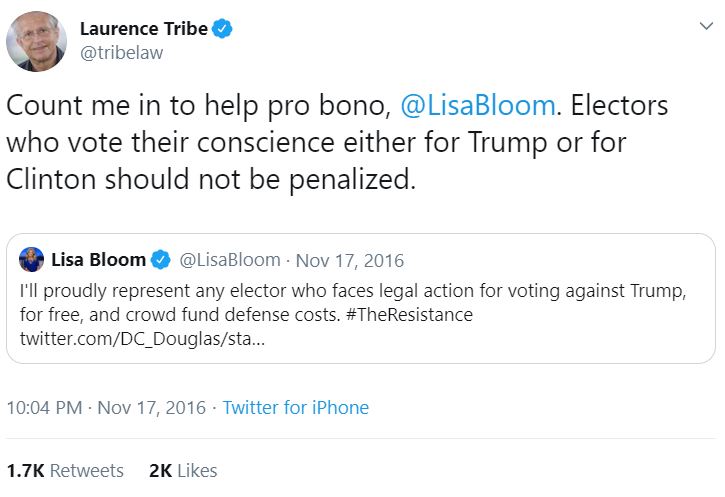 As has happened with many prominent people who just couldn’t handle Trump’s win, Tribe chose Twitter followers and retweets for his reputation.

Tribe was an early adopter of impeaching Trump, even before Trump took office, and his Twitter feed went off the sanity rails, as this June 2017 article by Gene Healy summarized, Laurence Tribe’s Impeachment Hysteria:

Impeachment “Should Begin On Inauguration Day,” Tribe declared in December; by January 28, he had concluded that Trump “must be impeached for abusing his power and shredding the Constitution more monstrously than any other president in American history” — pretty impressive for a man entering the second week of his presidency.

In the first months of Trump’s tenure, Tribe floated everything from violations of the Emoluments Clause to the “cruel brand of bigotry” that supposedly motivates the travel ban to a State Department blogpost touting the “winter White House” at Mar-a-Lago, even suggesting that the president could be defenestrated on the basis of a single tweet: his March 4 claim that Obama had his “wires tapped” in Trump Tower. When law professor Johnathan Turley laughed off the idea on Morning Joe, back in March, Tribe had a mini-conniption on Twitter: “Using power of WH to falsely accuse [Obama of an] impeachable felony does qualify as an impeachable offense whether via tweet or not,” he huffed….

Tribe’s feed has become a “vector of misinformation and conspiracy theories on Twitter,” as Dartmouth political scientist Brendan Nyhan puts it. The distinguished professor of constitutional law has become a sucker for crackpot theories about the Trump-Russia connection, and a fan of those who spread them, such as “the incomparable Louise Mensch.” “Incomparable” is right. Mensch, the “paranoid bard of the age of Trump,” claims, among other things, that Vladimir Putin had Andrew Breitbart assassinated, and that “the Marshal of the Supreme Court” has notified President Trump of secret impeachment proceedings that are already underway. 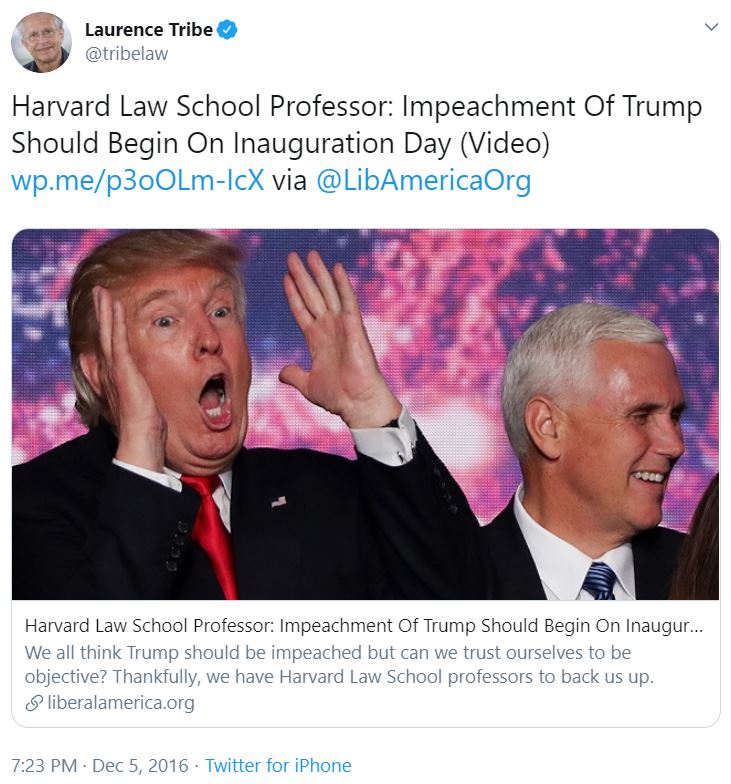 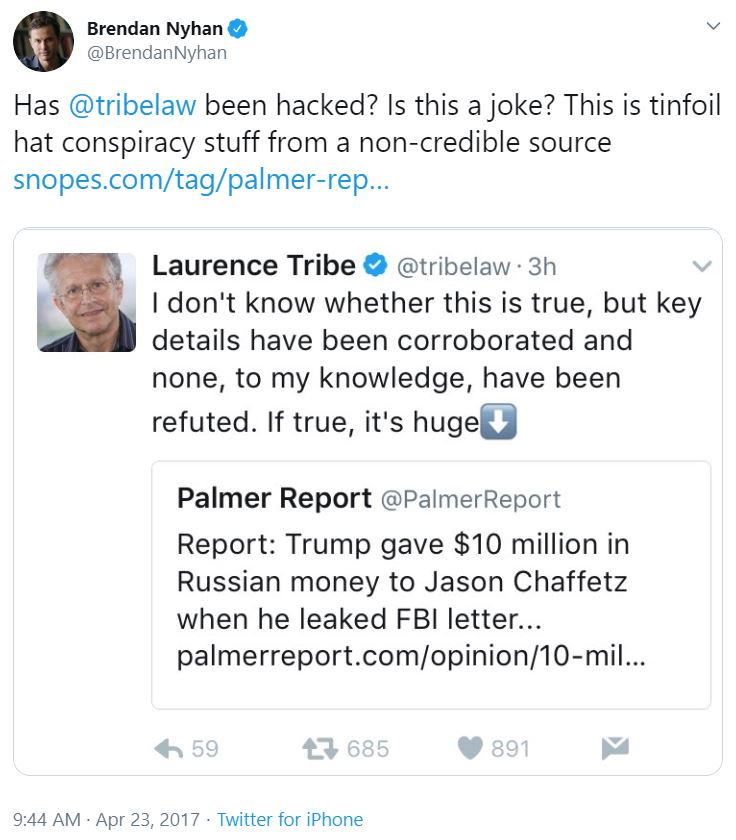 Knowing what Tribe’s Twitter feeds embodies, I laughed when I saw him proposing that Nancy Pelosi hold the Articles of Impeachment hostage to exert pressure on Republicans in the Senate. It was delusional:

Vote for the Articles of Impeachment in the House, then hold them like a Sword of Damocles over Trump and McConnell until he agrees to abide by his oath and hold a fair trial in the Senate, not a Trumpian whitewash. 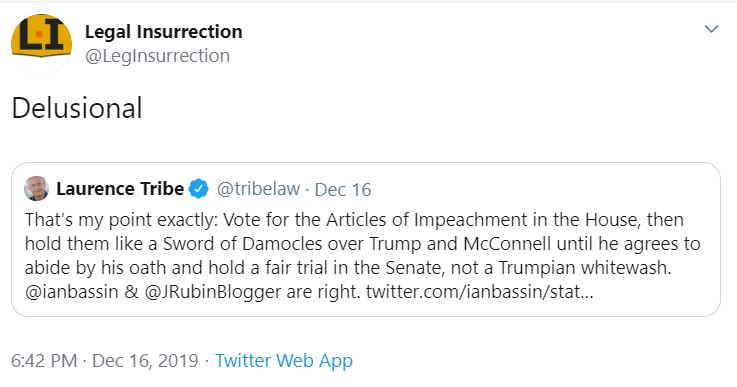 Why would it be the Sword of Damocles over the heads of Republican Senators? If anything, it would reveal Democrats, who insisted that we had such a national emergency that they couldn’t wait to gather all the evidence, to be just playing games. It was wishful thinking at best, a hoped-for outcome divorced from the reality that Republican Senators couldn’t care less if the Articles of Impeachment never were sent over for trial.

Surely Democrat leadership would not follow such delusional analysis. Surely?

Speaker Nancy Pelosi refused to commit Wednesday to delivering articles of impeachment to the Senate, citing concerns about an unfair trial on removing President Donald Trump from office….

[Steny] Hoyer said Democratic colleagues have approached him in recent days, citing an op-ed by constitutional lawyer Laurence Tribe in which he calls on Democrats to delay sending impeachment articles to the Senate until McConnell agrees to run a fairer process.

“Under the current circumstances, such a proceeding would fail to render a meaningful verdict of acquittal,” Tribe wrote. Notably, House Judiciary Committee Democrats huddled with Tribe earlier this month as they practiced behind closed doors for their series of impeachment hearings.

Okay, Democrats were considering it, but they wouldn’t really do it, right?

House Speaker Nancy Pelosi indicated Thursday that she would delay sending the articles of impeachment to the Senate, seeking more clarity on the rules for President Trump’s trial and potentially pushing the proceedings well into the new year.

Mrs. Pelosi’s comments drew condemnation from Republican lawmakers and President Trump, but the California Democrat said that she couldn’t select impeachment managers and advance the matter without more details about the Senate’s plans for a trial, which she has said should be conducted in a manner that she considers fair.

“When we see the process that is set forth in the Senate, then we’ll know the number of managers that we may have to go forward and who we will choose,” Mrs. Pelosi said shortly before the House adjourned for the rest of the year.

Pelosi appears to be losing it.

The delay has turned into a debacle, giving Trump and Mitch McConnell the opportunity to mock not just Pelosi, but the whole impeachment enterprise.

And Mitch McConnell is hardly intimidated:

“I’m not sure what leverage there is from refraining from sending us something we do not want.”

Trump supporters are energized. Democrats are wondering what they got themselves into.

If the polls are any indication, following Laurence Tribe’s advice is leading Democrats off a cliff in which they don’t get Trump removed, Trump gets reelected, and Democrats lose the House.

“When we see the process that is set forth in the Senate, then we’ll know the number of managers that we may have to go forward and who we will choose,” Mrs. Pelosi said shortly before the House adjourned for the rest of the year.

Nancy, you have to pass the AOI to the Senate to see what’s in the process.

Is it only me or does Tribe look like he’s got an old butch lesbian inside his face?

had this crazy thought, dems who are frustrated at Pelosi for not moving this forward align with republicans and get pelosi removed as Speaker. Dems would have to find another nominee and vote a new person as Speaker and move the process forward.
The impeachment hawks can’t be happy that this has stalled.

Now that the dust has settled a little bit, I will reiterate my point on this sham impeachment. The democrats came up with two non-articles that do not comply/comport with any aspect of Article 2 Section 4 of the Constitution. They voted on “abuse of power” and “obstruction of congress.” These are not in Article 2 Section 4. Furthermore, the democrats did not include/allege any Article 2 Section 4 violations within their fake articles either. The plain language of the Constitution states Articles based on Treason, Bribery or other High Crimes or Misdemeanors are to be voted on and sent to the Senate in cases of impeachment. Without those specific allegations, congress may as well have passed the articles “we hate Trump” and “she wasn’t supposed to lose.”

CKYoung: the democrats did not include/allege any Article 2 Section 4 violations within their fake articles either. The plain language of the Constitution states Articles based on Treason, Bribery or other High Crimes or Misdemeanors are to be voted on and sent to the Senate in cases of impeachment.

Resolved, That Donald J. Trump, President of the United States, is impeached for high crimes and misdemeanors … “

We can play word games all day long: “RESOLVED, that Zachriel, Commentor on LI, is Impeached for High Crimes and Misdemeanors…”

Confess your crimes Zachriel, or we will levy another charge of “Obstruction of LI” on you.

The definition of “high crimes and misdemeanors” is whatever the House says it is. In this case, winning the election.

Z: To set the timing, keeping the Republican Senate off balance.

Milhouse: As McConnell said, Pelosi is telling the senate “Do as we want, or we’ll refuse to do something you don’t want us to do”.

Pelosi is not refusing to do it. She’s delaying it to a time of her own choosing.

I see you got the same Talking Points as Sen. Whitehouse.

And you repeat them as if they actually mean something other than and meaningless act of desperation as a result of having lost the battle.

“Off balance”?! What does that even mean? It’s not as if the senate cares when the articles arrive. As far as it’s concerned never is just fine. The longer she takes the happier they are. In the meantime they’re just getting on with their business.