“You know what else is against the law? Hate speech.” 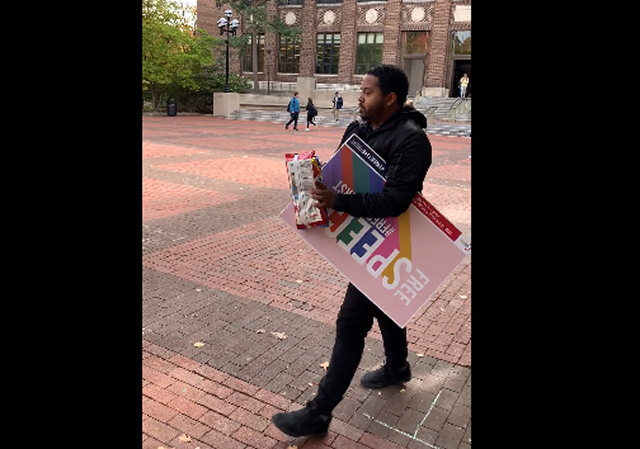 Turning Point USA was handing out materials at a table on campus when this student allegedly came along and started taking their stuff and destroying it.

A student at the University of Michigan is being investigated by campus police after he was recorded stealing and destroying recruitment materials from a conservative student group. The video shows the vandal dumping items onto the ground, tearing-up signs and throwing property in the trash.

The vandal continued his destruction by attempting to deflate the group’s free speech ball display. However, he discovered that the ball was “not deflating quick enough,” and moved on to tear up the chapter’s hand-drawn sign advertising “free hot cocoa and cookies” and crumple up the TPUSA signs that were saying things like “free speech,” and “I ❤America!”

aCampus police are investigating. Isn’t that shorthand for We know the administration won’t let anything happen to this student so we will “investigate” until he is no longer and student and then drop the case as “moot”.

Eliminate the initial “a” and change no longer and student to no longer a student.

He needs an ass kicking … he’ll learn more from that than from the legal system.

I was thinking the same thing. A HARD kicking. Some damage.

I can’t be the only one waiting for the video of someone getting the holy sh*t kicked out of them for pulling this crap.