Threw materials on the ground, demanded conservatives leave: “At various points, members of the mob start chanting: “F*** Trump,” and “No justice, no peace. No racist police.” 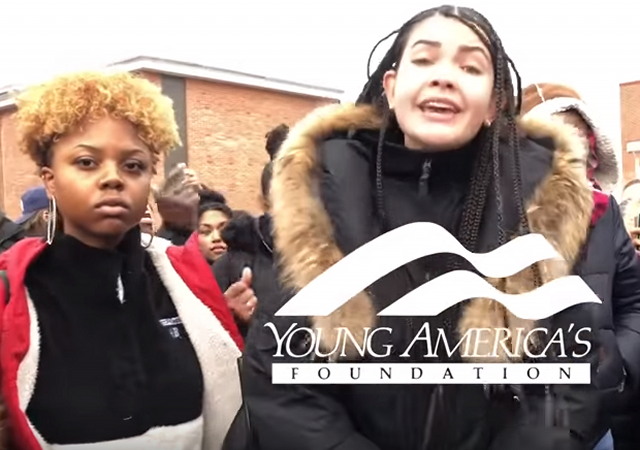 Students from the College Republicans and Turning Point USA were exhibiting on the campus of Binghamton University in New York, when they suddenly found themselves surrounded by an angry mob.

The video, which is posted below, shows students yelling obscenities at them and throwing their materials on the ground.

Frank Camp of the Daily Wire has details:

On Thursday, conservative students affiliated with the College Republicans and Turning Point USA (TPUSA) at Binghamton University in New York were harassed and intimidated by a massive mob of activists.

The groups were “tabling” side-by-side in a public space on campus, according to John Restuccia, president of the College Republicans.

While the College Republicans were handing out flyers for an upcoming speech by famed economist Dr. Arthur Laffer sponsored by the Young America’s Foundation (YAF), the individuals at the TPUSA table were handing out buttons and posters pertaining to conservative political ideology.

Restuccia left to attend a class, but was later called back to the site due to the burgeoning protest. He dialed the State University Police and headed over…

In the video, one activist attempts to dismantle the College Republicans/TPUSA set up, throwing buttons and posters to the ground, and flipping the table.

“Pack this s*** up. It’s time to go,” she says, grabbing and tossing property from the table…

At various points, members of the mob start chanting: “F*** Trump,” and “No justice, no peace. No racist police.”

Lacey Kestecher of Turning Point USA who was at the scene, told Campus Reform that this incident has changed the way she lives on campus and not in a good way:

“The police said to me yesterday when I was leaving, ‘if you’re going to walk around, don’t go through the middle of campus… [and] have somebody with you at all times,’” Kestecher told Campus Reform. She also reports that since Wednesday’s incident she “definitely [has] a new view on campus.”

“I thought I knew liberalism but then I came here,” she said.

“I don’t feel safe at all,” she said. “If I’m gonna walk, I have to have a guy with me… if I need to go out I need to text somebody to be with me at all times. Even walking certain floors on the building I’m being careful because some of the people who are just insane and unhinged live on the lower levels and I don’t know what to expect from them. I do not feel safe at all on this campus right now,” she continued, later adding that she’s “willing to press charges.”

Brian T. Rose, the Vice President for Student Affairs at Binghamton has released a statement. Here’s an excerpt, via WBNG News:

On Thursday, Nov. 14, two groups tabling outside of the Union attracted counter-protesters. The tension between the groups tabling and protesters became volatile and University Police intervened to remove the tabling groups in the interest of the safety of all involved.

The College Republicans, an organization chartered by the Student Association (SA), was joined by another group known as Turning Point that, by its own choice, is not chartered by the SA or otherwise recognized by the University. Representatives of the two groups set up tables outside the Union in a reservable space without having followed procedures to properly secure use of the space. Representatives of the Union professional staff and of the SA notified the tabling students that they were tabling without reservation in a space that had to be reserved in advance and asked them to relocate. The groups refused twice to move. The groups’ display included provocative posters with gun imagery, this being the same day as the Saugus High School shooting. Self-evidently from the nature of their display and their refusal to comply with procedures for reserving the space in question, the groups intended to be provocative. Social media activity suggesting they were handing out hot chocolate and promoting an upcoming lecture fail to accurately represent the context.

About the gal with the dreadlocks and a fur hood … isn’t that 1) cultural appropriation and 2) animal abuse?

Bring big cans of bear spray. The cans that look like small fire extinguishers. Bring one out and explain that you’ll be happy to discuss your differences but touch you and “it get the spray in the eyes.”

And a supersoaker filled with putrescine.

is the one next to the blonde sheboon a female?

I am a realist – that will not be happening for a long time (if at all) but a guy can dream can’t he?