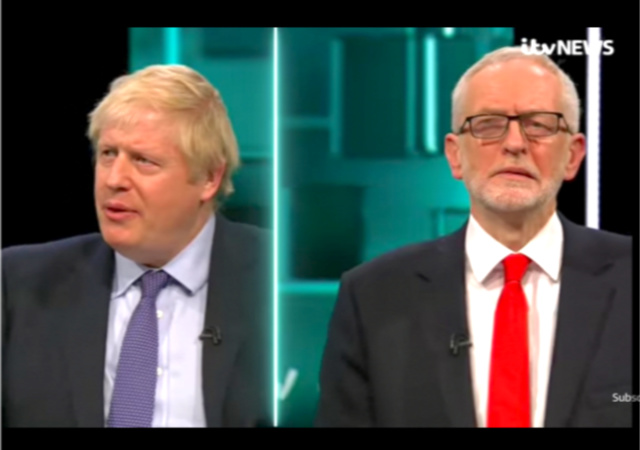 “Boris Johnson’s Tories have established their biggest lead over Labour for two years,” the British newspaper The Telegraph reported. With less than three weeks to go until the December 12 election, the Conservative party is “on course for 80 seat majority” in the 650-seat Lower House, the newspaper predicted citing a “monthly poll of polls.”

The left-wing newspaper The Guardian gave Conservatives a 19-point lead over the rival Labour, projecting around 47 percent of the total vote. Corbyn’s party trails at 28 percent, with the pro-EU Liberal Democrats slipping to 12 percent, the poll predicted over the weekend.

The upcoming election is not between the ruling Conservative and the opposition Labour party. The voters were divided between those who want to leave the European Union and those who wish to stay.

“Voters seem to have mostly sorted themselves into Leavers and Remainers and they are much readier to switch parties within those groups, than they are to change group,” The Telegraph added, citing polling data.

The Johnson-led Conservative party’s poll numbers began rising early this month after Nigel Farage withdrew almost 360 Brexit Party candidates, to unify anti-EU vote in constituencies where the Tories had better chances of winning. The surge continued after Jeremy Corbyn, a lifelong socialist, presented his plan to ‘nationalize’ critical sectors of the British economy.

Following Farage’s decision, the “Conservatives have successfully squeezed the Brexit Party,” The Telegraph wrote on Saturday. Johnson’s party “now have the support of nine times as many voters as the Brexit Party.”

“The Tories have been buoyed by a better-than-expected reception in Scotland, where they once feared they would lose most of their 13 seats but are now confident of holding almost all of them,” the Irish Times reported on Monday. “They expect to pick up seats from Labour in Wales and across the midlands and the north of England.”

The Labour Party, traditionally a working-class party, is failing to rally the base around Corbyn.

“[O]nly 75 per cent of Labour supporters” expected to turn out for the vote, UK’s Daily Mail projected.

To get people to vote, Corbyn has announced handouts to the tune of hundreds of billions of pounds from free high-speed internet to every home to building 100,000 cheap houses each year.

The Corbyn-led Labour Party set its eyes on migrant voters by promising to loosen the immigration rules and make it easier to get their families over to the UK. The party has pledged to “maintain and extend freedom of movement rights.” The move could double the country’s migrant population by 2030 from the current mark of nearly 10 million, the UK Home Secretary and Conservative politician, Priti Patel, warned.

In what The London Times newspaper described as “an unprecedented intervention into politics,” the UK’s Chief Rabbi Ephraim Mirvis wrote an op-ed criticizing Corbyn for his handling of antisemitism within the Labour Party. Corbyn, who has a lifelong history of making common cause with left-wing and Islamic extremists and terrorist groups, is “unfit for high office,” the Chief Rabbi said in his piece.

“Elections should be a celebration of democracy. However, just weeks before we go to the polls, the overwhelming majority of British Jews are gripped by anxiety,” he explained. “Raising concerns about anti-Jewish racism in the context of a general election ranks among the most painful moments I have experienced since taking office.” 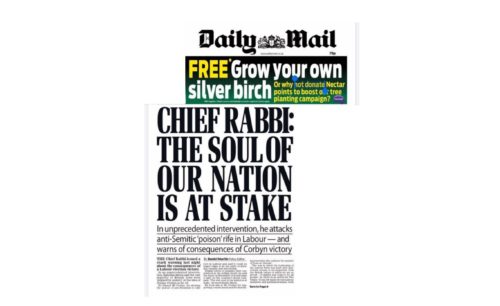 Close to half of the Jews residing in the UK were “seriously considering” leaving the country if Labour wins the December 12 election, a recent poll revealed. A separate survey among the British Jews found that “more than 85 per cent believed [Corbyn] was personally antisemitic,” The Times revealed.

Corbyn, like many other European socialists, sees the growing migrant Muslim population as a replacement for the traditional working class. Radical Muslims, streaming in from the Middle East and Arab North Africa, traditionally share a deep hatred for the Western civilization with their leftist counterparts. Islamists, just like the agitators on the Left, have a penchant for offense taking and grievance-mongering. Not to forget their shared urge to blame someone else for their self-inflicted miseries, especially the Jews.

Keeping Britain’s borders open isn’t some naive virtue signaling on the part of the Corbyn or the Labour Party, but a cynical instrument to re-engineer society and the electoral base. The antisemitic attacks on Jews, much like the violence against women, are just ‘collateral’ damage on the path towards multicultural utopia.

I am admittedly confounded by British politics and parliamentary procedures in general. There was a small Brexit party that just pushed for Brexit and there is a larger Conservative party that pushes for Brexit and other conservative things? As an analogy, would this have been akin to the Tea Party and Republicans if Tea Party agreed to stand down in return for Republicans to adopt actual conservative, small government policies? That way they could join forces to defeat Democrats at the polls?

3
notamemberofanyorganizedpolicital in reply to buckeyeminuteman. | November 26, 2019 at 1:28 pm

I do like how the Leftists in both the UK and U.S. are self-destructing and giving more support to real conservatives.

You are roughly correct; and what happened earlier this fall is that Boris tried to get his party to use their majority to pass Brexit, which they supposedly supported, and 20 or so of his own members turned Deep State on him and dropped out, depriving him of a majority so that nothing could be passed.

So, they spent a month doing nothing except argue bitterly since no one could get a majority to do anything, until finally Boris pushed the anti-Brexiters into agreeing on new elections.

And now, it looks the new elections are going to result in about 100 of the Anti-Brexit MP’s getting kicked out (accounting for ALL parties) and about 100 pro-Brexit MP’s being elected in their place. Nice to see Parliament finally coming around to being on the side of the People.

In some Muslim countries today Jews and Christians are imprisoned, raped, tortured, and even killed with the full blessing of the law. Don’t underestimate how appealing some secular-minded progressives find that.

I can’t help but think the open borders fetish progressives have is at least partially a desire to eliminate the hated Jews and Christians.

2
notamemberofanyorganizedpolicital in reply to Recovering Lutheran. | November 26, 2019 at 1:29 pm

This is what Progressives bring you.
(Hey wasn’t Hitler a Progressive?)

Boy, 5, Thrown From Mall Of America Balcony Is Walking And Attending Kindergarten

What’s really amazing and amusing about all of this is how Jeremy Corbyn has totally destroyed the Labour Party – a party that had unquestioned majority support in the Tony Blair days is now down to 28% and dropping.

Labour has always been called the “natural” political home for Jews in the UK. With the Chief Rabbi and other prominent leaders going public and asking Jews to drop any support for Labour because of Corbyn’s blatant jew-hatred, Labour could very well be ruined forever. It very well may become nothing more than a radical fringe Islamist party.

Last numbers I saw had Labour with 13% of the Jewish vote. I’m surprised it’s that high.
I’ve never seen a major political party so openly accepting of antisemitism. It’s frightening that they have in 28% support.

There are a lot of people in the UK, not just Muslims, motivated by fanatic Jew-hatred.

But then, look what is lurking openly here.