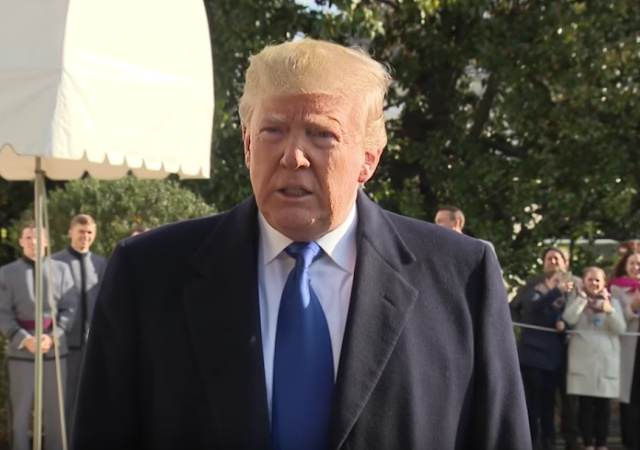 He touched on many subjects, including the impeachment inquiry, the whistleblower, Russia’s May Day parade, and Michael Bloomberg entering the presidential race.

Zaid tweeted about impeaching Trump back in 2017.

President Trump: “The whistleblower is a disgrace to our country” https://t.co/WTym8ZdUOM pic.twitter.com/1ANobAsOzN

Trump demanded Congress not to hold public impeachment hearings. He called it a “hoax” and compared it to “the Russian witch hunt.” He’s also “not concerned” about any of the testimonies given to Congress.

Trump demands that there be no public impeachment hearings. pic.twitter.com/hMNufeL758

President Trump: “They shouldn’t be having public hearings. This is a hoax. This is just like the Russian witch hunt.” pic.twitter.com/n0vRa29xgT

President Trump: “I’m not concerned about anything. The testimony has all been fine.” pic.twitter.com/RShkvZbhcI

When asked about US Ambassador to the European Union Gordon Sondland, Trump said he hardly knows “the gentleman.” Sondland recently changed his testimony to Congress, saying there was a quid pro quo for Ukraine aid.

Sondland donated $1 million to Trump’s inauguration. Trump spoke highly of him only a month ago.

Trump on Gordon Sondland, his Ambassador to the EU and a man who donated a million dollars to his inauguration fund: “I hardly know the gentleman” pic.twitter.com/stlWZzoDoT

I would love to send Ambassador Sondland, a really good man and great American, to testify, but unfortunately he would be testifying before a totally compromised kangaroo court, where Republican’s rights have been taken away, and true facts are not allowed out for the public….

Trump said he “welcomed the chance to run against” Bloomberg. Trump claimed Bloomberg “doesn’t have the magic to do well,” but will “spend a lot of money.”

President Trump reacts to Michael Bloomberg’s potential 2020 run: “Little Michael will fail. He’ll spend a lot of money. … There is nobody I’d rather run against than little Michael” pic.twitter.com/wfcFZs0A1B

This part bothers me. I know Trump did not collude with Russia, but Russian President Vladimir Putin is no friend to America or anything that we stand for.

President Trump says he may attend Russia’s May Day Parade: “It’s a very big deal, celebrating the end of the war. … I would love to go if I could” pic.twitter.com/MIEJGGxmIi

No, do not go. We only allied ourselves with Josef Stalin because Hitler betrayed him and we knew we needed more strength on the Eastern front.

I’m hoping he said it to troll the media and the left. I really do.

Here is the full press conference:

Trump is probably happy to see Bloomberg run. It opens up the possibility of a 3-man race next year, and that means the vote percentage needed to win a state’s electoral vote goes down.

Think about this: Bloomberg is not delusional enough to think he will win a majority of delegates in the primaries. He is going for a Brokered Convention, where he could leverage a few hundred delegates and boatloads of money into a nomination. Do you really think Bernie or his supporters will accept Bloomberg the Billionaire as their nominee? I don’t think so. In this scenario, Bernie runs Indie.

And consider this: If Warren or Sanders wins the nomination on the first ballot, will Bloomberg accept it? I doubt it, and think he runs as an Independent.

Alternatively, if the Convention awards the nomination to Biden, Buttigieg, or Hillary, there is little reason for the far left or Bloomberg to run 3rd party.