She sits in judgment. 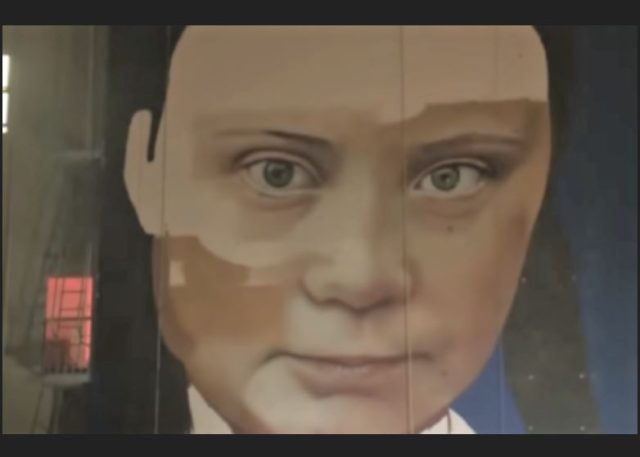 We have covered the rapid deterioration of public health conditions in California, especially in the feces-strewn streets of San Francisco.

Instead of focusing on issues of sanitation, job creation, or at least ensuring there are more high school students than drug addicts in the city, activists have chosen to honor Swedish “climate crisis” activist Greta Thunberg with a giant mural that will grace the skyline.

The mural is still a work in progress, as Cobre is spending his days hoisted high up on a platform about 10 stories above Mason street, on the side of the Native Sons building near Union Square.

Thunberg is the 16-year old from Sweden who has inspired young people all over the world to take to the streets and let older people know they want climate change to be taken seriously.

“What I want from people is to realize have to do something for the world,” Cobre said. “Otherwise, it’s going to be the beginning of our extinction.”

The only thing likely to go extinct in the next 12 years is the San Francisco tax base, as current residents plan their departure to less virtue-signalling locations.

The survey, conducted by San Francisco’s Office of the Controller, found that 35% of respondents were either “very likely” or “somewhat likely” to move out of San Francisco in the next three years. Residents under the age of 35 were the most likely to want to leave and — no surprise here — renters were about twice as likely as homeowners to be thinking of bailing.

The exodus to less social-justice focused locations is being helped by regulations that are killing the city’s once renowned restaurant industry. The city is being served a very cold dish of economic realities paired with a sparking infusion of real human needs.

San Francisco was once known for trendy restaurants with lines out the door. Today, the city’s restaurateurs are concerned with keeping their doors open at all. Restaurant closings outpace openings by 9%, according to Yelp data analyzed by the Golden Gate Restaurant Association. In a recent meeting with the Board of Supervisors, one industry veteran said: “We need to do something now, or we will be gone.”

How did the outlook for a top restaurant city get so bleak? As Hemingway wrote of bankruptcy, it happened “gradually and then suddenly.”

Start with labor costs, which the San Francisco Chronicle identified as “the biggest factor.” In 2003 residents passed an initiative that set the minimum wage almost $2 above the state level and then linked it to rise with inflation. A decade later, another initiative incrementally lifted the wage floor to $15 an hour by 2018. On top of this, the city has separate ordinances regulating paid sick leave, employee health-care spending and workplace scheduling.

And while San Francisco’s elites can point to the success of its Big Tech industry, small businesses are struggling to stay alive.

That was one of the conclusions of a panel of small business people held October 29 that was sponsored by the United Democratic Club. The panel was entitled, “The Cost of Doing Business: Can Small Business Survive in San Francisco?”

Referring to Manny Yekutiel, a gay man and owner of the eponymous year-old cafe in the Mission district where the event was held, Mandelman said, “business owners shouldn’t have to be as superhuman as Manny is to survive” in San Francisco. Yekutiel “has worked his ass off” to schedule excellent programming, said Mandelman.

According to Mandelman, small business owners in the Castro say their biggest challenge is that they “don’t know who is going to come in through the front door.” Panel members described incidents where people with substance abuse or mental health issues threw things at workers or customers and disrupted business.

But at least visitors to San Francisco can enjoy the giant face of Thunberg as they dodge feces and avoid aggressive pan-handlers on their way to find a restaurant that hasn’t closed.

However, given all its regulatory antics, perhaps the mural is now truly more representative of San Francisco than the Golden Gate Bridge. Big Sister is watching!

People think the “portrait’ resembles Vladimir Putin. Which is fitting given the “leaders” of San Franfecesco are pseudo-Marxists. A smelly, filthy, disease ridden, unwashed, homeless filled, polluted city with a fouled harbor is going to be made better with a “Big Brother” style wall mural of a deranged, brainwashed Envirowhacko teenager? Good luck with that.