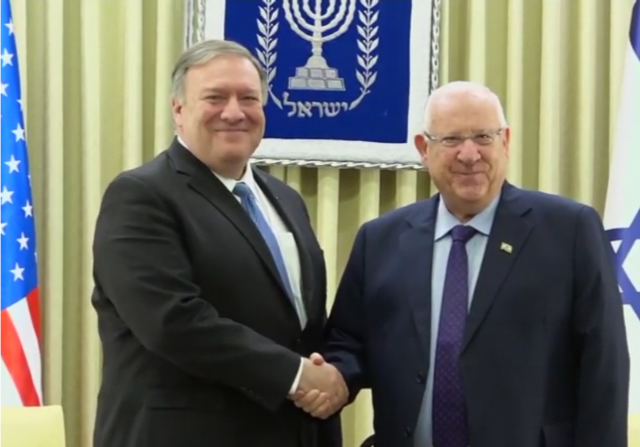 Secretary of State Mike Pompeo announced a major policy shift on Monday by declaring that the United States no longer considers Israeli ‘settlements’ to be illegal under the international law. The statement reverses the U.S. State Department’s long-held policy that regarded Israeli ‘settlements’ in the region of Judea and Samaria, also referred to as the West Bank, “inconsistent with international law.”

“Calling the establishment of civilian settlements inconsistent with international law has not advanced the cause of peace,” he said. “The hard truth is that there will never be a judicial resolution to the conflict, and arguments about who is right and who is wrong as a matter of international law will not bring peace.”

The United States on Monday effectively backed Israel’s right to build Jewish settlements on the occupied West Bank by abandoning its four-decade-old position that they were “inconsistent with international law.”

The announcement by Secretary of State Mike Pompeo was a victory for Israeli Prime Minister Benjamin Netanyahu, who is struggling to remain in power after two inconclusive Israeli elections this year, and a defeat for the Palestinians.

Pompeo said U.S. statements about the settlements on the West Bank, which Israel captured in 1967, had been inconsistent, saying Democratic President Jimmy Carter found they were not consistent with international law and Republican President Ronald Reagan said he did not view them as inherently illegal.

“The establishment of Israeli civilian settlements is not, per se, inconsistent with international law,” Pompeo told reporters at the State Department, reversing a formal legal position taken by the United States under Carter in 1978.

Israeli Prime Minister Benjamin Netanyahu welcomed Secretary Pompeo’s announcement. “The United States adopted an important policy that rights a historical wrong when the Trump administration clearly rejected the false claim that Israeli settlements in Judea and Samaria are inherently illegal under international law,” Israeli Prime Minister said. “This policy reflects an historical truth – that the Jewish people are not foreign colonialists in Judea and Samaria. In fact, we are called Jews because we are the people of Judea.”

According to U.S. Ambassador to Israel David Friedman, the U.S. declaration would further the cause of peace in the region. “I am pleased that the effort has concluded and that the secretary’s conclusions have been published,” Ambassador Friedman told the Jerusalem Post. “I believe that they will bring truth and clarity to the Israeli-Palestinian conflict and advances the cause of peace.”

Monday will long be remembered as a turning point in Middle East history. US Secretary of State Mike Pompeo’s statement Monday that Israeli settlements are not illegal per se is the most significant shift in US Middle East policy in the past generation. Jerusalem’s status as Israel’s capital has been a matter of US law since 1996. (…)

Pompeo made two revolutionary assertions in his statement. First, he said that “after carefully studying all sides of the legal debate,” like the Reagan administration before it, the Trump administration has concluded, “The establishment of Israeli civilian settlements in the West Bank is not per se inconsistent with international law.”

Second, Pompeo noted, the near ubiquitousness of the false assertion that settlements are illegal has not advanced the prospects for peace. To the contrary, it has harmed the chances of getting to peace.

Predictably, the European Union condemned the U.S. policy annoucement. “All settlement activity is illegal under international law and it erodes the viability of the two-state solution and the prospects for a lasting peace,” the EU said in statement. “The EU calls on Israel to end all settlement activity, in line with its obligations as an occupying power.”

Israel took control of Judea and Samaria area, also referred to as the West Bank, in the defensive war of 1967. Syracuse University Professor Miriam Elman wrote a detailed post for Legal Insurrection making the legal case for Israel’s ‘settlements.’

Related: You can read about Professor Jacobson’s visits to settlements in Samaria in 2013, To Samaria and back

Milhouse: You’re deliberately misrepresenting your sources. They’re absolutely not about “Palestinians”, but about Middle Easterners generally.

Hammer et al: “A multidimensional scaling plot placed six of the seven Jewish populations in a relatively tight cluster that was interspersed with Middle Eastern non-Jewish populations, including *Palestinians* and Syrians.”

Milhouse: Not of so-called “Palestinians”.

Palestinians were specifically fractured off.

Milhouse: But “Palestinians” are not a distinct entity from other Arabs

The Palestinian male lineage is closer to most Jewish groups than it is to most Arab groups, including inhabitants of the Arabian peninsula.

Milhouse: and the vast majority of them were recent immigrants

The genetic evidence from the y-chromosome is that Palestinian males and Jewish males are essentially one population, having diverged in the late Neolithic.