“The story has been corrected, and the journalist responsible has been terminated.” 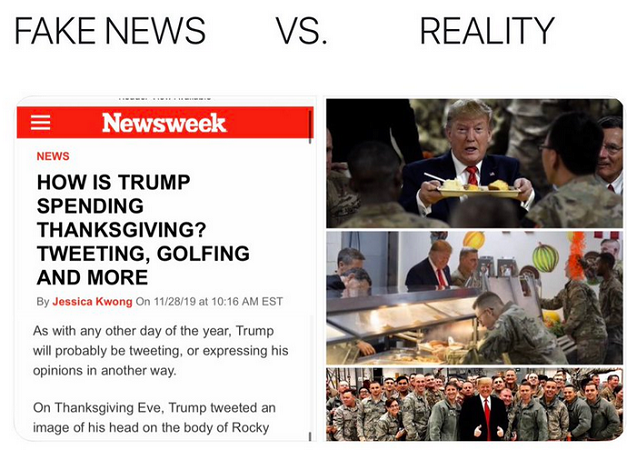 As Legal Insurrection readers are aware, President Trump spent his Thanksgiving in Afghanistan serving Thanksgiving dinner to our troops and personally thanking them for their service to our great country.

Meanwhile, over at Newsweek, one of their reporters published an article that claimed Trump would spend Thanksgiving “tweeting and golfing.”  The internet blew up over what was widely perceived as lazy/inaccurate and even biased reporting.

The president himself weighed in and as of Saturday, the writer, Jessica Kwong, has been fired from Newsweek.

The original article was, according to the editor’s note, “substantially updated and edited at 6:17 pm EST to reflect the president’s surprise trip to Afghanistan. Additional reporting by James Crowley.”

Trump headed to Afghanistan to surprise U.S. troops on Thanksgiving https://t.co/f7Xeqz1ZGQ Deleting this tweet because it was written before knowing about the president’s surprise visit to Afghanistan-an honest mistake. Story has already been updated, as shown in the screenshot. pic.twitter.com/g9CfPaV2kQ

The pushback to her nonapology apology was immediate.

It wasn’t an “honest mistake” you tried to dunk on Trump and ended up dunking on yourself because you couldn’t resist. Notice how there’s never been a story that broke in Trump’s favor & had to be corrected the other way? These aren’t mistakes, they are a very consistent pattern. https://t.co/HmyrHrOjqB

Why would you write the story without having any of the facts?

This was my exact question… the entire original story had no basis in fact and was just speculation.

The president responded with good, if biting, humor.

Apparently, Newsweek took notice because they have since let the reporter go.

The Newsweek reporter who wrote an inaccurate story about President Trump’s Thanksgiving Day plans has been fired. The outlet’s original story claimed the president only planned on tweeting and golfing during his holiday break, neglecting to mention his trip to Afghanistan.

Newsweek’s Jessica Kwong, whose Twitter handle identifies her as a political reporter “covering Trump administration and family,” initially published the article Thursday morning, before the president’s trip to Afghanistan was announced publicly. The story’s initial headline was, “How is Trump spending Thanksgiving? Tweeting, golfing and more.”

“Newsweek investigated the failures that led to the publication of the inaccurate report that President Trump spent Thanksgiving tweeting and golfing rather than visiting troops in Afghanistan,” a Newsweek representative told the Washington Examiner. “The story has been corrected, and the journalist responsible has been terminated. We will continue to review our processes and, if required, take further action.”

The Washington Examiner updated their above story with the following:

Kwong told the Washington Examiner that she was assigned to write a story about what the president was doing on Thanksgivinga week in advance and filed it to her editors on Wednesday. Then, she explained that she sent a message to the editor on duty with the president’s latest actions and the editor published the piece. That editor decided to have a reporter write a new story on Trump’s surprise trip to Afghanistan, and neglected to update Kwong’s original piece in a timely manner.

I hate to hear of anyone losing their job, particularly during the holidays, and it seems there may be more to the story given the anti-Trump culture at progressive outlets. Why wouldn’t Kwong’s piece be immediately revised / updated or (better) pulled the second it was learned that it was false?  Who made that decision and why?

The severe Trump derangement that permeates the leftstream media is bound to, and very often has, resulted in just this sort of sloppy publication of inaccurate and even of apparently fabricated nonsense.  Letting one reporter go is not going to solve the deeper issues that have resulted in the public’s general distrust of the media.

Newsweek is still in business?

And yet, these same entities add to their “Trumps Lies” list, every time he tweets or says the words “fake news”

Lest anyone have sympathy for Kwong, as I initially did, a quick romp through Bing demonstrates that she saw her job as smearing Trump and his family 24/7.

Biden, Pelosi, Kerry, Obama and Clinton are guilty of massive conspiracy of extortion and bribery and theft in the US/Ukraine foreign aid kickback plot.