In since-deleted tweets, Conway uses the fake photo as “evidence” that Stefanik is “trashy” 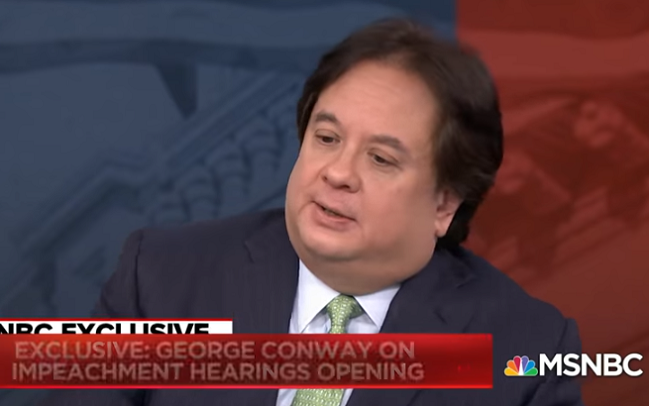 Kellyanne Conway’s NeverTrump husband lit up the internet on Saturday with his disgusting smear of Rep. Elise Stefanik (R-NY).  Not content to call her “lying trash,” Conway was also instrumental in spreading a fake photo of the respected congresswoman depicting her “flipping the bird” to reporters.

George Conway @gtconway3d deleted these tweets in which he shared a fake photo of @EliseStefanik giving the middle finger at the hearing yesterday.

But the internet lasts forever. pic.twitter.com/yGfIxD7orf

Jerry Dunleavy asks if Conway will apologize for spreading disinformation.  To date, the answer is “no.”

Stefanik responded to his now-deleted tweets.

The photoshopped picture that the Leftist Twitter mob led by George Conway is circulating is FAKE – I’ve been so busy exposing Adam Schiff’s #regimeofsecrecy that I haven’t had time for a manicure in weeks! 💅 Proof from yesterday 👇 https://t.co/TSnTu4bFtX

It is completely mind-boggling that a thinking person could fall for such an obvious photoshop.

First, the image is so obviously phony that you have to wonder what on earth made Conway think it could possibly be real.  Second, how can you not doubt its authenticity on the grounds that it’s a.) a Twitter creation and b.) no member of Congress would make that gesture in front of reporters (yes, I include even AOC plus three in that statement; I would be highly suspicious of any photo showing one of them doing this in this context).  Third, how out of touch do you have to be to not know that this sort of photoshop always crops up (from both left and right) after the latest installment of the Democrat/leftstream media partisan impeachment circus?

In addition to his unhinged attacks on Stefanik and his spreading of a clearly photoshopped image to condemn her, Conway is reportedly telling people in DC that his wife is a member of a “cult.”

George Conway reportedly wants to make his marriage with White House counselor Kellyanne Conway last but has been telling those around him she will have to get out of the White House “cult” first.

Three sources close to George told Vanity Fair this week that he has begun to grow distant from Kellyanne since the start of the impeachment proceedings against President Trump.

“He tells people she’s in a cult,” one of the sources said, while a friend of his added, “He’s going through a tough time.”

“It’s not going to get better until she’s cast out of the cult,” another source said.

The sources alleged that he is still in love with his wife but said she needs quit working for the president before they “can make it work.”

Perhaps Conway’s behavior is geared toward making his wife’s position in the White House untenable?  Or perhaps he’s just completely lost his mind to a very serious case of Trump Derangement Syndrome?  Maybe both?

Whatever his problem, taking it out on Stefanik was a bad move and cast him and the ever-shrinking NeverTrump horde in a horrible light.

This man is not well to be doing this.

He would have to think that the whole project of getting rid of Trump rested on him to be the husband of KellyAnn and still do this.

I think all of us if we were married to an Obama appointee might be cheering for Obama to lose but we would not have such an inflated view of ourseves to think it would or would not happen without our contribution.

We all would stand-by because of our marriage and let others who DON’T have their marriage on the line do the work.

I can’t understand why Kellyanne is married to that morbidly obese, balding and with a bad haircut cretin in the first place. She ought to cut her losses.

Woman is a damn saint if ya ask me.