Stefanik: “THANK YOU to all of my supporters — we raised $500K in UNDER 2 HOURS last night! I am deeply honored and overwhelmed by all of your support and will continue standing up for FACTS and #NY21” 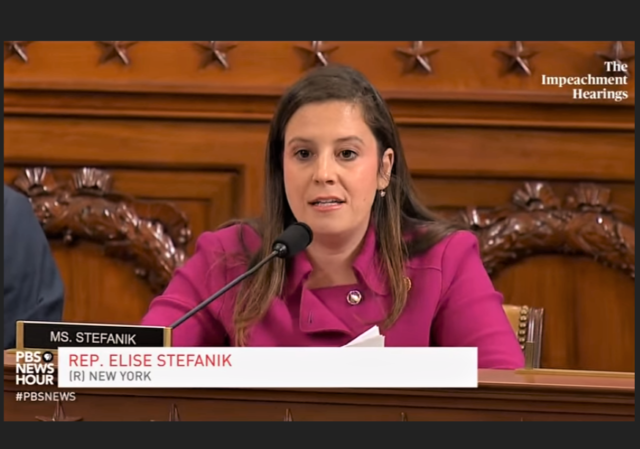 He also called for his NeverTrump followers to contribute to her Democrat opponent’s campaign.  As I noted at the time, this is a questionable request by a self-proclaimed Republican.

Clearly, Stefanik has hit a nerve.  Conway himself seems to have donated the maximum amount allowable by law . . . to a Democrat.

A Democrat, by the way, who supports DACA, anti-Second Amendment gun control, “green energy” and planning for “future repercussions from climate change,” and social justice, including the claim that universal healthcare and “quality education” are rights.  Exactly, in other words, the sort of politician you would expect a NeverTrump Republican to enthusiastically support.

Conway even bragged about donating the maximum allowed by law to Stefanik’s Democrat challenger.

I just gave the legal maximum. If you believe in truth in politics and in the rule of law, you should give what you can as well. https://t.co/KztHswmYoT pic.twitter.com/ukfNr66ipP

Stefanik immediately countered with calls to help her own campaign in light of the influx of cash going to her opponent.

It's VERY Clear. Far-left Dems & Never Trumpers CANNOT handle the Truth. That's why they are launching disgusting smears & doctoring photos of me in a sick attempt to intimidate me. Thx for proving that our side is WINNING. Donate NOW to help me fight backhttps://t.co/MlLBNmCor4

Within two hours, the site had garnered $500k in donations to help Stefanik’s reelection bid next year.

THANK YOU to all of my supporters — we raised $500K in UNDER 2 HOURS last night! I am deeply honored and overwhelmed by all of your support and will continue standing up for FACTS and #NY21. Join me in this fight and donate today! https://t.co/tVW9NvZSMx

She couldn't have done it without you @gtconway3d https://t.co/ySeXEIQhj8

Stefanic is a bit liberal for my taste, but in the era of Ron Paul Moneybombs, you might wish to take care who you attack.