“No matter how the situation in Hong Kong changes, it is very clear that Hong Kong is a part of Chinese territory.” 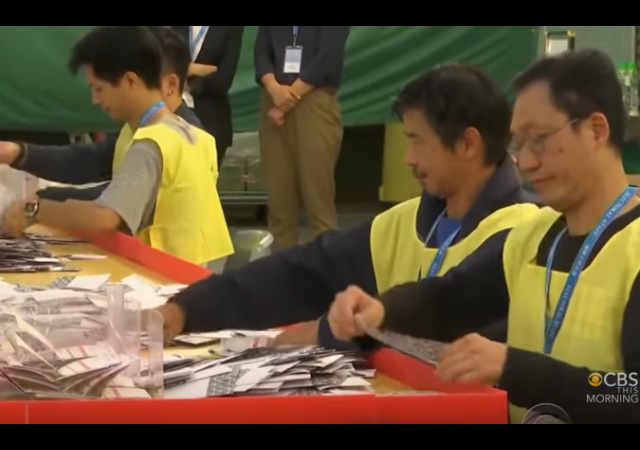 Pro-Democracy protestors prevailed in Hong Kong this weekend, as its candidates decisively won nearly half of the seats on the ballot.

So far, pro-democracy candidates have won 269 out of 452 seats in 18 district council races, while pro-Beijing forces, who previously held 73 percent of the seats, have only won 30. Voters came out in droves — with a 71 percent turnout — up from 47 percent four years ago in the same elections, according to the Electoral Affairs Commission.

“This is political annihilation for Beijing and it’s going to have consequences that are going to reverberate not just in Hong Kong itself, but perhaps in China as well,” Asia analyst and foreign affairs journalist Gordon Chang said on Fox News’ “America’s News HQ” Sunday.

Initially, Beijing tried to brush aside the landslide defeat for the pro-establishment candidates by heavily censoring the results on the mainland.

State media preferred to focus on calls for law and order to be preserved and the accusation that Western countries had been instigating unrest.

Many official media outlets only ran brief reports on the vote, with state news agency Xinhua declining to report the results, in which the pro-democracy camp took control of 17 out of 18 councils.

Then, the Chinese issued a stern warning to the city and its newly elected representatives.

China’s government has responded to a stunning landslide victory for pro-democracy candidates in the Hong Kong elections by emphasising that the city will always be ruled from Beijing, and warning against further protest violence.

The foreign minister, Wang Yi, warned against “attempts to disrupt Hong Kong”, as a few hundred people took to the streets again in support of protesters holed up in a university that has been under siege by police for over a week.

“No matter how the situation in Hong Kong changes, it is very clear that Hong Kong is a part of Chinese territory,” he told reporters on the sidelines of the G20 meeting in Tokyo. “Any attempts to disrupt Hong Kong or undermine its stability and prosperity will not succeed.”

We will have to see if the ballot is stronger than the bullet…or the tank.

Their fate was sealed decades ago. They need to leave while they still can.

It is a simple situation. Hong Kong is a better place to live than mainland China. The people of Hong Kong are vigorous and productive. They enjoy a much higher standard of living than the people of mainland China, and yet their government does not control every aspect of their lives.

Instead of expressing its envy and desire to enslave these people, the government of mainland China should go visit them, and humbly ask the secret to their prosperity.

Americans think we know the answer. Apparently HKers agree with us. That’s why the HKers have been flying American flags at their protests. They are better at ordering their own lives than the looming tyrants.

God help them, and grant them the means to preserve their way of life.

There’s no magic here. The secret of their prosperity is that they have a tax advantaged status (vs. other Chinese ports) and are one of the best physical ports in the world. Obviously lots of people are used to doing business through HK.

But now those business users of HK are getting used to Singapore instead. A lot of them didn’t want to be associated with people “freely” tearing up brick pavements, using bricks to block roads, throwing thousands of Molotov cocktails and dropping them from high places into low places, building a catapult to catapult those bricks.

The very primitive (though brutish) nature of everything they did in their military action shows the real “high tech” contribution of HK. None. They are a free port, a business center, and that’s all.

Ok, I see the ad for Amazon smile: is it for real?

The ballot is only stronger than the bullet when the voters have the bullets. Otherwise, it is a fantasy world HKers are in right now. They are dealing with a government with a history of wiping out far larger numbers of people for the communist ideology. Xi & Co. moved too soon as HKers have a memory for rule under Britain. Slow erosion as the Left had used in the West is a better time table.