Killed in the Battle of Qala-i-Jangi (11-25-2001). John Walker Lindh, the American Taliban interrogated by Spann just before Spann was killed, was released from prison last May. 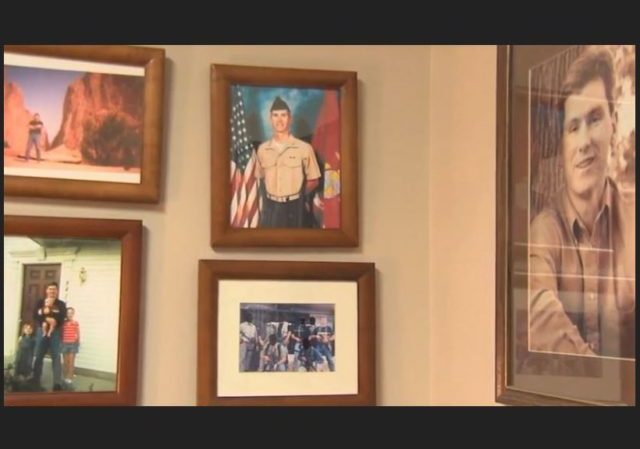 For many years, on November 25 and also Memorial Day, we have remembered Johnny Micheal Spann, a CIA Operations Officer who was the first American killed in Afghanistan after 9/11.

We have told Spann’s story many times, but it never gets old. Our 15th Anniversary post summed up much of what we had learned, 15th Anniversary: Johnny “Mike” Spann, first American killed in Afghanistan. 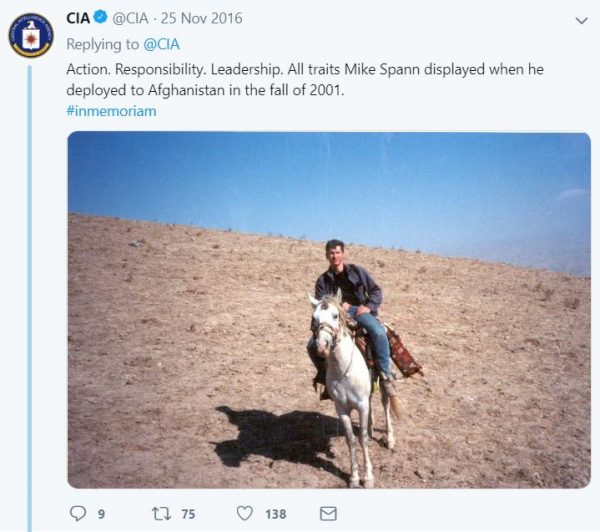 One of those memories for me was the story of Johnny “Mike” Spann, from Winfield, Alabama, the first American killed [in Afghanistan] in the Afghanistan war, on November 25, 2001.

Spann’s wife Shannon also worked for the CIA.  In addition to his wife, Spann left behind two daughters and an infant son

Spann’s family established a website to honor his life, and there is a wealth of information and photos at his Arlington National Cemetery page.

There is an interesting honor paid to Spann at the website of Afghan General and Warlord Abdul Radhis Dostum, including a link to a photo of the memorial to Spann at the site of the uprising in which he died.

So in these days in which we remember those who died on 9/11, let’s also remember Johnny “Mike” Spann, who died in the weeks immediately after 9/11 on a battlefield far from home, and who against seemingly impossible odds helped pave the way for the overthrow of the Taliban, and over nine years later, the justice delivered two days ago. 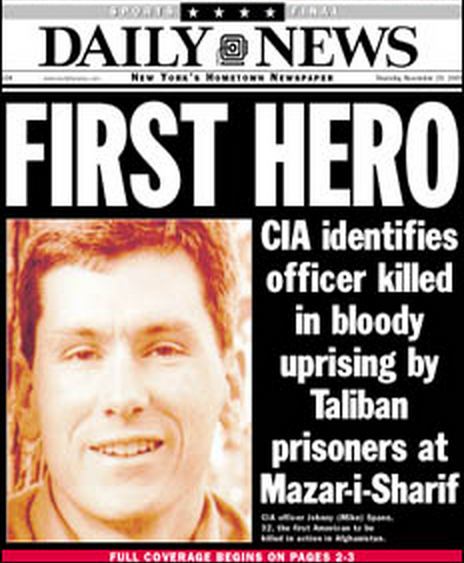 In over a dozen posts since 2011, we have continued to document various aspects of Spann’s life and death, including his family:

The big news this year was the release of John Walker Lindh in May, which was the subject of several posts. 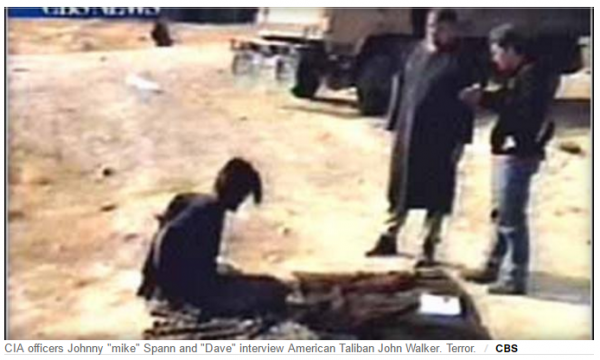 I’ve not been able to find out where Lindh went after his release, and he has stayed out of the news The most recent information is that he was released in Virginia.

So there’s not a lot new to report, but it’s important to remember what we already know.

A Marine before Obama infected it with turds.

False and misleading statements by Mr. Frank Lindh omits many known facts. Article of appeal by Johnny Spann February 01, 2006. This rebuttal of statements and claims made by Frank Lindh, father of John Walker Lindh, will address these issues.

Frank Lindh is pushing for an official pardon or clemency of his son for the Al Queda activities of which he is known to have been involved. These activities came to the public’s attention in November of 2001, and involved the death of my son, Johnny Micheal Spann, a CIA agent sent to interview the prisoners at the Qala I Jangi fortress outside Mazar E Shiref.

2.John Walker Lindh was a member of, and trained with Al Queda. Al Queda is a league of foreign fighters who are trained by Osama Bin Laden. Members of this group of fighters are typically not citizens or natives of Afghanistan. John Walker Lindh was not allowed to join the Taliban, because he did not speak any of their languages like Dari or Postum, and was not a Afghan. But was allowed to join and train with the Al Queda. The Taliban harbored Bin Laden and his Al Queda terrorist.

5.After trying to join the Taliban and being refused. John Walker Lindh trained at AlFarooq – Osama Bin Laden’s terrorist training camp -and has officially stated that he met and talked to Bin Laden more than once while in this training. He also stated he spent time at Bin Laden’s guest house.

6.John Walker Lindh stated that he had knowledge of the plans for the 9-11 attacks against the U.S. He stated that he knew that Al Queda members had been sent to the United States to carry out suicide missions. He stated that he had also been told about the 9-11 attacks on America, but chose to stay and continue to fight with the Al Queda terrorists.For all Lindh knew, his own family members could have been victims of the suicide missions. Frank Lindh claims that his son was not responsible for 9/11 attacks, and that he had nothing to do with them. He is not telling that he not only knew about the
plans, but also opted – as an American – not to alert anyone about his knowledge. Lindh stated that after training camp he was asked if he like to go to other places to carry out terrorist activities, This proves he was just like the rest of the trainees or he would never have been ask to go.

7.John Walker Lindh sent an email to his mother stating that the attacks on the USS Cole were justified, and that he did not care if he ever set foot in America again.

9.John Walker Lindh surrendered with the other terrorist Al Queda fighters at Kundus, having retreated there from Takar. He did not let anyone know that he was American, or that he wanted to leave. (He stated that he was told to say that he was Irish if anyone should ask).

10.John Walker Lindh was transported to Qala I Jangi Fortress on Saturday evening,November 24, 2001, and stayed in the basement house, also known as the Pink House,that night.

11.The revolt was planned that night while at the Pink House.Two of the prisoners stated that everyone there that night had to choose if and how they were going to be involved.

12.Sunday morning, November 25, 2001, my son and his partner arrived at the prison.During this time Micheal Spann attempted to question John Walker Lindh. This encounter was captured on the, approx. 2 hours of video, being filmed by General Dostum’s soldier.The prisoners being interviewed were led one at a time, from the Pink House to an open courtyard. They were lightly restrained with their elbows tied behind their back. This left their hands free to the front. This was the afghan way of restraining.John Walker Lindh was one of these prisoners. After being asked to identify himself,(practically begging him). He would not talk to his fellow Americans, and yet another opportunity went by to tell someone whom he was and that he needed help. John Walker Lindh also did not inform Mike Spann, or any other American there, about the planned revolt.If that information had been shared it would have saved my son’s life.

13. At approx. 11 AM Sunday Morning, as planned on Saturday evening by the prisoners, a grenade was thrown to signal the attack. This is verified on the two-hour video.The prisoners inside the Pink House, which were approx. 300, began their attack against the guards, and the Americans. The prisoners in the courtyard, which only had their elbows tied, jumped to their feet and attacked my son, Mike, from behind while he was engaging the terrorist that were charging him from the basement house.This is verified in the FBI documents released in late 2004, of interviews with prisoners at Guantánamo Bay. which have the accounts of that attack how it started and what ensued. Additionally, two doctors and other northern Alliance soldiers that I personally talked to in Afghanistan, stated that they were within feet of Mike when the grenade was thrown by the terrorist to start the revolt. John Walker Lindh jumped to his feet to take part, just like the other terrorists,and was shot in the leg. ( His father says he jumped to his feet to run)

14.John Walker Lindh, and the others in the courtyard, retreated to the basement house (Pink House), and continued to fight the Northern Alliance and the Americans.On the second day, the Northern Alliance sent Red Cross workers inside to get them to surrender, and John Walker Lindh, and his fellow terrorist fighters, killed them. Some 5 days later they finally surrendered.

16. Frank Lindh maintains that the terrorists’ prisoners were beaten.This is blatantly false.I personally have a copy of the original video, which clearly shows that no beatings took place.It is documented on the video that two doctors were brought to the site and were treating and tending to the wounds of the terrorist prisoners.There was no violence at all until the grenade was thrown to start the revolt. This is also shown on the video. This is only a portion of information that Frank Lindh is not making public during his quest for his son’s pardon.The facts stated in this letter are documented in the following ways:

•Video from General Dostum, taken the morning of the attack, which is the video the French reporter obtained and sold to CAPA TV, which in turn sold a small portion to 3 American TV news networks. This small portion was then shown on television showing Mike Spann trying to talk with Lindh.

•Reports of the attack given by the prisoners at Guantánamo Bay and released by FBI,

•Eyewitness accounts: including the accounts of two Afghan doctors that I personally spoke with while visiting Afghanistan. A Northern Alliance intel officer, and several northern alliance soldiers. The two doctors and the intel officer are shown on the video.

•Information given to Mark Kukas, by two prisoners in Shurbergon prison.

•Information supplied by Robert Pelton, whose letter is attached.

* Information given to me by General Dostum and his staffAs an American, and one of many parents who have lost a child to war in order to protect our country, I appeal to you to not allow Frank Lindh to achieve a pardon for his Al Queda, terrorist, traitor son, John Walker Lindh, Aka: Sulleyman al Farris, Aka: Abdul Hamid.

I remember the debate and gradual extinction of the death penalty in most states. States that outlawed the death penalty would promise that truly evil people would spend the rest of their natural lives in prison. And so, the bills were passed.

Charles Manson was never turned loose, but he would periodically come up for parole, and the families of the slain were left to revisit their terrible memories and oppose his release. I was saddened for the family every time that happened. I thought it a singularly graceless, continuing injury to those who mourned. The State of California shows mercy only to its prisoners.

John Walker Lindh should be dead. Instead, he has been released, out of a certain lack of respect for our country, and for human life.

1
notamemberofanyorganizedpolicital in reply to Valerie. | November 26, 2019 at 7:25 pm

Have you seen this report from Conservative Review?