EU chief Juncker: “We have concluded a deal and so there is not an argument for further delay.” 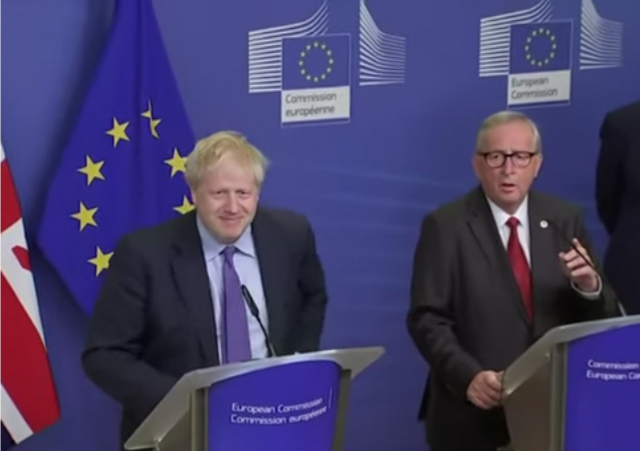 British Prime Minister Boris Johnson has announced a Brexit deal with the European Union ahead of a crucial summit in Brussels. The details of the agreement were announced at a joint press conference with EU Commission President Jean-Claude Juncker in Brussels today.

“We have a great new Brexit deal,” Johnson declared.

“We have concluded a deal and so there is not an argument for further delay,” EU Chief Juncker said referring to the October 31 deadline on which Johnson has vowed to take his country out of the 27-member bloc.

The top EU official also rejected the idea of extending the Brexit deadline –as urged by the British parliament, The Telegraph newspaper reported. “If we have a deal, we have a deal and there is no need for prolongation,” Juncker added.

A Brexit deal has been agreed between the UK and EU before a meeting of European leaders in Brussels.

Boris Johnson and Jean-Claude Juncker called it a “fair” outcome – and the EU Commission President said there was no need to extend the Brexit deadline.

He said: “We have a deal so why should we have a prolongation.”

This will be a boost for the PM, but he still faces a battle to get the deal through Parliament with ex-allies the DUP opposing it.

Mr Johnson urged MPs to “come together to get Brexit done and get this excellent deal over the line”.

He added: “Now is the moment for us to get Brexit done and then together to work on building our future partnership, which I think can be incredibly positive both for the UK and for the EU.”

Johnson will need a majority in the British parliament to implement his deal. Besides the Conservative party, he will need the support of the Democratic Unionist Party (DUP) of Northern Ireland.

DUP, an ally of Johnson-led Conservatives, has opposed the newly announced deal in its current form, but has agreed to find a compromise.

“We will continue to work with the government to try and get a sensible deal that works for Northern Ireland and protects the economic and constitutional integrity of the United Kingdom,” DUP said in a statement.

To see the deal through, Johnson has to get the DUP on board ahead of the Saturday’s vote, when the deal is tabled before the Lower house of the parliament.

“It means that Mr Johnson has 48 hours to try to win over [DUP leader] Arlene Foster and her party in a bid to get his deal over the line on Saturday. Otherwise, he will dependent on the support of 18 rebel Labour MPs,” UK’s Times noted.

The opposition Labour party leader Jeremy Corbyn also came out against the deal.

“As it stands we cannot support this deal. Also, it is unclear whether it has the support of his allies in the DUP, or indeed many of his allies on his own backbenches.” Corbyn said.

The Labour party is opposed to leaving the EU and has renewed the calls for a second referendum.

If Juncker likes it, there’s got to be some poison pill in it for Britain.

So true – the best deal is no deal. EU just wants their billions.

Jeff Taylor has some interesting takes on the Brexit.

Brexit Party leader Nigel Farage discusses Boris Johnson’s Brexit deal and why the House of Commons should reject it.

I know a lot of us have been fans of Nigel, but he always seems to self-sabotage at the last minute, over and over. Sure, this deal may not be perfect, but it’s *something*. If Nigel tries to kill it, what does he think happens next? Boris is making a better effort than anyone previously has done (not to say he’s been completely right) but who does Nigel think will come in if Boris is discredited? It sure won’t be Nigel, the rest of the Parliament despises him.

There are times when you just need to shut up and accept a victory, even if you think it’s flawed.

The question is … is a bad deal better than no deal at all? I can never approve a bad deal under any circumstances. Perhaps it is best to have a new general election and let the remoaners be hopefully defeated.

How do you know this deal is not a sell-out? Farage has been much more trustworthy than BoJo through-out all of this so I lean strongly in favor of rejecting this deal. Accepting “imperfect victories” is how Republicans compromised their way into accepting totalitarianism. “Perfection is the enemy of the good” BS.

The UK has been girding its loins for a no-deal Brexit for months now. All preparations are in place via the WTO for a organized minimally disruptive exit. The worse thing that could happen now if for BoJo to sell-out at the last minute. There are no preparations in place for that contingency and I don’t trust that guy. My instincts are that he has sold out.

I suspect the EU knows that a no-deal Brexit will cost them (as an example) $10 while keeping the UK in makes them $5, so if the EU can’t make the Brits scared enough to keep them in, cutting a deal for the EU to only make $2 instead of $5 makes sense.

(The EU was doing such a good job of scaring the Brits until recently.)

From what Nigel says,it appears the Brits have done a good job of scaring Boris and this new “Great Deal” Boris and Juncker have come up with is nothing more than a repackaged fmr. PM May Terrible Deal. Nigel says it would be better to go for yet another extension than to accept this so called compromise deal.

Personally, I want to see a hard No Deal BRexit with all UK sovereignty restored so the rest of us in Europe can see the UK flourish and be an example to all the rest of us.

Sounds like they got to Johnson with their threats.

Personally, I’d bet he got a deal that he wanted from the EU, because otherwise, he’s happy to crash out and let the EU get nothing.