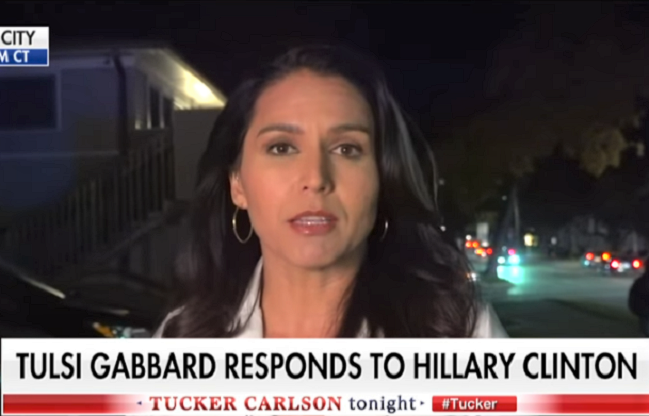 CNN did its level best earlier this week in the fourth Democratic presidential primary debate to contain the anti-establishment fire that burns within Rep. Tulsi Gabbard, but accusations made against her by Hillary Clinton on Wednesday have unleashed it.

Hillary Clinton in a new interview appeared to float a conspiracy theory that the Russians are “grooming” Hawaii congresswoman and Democratic presidential candidate Tulsi Gabbard to be a third-party candidate in 2020, while claiming 2016 Green Party nominee Jill Stein is “also” a Russian asset.

Appearing on former President Obama aide David Plouffe’s “Campaign HQ” podcast, Clinton did not mention Gabbard specifically by name, though Plouffe ended the podcast by noting Clinton’s “belief that Tulsi Gabbard is going to be a third-party candidate propped up by Trump and the Russians.”

“I’m not making any predictions but I think they’ve got their eye on somebody who is currently in the Democratic primary and are grooming her to be the third-party candidate,” Clinton said, in apparent reference to Gabbard. “She’s the favorite of the Russians. They have a bunch of sites and bots and other ways of supporting her so far.”

She then accused Stein, who ran against her and Donald Trump in 2016, of also being an asset of Russia: “That’s assuming Jill Stein will give it up, which she might not because she’s also a Russian asset.”

During the debate on Tuesday, Gabbard had lashed out at debate hosts CNN and the New York Times for characterizing her in recent reports as being a Russian “puppet” and an apologist for Syrian President Bashar al-Assad:

“Not only that, New York Times and CNN have also smeared veterans like myself for calling for an end to this regime change war,” Gabbard said.

“Just two days ago The New York Times put out an article saying that I’m a Russian asset and an [Syrian President Bashar] al-Assad apologist and all these different smears. This morning a CNN commentator said on national television that I’m an asset of Russia.”

Tulsi Gabbard calls The New York Times and CNN — the hosts of the debate — "completely despicable" for alleging she is a Russian asset and Assad apologist. pic.twitter.com/0pzpA4nvRo

Friday afternoon after Plouffe’s podcast was published, Gabbard went off on Clinton in a series of tweets:

Great! Thank you @HillaryClinton. You, the queen of warmongers, embodiment of corruption, and personification of the rot that has sickened the Democratic Party for so long, have finally come out from behind the curtain. From the day I announced my candidacy, there has been a …

… powerful allies in the corporate media and war machine, afraid of the threat I pose.

It’s now clear that this primary is between you and me. Don’t cowardly hide behind your proxies. Join the race directly.

Clinton spokesman Nick Merrill responded to the news of how Gabbard reacted about like you’d expect he would:

Update from @merica: when asked if the former secretary of state was referring to Gabbard, Clinton spox Nick Merrill said, “If the nesting doll fits.”

“This is not some outlandish claim,” Merrill added. “This is reality.”

Assad day for your candidacy. https://t.co/JsQHnY6Ygo

Wow, if that’s not the pot calling the kettle black, I don’t know what is.

By the way, yes, that’s the same Nick Merrill who author/commentator Ronan Farrow alleges pressured him over his reporting about serial sexual predator Harvey Weinstein, who was a longtime friend of the Clintons.

As of this writing, the Russia-obsessed Clinton hasn’t responded to Gabbard’s challenge directly on social media and probably won’t. Because when it comes to using “divisive language filled with vitriol and conspiracy theories”, Clinton knows she can go on any national news outlet she wants to and make such outlandish claims without a shred of evidence, with little to no pushback from her interviewers, and with no opposing viewpoint from the person or people she’s attacking.

WASHINGTON, D.C.—According to sources at a DC-area Costco, failed presidential candidate Hillary Clinton was asked to leave Costco again after repeatedly accusing a lady handing out food samples of being a Russian asset.

It wasn’t clear how Clinton had ended up in the Costco, as she usually has her servants’ servants go to the market for her. Some suggested she wanted to disguise herself and go be among her subjects to see how the other 99% lives.

Whatever the case, the sample lady had apparently offered the failed presidential candidate a small paper cup of orange juice and told her the packs were on sale for $9.49 when the incident occurred.

“Orange… orange like Trump!” Clinton screamed suddenly, frightening the poor food demonstration worker. “You’re in league with him, aren’t you!?” The failed presidential candidate lunged across the cart and attempted to pull off her face mask, certain the lady was actually Vladimir Putin in a skin suit.

Given the number that Rep. Gabbard has done on Harris and Hillary, maybe we should give her a good, Native American title: Monster Slayer. (http://www.hanksville.org/voyage/navajo/MonsterSlayer.html)

Over at Breitbart Hillary is claiming that the DNC did not have any money, that is why she lost. Well according to Bloomberg,

She had like 1.6 B to work with and spent way more than Trump. I guess they just did not have enough to buy an election this time.

Tulsi needs to give Hillary a reset button.

Some sort of poison pill should do the trick.

That lady called Shrillary Shrooooo
Was looking for something to dooooo.
She blames me for her loss,
Plus you and yours, Boss,
And next, animals in the zoooo.

Being ideologically light years away from any of the Dems, I probably won’t vote for Gabbard. But I salute her not only for having served in our military, but also for telling it like it is about HRC.