REPORT: Schiff Knew of Whistle-Blower Accusations Before Complaint Was Filed

REPORT: Schiff Knew of Whistle-Blower Accusations Before Complaint Was Filed

Schiff denies he met with the so-called “whistle-blower” before a complaint was filed. 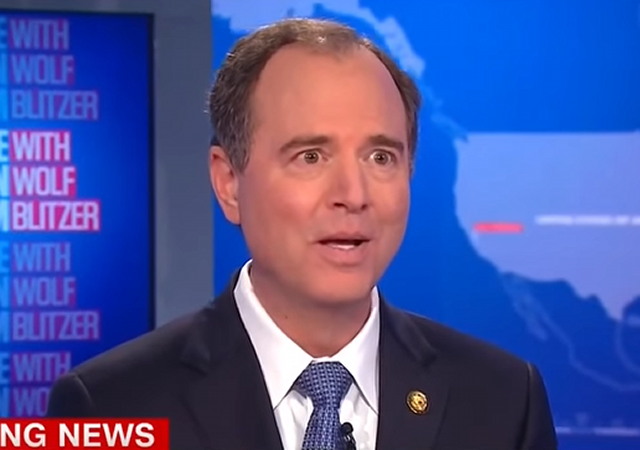 Wednesday, the New York Times reported that Rep. Adam Schiff, the House Intel Committee Chairman who beclowned himself repeatedly in the Trump/Russia conspiracy mongering, had knowledge of the whistle-blower’s concerns about Trump’s conversation with the Ukrainian president before an official complaint was filed.

The Democratic head of the House Intelligence Committee, Representative Adam B. Schiff of California, learned about the outlines of a C.I.A. officer’s concerns that President Trump had abused his power days before the officer filed a whistle-blower complaint, according to a spokesman and current and former American officials.

The early account by the future whistle-blower shows how determined he was to make known his allegations that Mr. Trump asked Ukraine’s government to interfere on his behalf in the 2020 election. It also explains how Mr. Schiff knew to press for the complaint when the Trump administration initially blocked lawmakers from seeing it.

The C.I.A. officer approached a House Intelligence Committee aide with his concerns about Mr. Trump only after he had had a colleague first convey them to the C.I.A.’s top lawyer. Concerned about how that initial avenue for airing his allegations through the C.I.A. was unfolding, the officer then approached the House aide. In both cases, the original accusation was vague.

The House staff member, following the committee’s procedures, suggested the officer find a lawyer to advise him and meet with an inspector general, with whom he could file a whistle-blower complaint. The aide shared some of what the officer conveyed to Mr. Schiff. The aide did not share the whistle-blower’s identity with Mr. Schiff, an official said.

Schiff denies he met with the so-called “whistle-blower” before a complaint was filed. The NYT report seems to back-up Schiff’s claim. Having knowledge of an incident and meeting with the individual bringing a complaint are different. I’m sure we’ll learn more in the coming days.

That said, advance knowledge gave Schiff a leg up in planning the dog and pony impeachment show that has become our national shame du jour.

A flashback to September 24, when I reported that @RepAdamSchiff somehow knew to open hearings into Giuliani-Ukraine on 9/9, the same day he learned about an IC whistle blower complaint but supposedly wasn't told its substance. Now we know he did know.https://t.co/SSy4hhVOAz https://t.co/FJifKK4ZHR

Adam Schiff's account to Congress was a total fabrication. pic.twitter.com/NPKNAOV8B1

We’ll see if this holds up:

So we are supposed to believe Schiff now? Why?

He lost any confidence in a thinking person years ago, while the impeachment addled leftist might still think he’s honest, the rest of the world says no.

“I can unequivocally state that neither any member of the legal team nor the whistleblower has ever met or spoken with Congressman Schiff,” @MarkSZaidEsq, one of the attorneys representing the whistleblower, tells me.

And yet this statement does not preclude any other liaisons, including other attorneys, serving as an intermediary between these two parties. Strong-sounding statement that does not hold up to much scrutiny.

by “knew of” what they really mean is “collaborated with”.