The University of Victoria dumps Dr. Susan Crockford, who discovered that polar bear populations thriving beyond the “co-existence threshold.” 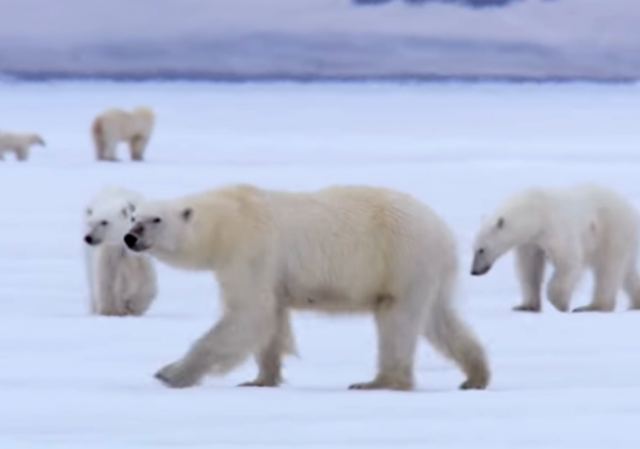 Legal Insurrection readers will recall I covered a book entitled “The Polar Bear Catastrophe that Never Happened” by Dr. Susan Crockford. The University of Victoria professor analyzes the latest data and reviews the questionable values used in official estimates, concluding that polar bears are actually thriving.

She has been fired from her position at the university.

After 15 years as an adjunct assistant professor, Ms. Crockford said the University of Victoria rejected without explanation in May her renewal application, despite her high profile as a speaker and author stemming from her widely cited research on polar bears and dog domestication.

Ms. Crockford accused officials at the Canadian university of bowing to “outside pressure,” the result of her research showing that polar bear populations are stable and even thriving, not plummeting as a result of shrinking Arctic sea ice, defying claims of the climate change movement.

Her dismissal, which she announced Wednesday in a post on her Polar Bear Science blog, has spurred alarm over the implications for academic freedom and the rise of the “cancel culture” for professors and scientists who challenge climate catastrophe predictions.

“When push came to shove, UVic threw me under the bus rather than stand up for my academic freedom,” said Ms. Crockford, who earned a Ph.D. in interdisciplinary studies, specifically biology and anthropology, in 2004.

But polar bears have also been fired from their position as the iconic climate change symbol. Via conservative pundit Don Surber, the British publication The Guardian’s picture editor Fiona Shields explains they will use fewer polar bears and more people to illustrate climate alarmism articles.

…We know, from years of experience, that people love polar bears and pandas, so it is easy to see how these appealing creatures have become the emblems for the topics of endangered species and what we previously termed as global warming. Often, when signalling environmental stories to our readers, selecting an image of a polar bear on melting ice has been the obvious – though not necessarily appropriate – choice. These images tell a certain story about the climate crisis but can seem remote and abstract – a problem that is not a human one, nor one that is particularly urgent.

So it made sense when we heard that research conducted by the team at Climate Visuals has shown that people respond to human pictures and stories. Images that show emotion and pictures of real situations make the story relevant to the individual.

However, the real reason may be threefold:

1) The polar bear population is booming.

2) People can be staged.

3) Polar bears are changing the safety environment of some communities, exceeding the “co-existence threshold.”

There are too many polar bears in parts of Nunavut and climate change hasn’t yet affected any of them, says a draft management plan from the territorial government that contradicts much of conventional scientific thinking.

The proposed plan — which is to go to public hearings in Iqaluit on Tuesday — says that growing bear numbers are increasingly jeopardizing public safety and it’s time Inuit knowledge drove management policy.

“Inuit believe there are now so many bears that public safety has become a major concern,” says the document, the result of four years of study and public consultation.

“Public safety concerns, combined with the effects of polar bears on other species, suggest that in many Nunavut communities, the polar bear may have exceeded the co-existence threshold.”

I thought the left was the party of science. Just more proof science is the last thing they care about.

There is no”co-existence threshold”… polar bears are alpha predators … more bears mean more contact with humans… a food source presently underutilized by the bears. Polars will hunt humans… which means humans will have to reduce the polar population which will really tick off the clinate change groups. More bears leaves only one question… 338 Win Mag or 375 H&H?

The .375 Remington Mag is very close to the H&H and cheaper to shoot, and the 8MM Mag is right in there too.

Definitely the .338 WinMag for most of Alaska. Except for Black Bear, when I hunt Alaska I’m hunting something other than bear. And Alaska law says whatever you kill is not your property, so you can’t kill a bear to protect the carcass.

But the bears don’t read the hunting laws so sometimes bears decide to go through you to steal the carcass (this is true in any state that has griz, where the rifle shot sounds like a dinner bell to any bear that hears it).

If the .338 isn’t enough I skip the .375 and go straight to .416 Rigby (CZ 550 Safari Magnum). If you don’t reload and use conventional lead core bullets even the steel jacketed 300 grain .375 bullets have a tendency to deform on impact (especially with bone) and go off course. It’s a heavy bullet but it’s slender for its caliber. They have a higher sectional density than the .338 250 grain bullet (.305 vs. .281) and in theory should penetrate better but the difference in penetrative power isn’t really detectable. But while you may hit the animal on the outside right where you aimed if it goes off course it won’t make it to the vital organs you need to hit to put the animal down.

It’s a real killer when it works right, but in Africa it’s considered too light to qualify as a stopping rifle. Stopping rifles begin at .40 caliber and 400 grains, hence my preference to go straight to the .416 Rigby. It’s such a stout bullet that you can use a lead core steel jacketed bullet with confidence that it won’t deform under any imaginable circumstance. If I wasn’t hunting but was solely concerned about stopping a large bear (which is really the main thing my friends who are BLM/other government agency surveyors are worried about as Uncle Sugar supplies them with food) I’d have my .416 Rigby with me.

But I roll my own since commercial .416 Rigby is something like $200 per box of 20 and for about 1.5 times that I’ve laid in enough Barnes hunting bullets, Hornady conventional bullets, and Norma brass to last two lifetimes for hunting and practice.

I also don’t dispute the 8mm Remington or .375 Remington are equal to the .375 WM or .375 H&H as killers but I tend to stick to the old classics because if you’ve ever been separated from the piece of luggage that has your ammo I like to have something chambered for a round I have a prayer of sourcing locally. I’ve never heard of anyone being able to find 8mm Remington ammo in Africa.

This is as great as the article I just read explaining why Darwin’s theory of evolution is being challenged. Time to shake up the whole eco-movement! Read the attack on Darwin below. It’s a thinking person’s dream.
https://www.dcclothesline.com/2019/08/26/yale-professor-darwinian-theory-of-evolution-cannot-explain-the-origin-of-species/

He’s peddling the same worn-out Discovery Institute talking points that have been debunked over and over and over again for decades. Also it’s not clear to me how a professor of computer science is any particular authority on molecular genetics.

That brings to mind a certain individual who flunked out of Harvard’s Divinity School — but went on to start a multi-billion dollar religion. Some fellow named Al Gore.

” . . . research conducted by the team at Climate Visuals has shown that people respond to human pictures and stories.”

This is SPECIESISM! Like Racism but with Species! This elevates people over all other animal life.
This needs to be condemned. People should respond to all forms of life, from the snail darter to ferocious polar bears CEOs . . . er, that last one is right out under Warren

maybe for you, sahib–if ever again hunt any four-legged predators that can wax me, it’s going to be: a rigby or a gibbs ?

Holy guacamole! The Rigby guns are beautiful but I’d have to sell everything and sleep in a tent. With the Rigby. Hmmm.