“Planned Parenthood has used a shell company to construct the facility, leaving no public trace that the former medical office would become one of the largest abortion clinics in the country.” 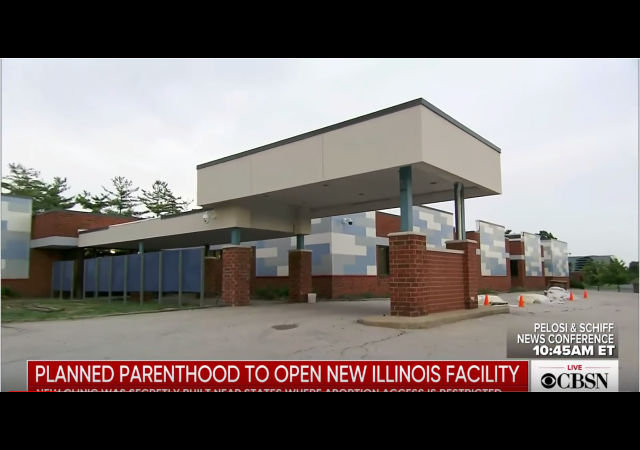 Missouri has one clinic left that provides abortions, which has left the abortion fanatics up in arms.

No need to fear! Planned Parenthood is here! The infanticide giant announced the opening of a “mega-facility” just 13 miles away from Missouri’s last abortion clinic in St. Louis.

Nothing creepy about this story at all! You know, besides the murder of unborn human beings (emphasis mine):

Since August 2018, Planned Parenthood has used a shell company to construct the facility, leaving no public trace that the former medical office would become one of the largest abortion clinics in the country. CBS News first visited the site in August, while it was still being built.

Colleen McNicholas, the chief medical officer of Planned Parenthood of the St. Louis Region and Southwest Missouri, said the facility was built in secret to avoid protestors and delays. Other Planned Parenthood projects had run into problems once the public realized the construction was for an abortion provider. In one instance, a communications company had refused to install telephone and data lines; in another, a cabinet maker never delivered an order, McNicholas said. In Birmingham, Alabama, protestors targeted Planned Parenthood’s suppliers, flooding their social media accounts with fake negative reviews.

The way McNichols, and the left overall, twists or removes words when talking about abortion disturbs me.

For instance, McNichols told CBS that Planned Parenthood was “really intentional and thoughtful about making sure that” they completed this project as fast as they could since they “saw the writing on the wall – patients need better access.”

Translation: We saw that Missouri is doing everything it can to preserve everyone’s right to life starting in the womb so we jumped in to prevent that right.

Since 2018, a lone Planned Parenthood has been the state’s only legal abortion clinic, pushing some women to spend hours crossing the state to obtain the procedure. In May, that clinic was nearly forced to stop providing abortions when the state’s health department refused to renew its license, a story first reported by CBS News. For months, a string of preliminary injunctions has allowed the clinic to continue operating.

Besides having just one clinic in their state, Missouri women face some of the country’s most restrictive laws when seeking an abortion. Prior to receiving an abortion, patients are required to undergo state-mandated counseling where they receive anti-abortion literature. After that, they’re forced to wait at least 72 hours before they can have their abortion.

God forbid a woman puts some thought into her choice that not only ends the life of an unborn human being but will also affect the woman for the rest of her life.

Illinois is not only the most corrupt state in the union but one that loves infanticide. Lawmakers passed the “Reproductive Health Act” earlier this year, which made abortion “a fundamental right.”

The state’s openness to abortion has led to women traveling to the state:

Since 2017, the number of women crossing the border into Illinois for an abortion has doubled, according to data compiled by the Associated Press.

Providers near the border have seen those increases firsthand. At The Hope Clinic, a Granite City, Illinois-based abortion provider about 10-miles away from St. Louis, about 55% of patients seeking abortions are from Missouri, according to the clinic’s deputy director Alison Dreith. On a recent day at Planned Parenthood’s existing facility in Belleville, Illinois, just two miles from Planned Parenthood’s new facility, every patient was from Missouri, something that Jessica Herbert, a provider at the clinic, said is typical.

We Navy types use to laugh at our Green Beret friend. Who used to expound on the IR signature of our Navy whites.

We were like, “If we are ever stupid enough to run around in a jungle wearing the white uniform, please shoot us.”

We had more than one Green Beret or Ranger type as friends. But only one seemed to not get the idea we are not walking into a jungle wearing our whites.

Here’s the thing about camo. When you fall into the water they can’t find you. And you want to be found.

I know this is going to come across as big, empty talk.

Gordon Lightfoot – The Wreck Of The Edmund Fitzgerald ( Lyrics )

I’ve been terrified of the ocean after I witnessed the Pacific crush in the bow of the USS Carl Vinson. That is some thick steel. The Pacific crushed it. Now I live in North Texas. About as far as I can get away from the ocean.

But if it was going to take me to push back out to sea to defend the country I would do it.

I can’t find a news story about how the Pacific hurt the Carl Vinson. And I how I got to spend two memorable weeks in the Philippines while she was being repaired. So feel free to not believe me.

That deck is 80 feet above the waterline.

Down arrow by reply…..AGAIN!!! Sorry…..Typhoon Cobra during late WWII…severe damage to carrier and lost two destroyers.

I gave an up arrow to balance things out for you.