The ceasefire will last for 120 hours. 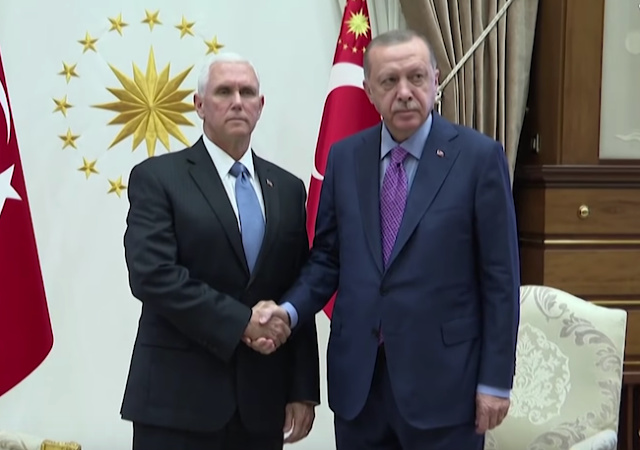 The two men, along with Secretary of State Mike Pompeo, met for over five hours to discuss the situation.

Vice President Mike Pence said Thursday that the United States and Turkey had agreed on a Turkish cease-fire in Syria, days after the country’s forces launched an offensive in northern Syria.

“Let me say this also includes an agreement by Turkey to engage in no military action against the community of Kobani,” Pence said. “And, in addition, the United States and Turkey have both mutually committed to a peaceful resolution and future for the safe zone, working on an international basis to ensure that peace and security defines this border region with Syria.”

The ceasefire will last for 120 hours. This will allow American and Kurdish forces to leave “from a designated safe zone at the country’s border.”

In return, Turkey will not face new sanctions from the U.S. Once the ceasefire becomes permanent, America will “revoke all economic punishments.”

Great news out of Turkey. News Conference shortly with @VP and @SecPompeo. Thank you to @RTErdogan. Millions of lives will be saved!

Trump made the decision to pull out our troops from Syria ten days ago, which allowed Turkey to begin an offensive. This left the Kurds unprotected.

I blogged on that day that Erdogan does not keep his hatred of Kurds a secret from anyone. He considers the People’s Protection Units (YPG), the Syrian Kurds helping to defeat ISIS, “as an extension of the Kurdistan Workers’ Party, or PKK, which has waged an insurgency against Turkey for 35 years.”

YPG changed its name to the Syrian Democratic Forces (SDF) back in 2017. Special Operations Command Head U.S. Army General Raymond Thomas encouraged the group to do this due to Turkish concerns that YPG has a connection to PKK.

SDF swore it would do anything to protect itself if Turkey attacks the group.

..and one could search every grain of sand with a microscope and not find a single US Interest on any of them.

Yes please, it’s way past time. GWB was right to go in and whip ass after 9/11. But we’ve stayed about 17 years too long.

This will allow American and Kurdish forces to leave
And why should the Kurds agree to this? That area is part of their home in Syria.

I don’t think that’s enough reason for us to stay and play “Tripwrire, 2d edition”. But let’s be honest about what we’re doing.

“And why should the Kurds agree to this?”

They don’t get to agree, they have an opportunity to leave or stay and be annihilated.

“That area is part of their home in Syria.”
“Home” is something you can defend, otherwise it belongs to someone else.

….I have just been notified that some European Nations are now willing, for the first time, to take the ISIS Fighters that came from their nations. This is good news, but should have been done after WE captured them. Anyway, big progress being made!!!!