Sheriff Joseph Lombardo believes the change in cooperation “will not hinder” their fight against “violent crime.” 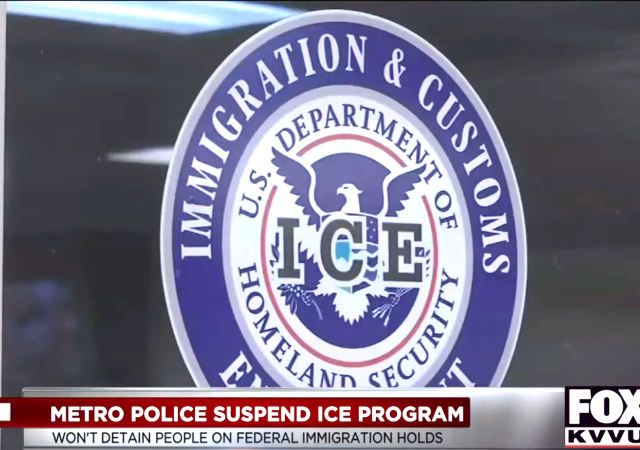 LVMPD justified its decision based on the Central District for California’s decision in September.

The court decided “ICE is enjoined from issuing detainers to state and local law enforcement agencies in states where there is no explicit state statute authorizing civil immigration arrests on detainers.”

Nevada is one of those states.

The program is called 287-G. In June, ICE requested to extend the program to remove those who committed violent crimes:

The 287-G program uses a set criteria to determine if detainees will be sent to an ICE detention center.

“They are then screened through this criteria and if they fit that criteria they are then flagged by officers to be sent over to ICE agency for them to then determine through a federal hearing, and federal judge, what is going to happen to them,” said Lt. Yancey Taylor of the Clark County Detention Center.

LVMPD admitted the decision will likely face appeals in the Ninth Circuit Court of Appeals.

Officers will not wait until then, though. They will “cease honoring ICE detainers. The department “will continue to work with ICE at the Clark County Detention Center in removing persons without legal status who have committed violent crimes.”

Since LMVPD will continue working on the latter with ICE, Sheriff Joseph Lombardo believes the change in cooperation “will not hinder” their fight against “violent crime.”

ICE has the ability to look at rosters in jails due to databases. If the program finds a person “unauthorized to be in the U.S., it issues a detainer asking the jailers to hold the person until he or she can be taken into immigration custody.”

The 287-G program allows ICE “to ask officers to hold an inmate for longer than their sentence or hold time to give an ICE agent time to arrive and detain an undocumented person.”

Activists have claimed the officers can make too many mistakes due to errors in the databases. U.S. District Judge André Birotte Jr. said data showed “that nearly 800 detainers out of almost 13,000 were explicitly lifted” because the person was a citizen “or otherwise not subject to removal.”

Time to get the Feds to go after LVMP