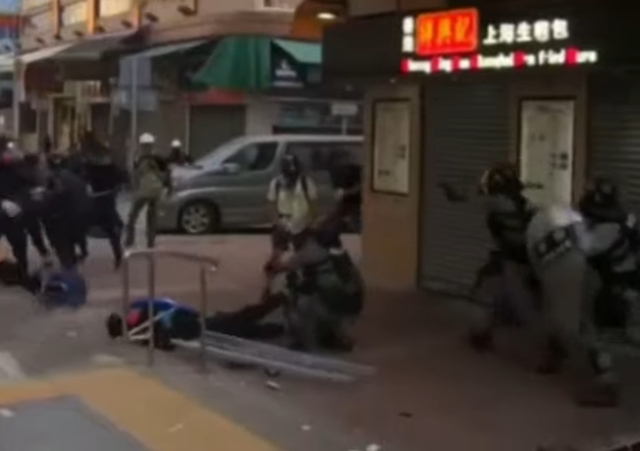 A teen protester was shot and there were several live rounds fired during a series of Hong Kong Demonstrations on October 1, which marred National Day commemorating the 70th anniversary of the founding of the People’s Republic of China.

A Hong Kong police officer on Tuesday shot a teenage demonstrator, the first time in months of protests that a live round was fired at a protester. The shooting capped an evening of violent protests, escalating the territory’s political crisis on the same day that the central government staged a huge military parade in Beijing to celebrate 70 years of Communist control.

The protesters in Hong Kong hoped to upstage Beijing’s celebrations by holding their own unauthorized marches. Violence quickly broke out, as demonstrators in districts across the city engaged in some of the bloodiest and most sustained clashes since protesters began taking to the streets in early June.

Considering the Hong Kong residents referred to one event as a “Grief March”, there is a sense that the city was not quite down with the celebration.

An 18-year-old protester was hit in the chest by a live bullet fired from close range by a police officer in Tsuen Wan, while exchanges of tear gas and petrol bombs took place in at least 13 parts of the city .Protesters on a massive banned “national grief” march from Victoria Park in Causeway Bay to Central appeared intent on continuing their journey toward Beijing’s liaison office in Sai Ying Pun, but clashes broke out soon after.

The celebrations at the Chinese capital were quite different.

Meanwhile, officials in the Chinese capital were rejoicing over seven decades of Communist (i.e., totalitarian) control. Beijing’s leaders, including President Xi Jinping, sat overlooking Tiananmen Square — the site of a bloody crackdown 30 years ago — watching a 15,000-troop military parade show off a new ballistic missile. That was followed by a civilian parade, fireworks and musical and cultural performances.

“We must remain committed to the strategy of peaceful reunification and ‘One Country, Two Systems,’ ” said Xi, regarding Hong Kong. “No force can shake the status of this great nation.”

That is, don’t mess with us, protesters.

Meanwhile, Hong Kong businesses are cleaning up the debris and bracing for even more protests.

Many stores and business had closed on Tuesday after demonstrators vowed to seize the opportunity on China’s National Day to propel their calls for greater democracy onto the international stage.

The protests have plunged the former British colony into its biggest political crisis in decades and pose the gravest popular challenge to President Xi Jinping since he came to power.

Actually, if you watch the video, the officer (and several of his compatriots) were responding to another officer on the ground being attacked by several protesters. Just prior to being shot, the protester can be seen swinging a bar of some kind at the officer.

Think what you may about the validity or the protests but if you’re going to try to beat an armed LEO, expect to get shot.

Of course, the NYT tries to impugn the officers as much as they can … https://www.youtube.com/watch?v=HRdXjsGlh2s

Yeah, pretty much. Of course I’m on the side of the HK protesters in general, but this individual officer was simply defending himself and his buddy. Big picture and close-up can contradict.

Ho about communist thug intent upon keeping you in slavery. That’s a truthful description.

Admiration to the young people of Hong Kong. They are willing to fight for freedom in spite of overwhelming odds. They are more American than at least half of the citizens of the USA.

I was holding my 2 cents for the past months, hoping the writers/readers would see the truths when time passes by. Now, I would like to say a word as someone who come from HK from a different perspective. I left HK decades before 1997 simply because I don’t want to live in Communist country. I love US for a lot of reasons. I considered myself a conservative. Recently, however, I have rethink about what I think about “conservatives” regarding the Hong Kong RIOT. Why I used the word riot instead of protest as others? Because it is a riot. Most of the US people can only see what have been heavily edited news clips conveying twisted facts. I thought, as conservatives, we suffered from biased/fake news, so we should be very careful when we watch those clips, and we should dig deeper to find out the hidden truths. I was disappointed when most of people here are siding with the rioters instead of those upholding the law. I don’t know why people can see the Antifa is evil when it happened in Portland, OR, but willfully blind their eyes when it happen in Hong Kong. Because the distance? Language barrier? The teenager that mentioned in the article is a violent gang member. His action and goal were pure evil. He used a metal rod to hit the police arm that holding the revolver, in order to make him drop the gun so he or his companion can take it, in addition to hurt the officer. I think, because of the training or the muscle reflection, the officer didn’t wan to drop the gun so he attempted to grab the gun harder and, unfortunately, squeezed the trigger and fired the shot. This is the first bullet that penetrated a live body during this 3+ months event. I heard the French police killed many more people not too long ago. If it is because the place is a city of the evil ChiCom then everything should be treated upside down? Enemy’s enemy is not your friend. The links below show clips tells more about the incident than a picture, I wish I can translate all the words in the clips, but watching it without understand what the words being said may help you see the truth by the actions.

As usual, only when criminal activities are going on, the police will show up, to stop and arrest the criminals. Most of the people here only watch those edited clips that portrait the HK police cursing around town and randomly pick on some innocent citizen to relief their anger, or execute a secret mission/order directly from the chairman of the ChiCom! If peaceful protest means burning down anything on the street, throwing Molotov cocktail to police, beating up others with opposite opinion, vandalize any place they walk by, breaking glass wall they see, spray paint anywhere they like, using high power laser pointer in attempt to literally blind people, etc. then we should ask the Portland mayor keep letting Antifa to take control of the downtown Portland. I would like to hear the logical reasoning to tell me why the same violence here on this continent being rejected by conservatives but being cheered on by icons like Cruz when it is oversea. He even submitted a bill to show his support of the violent rioters. As a US Senator, he should have access to all facts, not just from ABCCNNNBCCBS. It is either ignorant or evil intended. This triggered me to rethink the meaning of “conservative values”. The true victims of the violent destruction happening in HK are the common people who they live their life one day at a time.

Deuteronomy 16:19 Do not pervert justice or show partiality.

If you think the HK “Christian” were leading the charge in this riot, that must mean it is a rightful thing? Sadly to say, after I did the research, the churches in HK are generally converted to the teaching of the social justice. They said no word when the high court in HK declared same sex marriage should be legal. The social workers take advantage of the ruined spirits of young people that needed help. They lead them to participate in the riots, and as cued, provide cover to those being caught like a pimp. The high school teachers brainwashed the naive teenagers with socialism and hatred. The professors in universities are teaching the students to break the law in order to achieve the justice they are seeking. They all know how to play the teenagers like a puppet master. Are these reflecting the conservative values? Help me to understand why, as a conservative in US, has to cheer on those rioters that are attempting to kill the police and rob their guns to do more harm?

By the way, one funny observation. Most of the people wearing yellow jackets with the word “PRESS” on it are supposed to be news reporters. But they always line up between the police and the rioters, and always facing the police with their cameras. Seems like they don’t have any interest in what the rioters would do, or simply they consider themselves are of the rioters. Those “reporters” always rushed in to stand in the way of the police, pretending taking pictures, after the rioters attacked the police or done some damages, in order to let them flee. What a teamwork and doing better job than their counterparts in the US. 🙂

On the side, I want to know what happen to Venezuela nowadays after we were so cheered on their “revolution” and the threat of sending troops.

They reported a week or so ago that the day’s protest was because the people in that area didn’t like old Chinese (mainland I assume) women doing exercises in their park.

Really? They couldn’t even come up with a better reason than that?

BTW I’m a conservative, we’re not all clueless.

You are a damn fool if you believe anything that paid communist joker wrote.

You are a communist intent upon further enslaving the people of Hong Kong.

You will tell any lie in service to the communist masters. You are likely paid to do it.

The Chinese communists murdered 40-50 million. Got that? 40 to 50 million people murdered.

Think this was the old regime? Get real, the communists in China murdered 10,000 or more in the Tiananmen Square massacre.

Take your message of slavery and shove it.