GOP Rep. Francis Rooney, Who Is Open to Impeachment, Announces Retirement From Congress

GOP Rep. Francis Rooney, Who Is Open to Impeachment, Announces Retirement From Congress

“I thought the idea was you came and did your public service and left, you accomplish what you want to accomplish and you left” 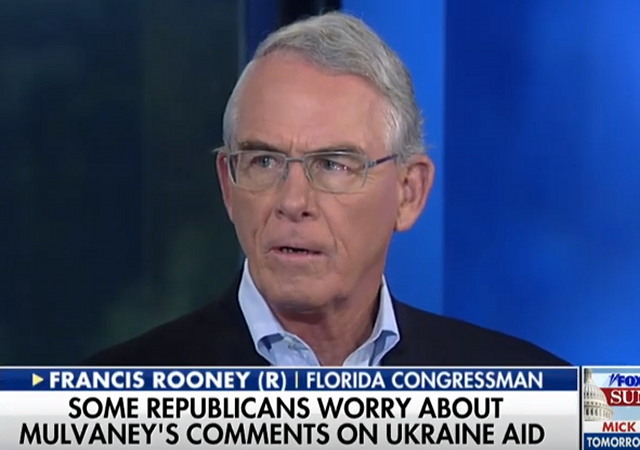 Republican Congressman Francis Rooney represents Florida’s 19th district. He recently said that he may be able to support Trump’s impeachment. Now he has announced that he is retiring.

This means that if the House actually pulls the trigger on impeachment, Rooney could support it without facing any consequences for doing so.

His decision not to run for reelection may indicate a sense of uncertainty about getting reelected given his pro-impeachment stance.

GOP congressman who was open to impeachment calls it quits

“I thought the idea was you came and did your public service and left, you accomplish what you want to accomplish and you left,” Rooney said on Fox News. “And that’s what I want to be an example to do. And I’m also tired of the intense partisanship that stops us from solving the big questions that America needs solved.”

The two-term congressman confirmed his plans shortly afterward in an interview with POLITICO.

The news came one day after Rooney, a former construction company owner and major GOP donor, told CNN he couldn’t dismiss the possibility that the president committed an impeachable offense in his dealings with Ukrainian officials. “I don’t think you can rule anything out unless you know all the facts,” he said…

The Florida Republican said Friday he was “shocked” by Mick Mulvaney’s admission of a quid pro quo, saying it would be difficult for the White House to walk back the comments and that it “very well could be” a turning point in the Ukraine saga.

“He basically said it’s a quid pro quo, which is not a good thing,” Rooney said. “The only thing I can assume is he meant what he had to say. … It’s not an etch-a-sketch.”

This is likely just an excuse for Rooney, but unfortunately, his ill-informed comment will be held up by Democrats and the media as ‘proof’ of wrongdoing.

You’ll be shocked to learn that Rooney, a Florida Republican, is a big buddy of Jeb Bush and was a major donor to his 2016 presidential campaign.

The Jewish Insider reported in 2017:

It is not a popular time to be a close ally of the Bush family in Washington. Along with a photo of his grandchildren, hanging on Representative Francis Rooney’s (R-FL) office wall is a picture of the Congressman smiling with former President George W. Bush. The 43rd Commander in Chief appointed Rooney as U.S. Ambassador to the Vatican where he served from 2005-2008.

Rooney Holdings Inc, owned by the former US Envoy, donated more than $2 million to Governor Jeb Bush’s campaign for President.

Rooney talked about his decision to retire on FOX News last night. Watch:

Maybe it’s time for a second wave Tea Party to replace Republicans like Rooney in Congress.

Not surprising. As I predicted, Pelosi would never have agreed to start impeachment in the House if she did not have at least one GOPe Representative willing to vote in favor of impeachment. Looks like Rooney may be her Huckleberry.

In the Senate Mitt Romneycare is a lock to vote for removal, with Lee and Sasse likely “Yes” votes as well. This is not enough for removal, but it is enough to keep the Senate trial going for weeks (or months, if necessary) while preventing Senate Republicans from bringing up anything damaging to Democrats. Since removal is unlikely the Democrat/GOPe goal is to create Trump Fatigue, whereby (they hope) enough independents will be turned off enough to not vote at all.

“He basically said it’s a quid pro quo, which is not a good thing,” Rooney said.

Incorrect. Mulvaney clarified his statement. There is no quid pro quo. I couldn’t even see in his original press conference where he might have said it, unless some reporter had some super-secret-keyword sense.

Why do I have the feeling this guy worked out a little deal for his support of impeachment? You know, a sort of quid pro quo.

Somebody needs to point out the obvious, so. A reading from the book of obvious.

We can distill what Mulvaney said down from three Latin words, quid pro quo, to one English word. Diplomacy.

Shocka! Countries don’t typically do things for other countries out of a sense of charity. If one country does a favor for another country. And the favor Trump asked Zelensky for was to investigate Ukrainian interference in the 2016 election as part of their overall investigation into past corruption; five minutes before finding out about Trump’s phone conversation with the Ukrainian president investigating foreign interference in the 2016 election was the Democrats’ highest priority before it became an impeachable offense.

What this idiot Rooney, and all of the Democratic operatives inside and outside the MSM, are pretending not to understand is that there is nothing illegal or improper about a quid pro quo per se. There is nothing illegal or improper about delaying the transfer of aid to another country when the aid is delayed for reasons that are unquestionably in our national interest. Such as for the

I didn’t complete this thought although where I was going should have been obvious.

“If one country does a favor for another country…the first country needs to get something beneficial out of the deal or they won’t do the favor.”

Quid pro quo – this for that; something in exchange for something. There is nothing illegal or improper about it. When someone goes to a hot rod/car parts swap meet looking for a particular item they’re not going to get what they want if they don’t have something of value to exchange for the part. In the absence of something to exchange (or cash to buy it) the fact that I got the part without a quid pro quo means I stole it.

… (cont.) reasons Mulvaney laid out regarding the delay of aid to Ukraine. 1) to influence our allies to share the burden and 2) ensure Ukraine is serious about fighting the corruption that under Obama meant billions of U.S. taxpayer guaranteed loans intended to stabilize the Ukrainian economy were diverted to the private use of corrupt oligarchs.

If the name Kolomoyski seems familiar, he is the corrupt oligarch who founded Burisma, Ukraine’s largest natural gas firm, and remains the controlling partner. He also hired Hunter Biden for a no-show job as a “ceremonial” member of Burisma’s board of directors. Hunter Biden could not speak Ukrainian, had no experience in the fossil fuels industry, had no knowledge of Ukrainian law or regulatory compliance issues (the job he was ostensibly hired to perform) and indeed no experience in legal consultancy whatsoever. Which no doubt explains why he never traveled to Ukraine once while on the Burisma board (hence no-show job). Kolomoski hired Hunter Biden for one reason and one reason only; to buy influence with his dad. Rather than look out for the U.S. taxpayer and tend to U.S. national interests which obviously include looking into the disappearance of $1.8B in U.S. guaranteed IMF bailout money, he instead threatened to harm Ukraine’s economy by withholding another $1 dollars in aid unless the Ukrainian government fire the prosecutor investigating the the theft. Kolommoski got his $80k/mo. money’s worth hiring Hunter.

Again, why use three Latin words for what VP Biden did, quid pro quo, when one English word better describes what Biden did. Extortion.

A quid pro quo is only improper when done for a corrupt purpose. The reasons Mulvaney laid out for withholding aid were entirely appropriate and indeed the Obama administration was derelict for failing to do the same, if not actually complicit given VP Biden’s ties to the Ukrainian corruption from which his son was handsomely profiting.

Even more basic, Mulvaney wasn’t even describing a quid pro quo since the Ukrainian government had no idea the aid was even being delayed until weeks after the phone call. And in fact had already decided to reopen the investigation into Burisma weeks or months before Trump made the phone call.

The faux outrage of the left over Trump’s entirely legitimate conduct of foreign policy is disgusting considering they are covered in the sewage of their own actual corruption.