“Can we please answer the question I asked you instead of trying to make Donald Trump feel better here that you’re not criticizing him?” 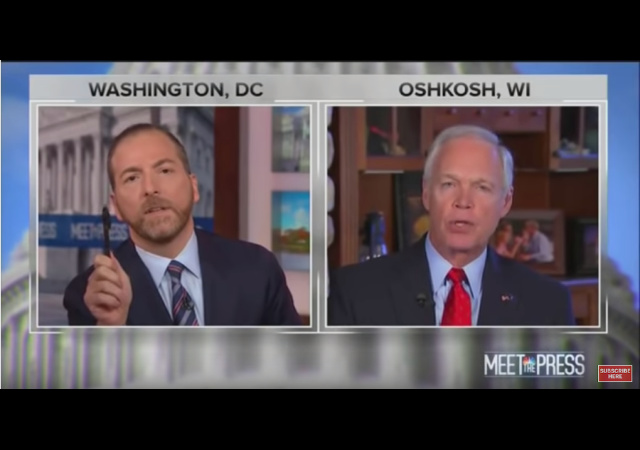 Johnson appeared on the show to discuss comments he made on Friday regarding President Donald Trump and Ukraine. Johnson took the interview in a different direction, which led Todd to blow his lid.

“Senator Johnson, please!” whined Todd. “Can we please answer the question I asked you instead of trying to make Donald Trump feel better here that you’re not criticizing him?”

Todd asked Johnson about a report from The Wall Street Journal. From The Daily Mail:

The Wisconsin Republican said in a report published Friday that he winced when the ambassador to the E.U. implied that Trump was withholding military aid to Ukraine and seeking that Ukraine look into matters related to U.S. elections.

‘At that suggestion, I winced,’ Johnson told the Wall Street Journal last week. ‘My reaction was: Oh, God. I don’t want to see those two things combined.’

‘Why did you wince and what did you mean by ‘those two things combined’?’ Todd asked in regards to the senator’s previous comment, which set Johnson off on a seemingly-unrelated rant.

Johnson read some of the text messages between the former lovers, insisting an investigation has to happen about due to the possibility “the CIA planted a false story that Russia was supporting the Trump campaign.”

After the back-and-forth, Johnson told Todd he did not want the story about Trump and Ukraine to be true. He also explained that Trump “vehemently, angrily denied it.”

It could be that Ukraine is a very touchy subject and the Dems have spies.

Trump has some theory about the DNC server that people are trying to figure out what it is, it is so unheard of.

The New York Times has published a few artidles about it.

Thed real problem for Biden is that he probably made the whole story up about acancelled announcement iand.or cancelled press conference in Kiev.

There’s no other source other than the Biden’s speech before the Council on Foreogn Relations on January 23, 2018 for this tale:

The key words are:

….I’m desperately concerned about the backsliding on the part of Kiev in terms of corruption. They made—I mean, I’ll give you one concrete example. I was—not I, but it just happened to be that was the assignment I got. I got all the good ones. And so I got Ukraine. And I remember going over, convincing our team, our leaders to—convincing that we should be providing for loan guarantees. And I went over, I guess, the 12th, 13th time to Kiev. And I was supposed to announce that there was another billion-dollar loan guarantee. And I had gotten a commitment from Poroshenko and from Yatsenyuk that they would take action against the state prosecutor. And they didn’t.

Biden has to avoid any questions that woud touch on that.

One thing that makes this story unlikely is that even after the prosecutor was fired the loan guarantees were not releaeed so that couldn’t have been the only thing holding it up.

My understanding of the chronology is:

4) Beginning of June 2016: The Ukrainian Parliament passes a package of anti-corruption legislation and the next day the $1 billion loan guarantee is made available, with the United States Ambassador to Ukraine formally signing them in Kyiv.

But doesn’t consider the possibility that Biden made the whole story up about a cancelled announcement.

The Washington Post does link to another earlier different version from 2016 of Biden’s story that doesn’t include the press conference. Bt even that may not be true, at least the way he tells it.