Boris Johnson: “We are coming out of the EU on October 31.” 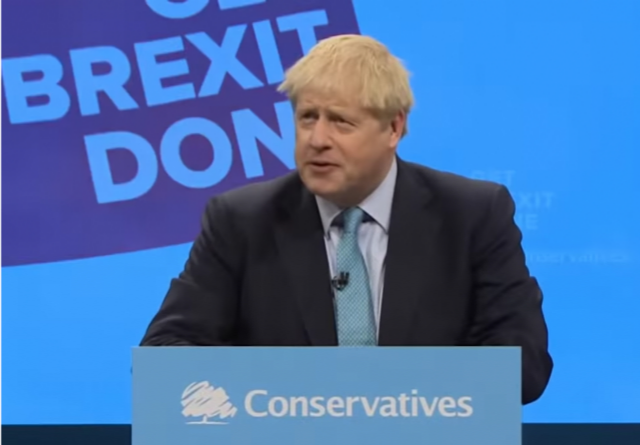 British Prime Minister Boris Johnson has laid out his final offer to the European Union ahead of the October 31 Brexit deadline. If Brussels fails to accept the proposal, the UK will leave the EU without a deal, Johnson warned. The UK will be “coming out of the EU on October 31,” he said.

The proposal will “honor the referendum,” Johnson told parliament on Thursday. He described his five-point offer as a set of “constructive and reasonable proposals, which provide a compromise for both sides.”

The final offer seeks to avoid checkpoints or other physical infrastructure at the border between the UK and the Republic of Ireland, the so-called Irish “backstop.” Once Brexit takes place, the border between Northern Ireland and Ireland will become an external EU border.

“We will under no circumstances have checks at or near the border in Northern Ireland. We will respect the peace process and the Good Friday agreement,” Johnson said.

British Prime Minister Boris Johnson made a final Brexit offer to the European Union on Wednesday, pitching a possible compromise for a last-minute exit deal that was cautiously welcomed by the EU though the two sides still remain far apart.

In what Johnson’s supporters cast as a moment of truth after more than three years of Brexit crisis, Johnson urged Brussels to compromise but warned that if it did not then Britain would leave the EU without a deal on Oct. 31.

Johnson went further than many expected on the most contentious issue – the border between British-ruled Northern Ireland and EU member Ireland – with a proposal for an all-island regulatory zone to cover all goods, replacing the so-called backstop arrangement he says he cannot accept.

Besides the concession though, Johnson proposed giving Northern Ireland institutions the ongoing power to abide by or exit the regulatory zone – a possible step too far for Ireland and the EU.

UK media reports indicated that Johnson may succeed where his predecessor Theresa May failed. According to Michael Gove, the British minister in charge of planning for a no-deal Brexit, there is a “pretty solid majority” in the Lower House for the plan just proposed by Johnson,” The London Times reported Thursday. “For his deal to pass through the Commons with a straight majority Boris Johnson will need the support of 320 MPs — a target that appears to be increasingly viable,” The Times concluded.

The deal tabled by former Prime Minister May was rejected thrice by the House of Commons. Pro-Brexit Conservative lawmakers, including Johnson, joined hands with Northern Ireland’s Democratic Unionist Party (DUP) to vote down her proposal.

Jeremy Corbyn today ordered his Labour MPs to frustrate Boris Johnson’s ‘reckless’ attempt to secure a Brexit deal and get the UK out of the EU.

The opposition leader laid out the command in the Commons amid claims by some backbenchers in Leave-voting areas that as many as 30 of his MPs would be prepared to support the Government’s plan to get Brexit done.

Meanwhile, Johnson is trying to cement his hold on the Conservatives. On Wednesday, he addressed the Conservative party conference under the “Let’s Get Brexit Done” banner, telling the delegates to get behind him ahead of the final push to take the country out of the EU.

“We can, we must and we will, even though things have not been made easier by the surrender bill,” Johnson said referring to the resolution passed by the Lower House calling for the postponement of Brexit if no deal is reached with the EU before October 31.

Johnson also hailed capitalism and ripped into his socialist opponents, a rear and refreshing feat for a European leader nowadays. The party delegates “cheered when he launched an unashamed defence of capitalism after tearing into the ‘fratricidal anti-Semitic Marxists’ of the Labour Party,” the Daily Telegraph commented.

To see his proposal through, Johnson will not only need the necessary votes in the parliament or the EU’s consent. He will also need Ireland to get on board. Those in Northern Ireland, who seek closer ties with the Republic of Ireland, will resist any concession on the issue of free movement across the border. The EU has been exploiting the dispute to sabotage the Brexit verdict. The threat of a no-deal could force the EU to accept the British offer. The success of Johnson’s initiative will largely depend on how the border issue, or ‘backstop,’ is resolved.

The f’ing EU loses case to the USA in the WTO, largest award ever at 7.5 billion.

He’ll be up there with Churchill if he sticks to his guns and succeeds.

The deal he is the one the E.U. handed to him for the rubber stamp.
It could be characterized as the “Articles of Surrender”.

How could it be anything else, since the EU sees that if he has no deal he is not allowed to leave on the 31st.

I’m sure the mighty German Air Force and the French Navy will put Britain in its place in short order.

Glad Barry notes Airbus business. Let ne add that the first shrub–Reagan’s worst mistake–sold out to the EU on Airbus. Someone needs to explore more fully this scandal.