Prime Minister Johnson: “It’s time for the country to come together, get Brexit done and go forward.” 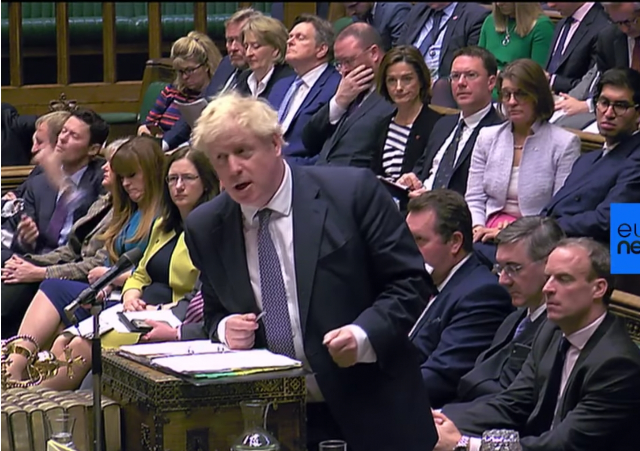 Britain is heading for a general election in December after lawmakers overwhelmingly voted for the proposal brought by Prime Minister Boris Johnson. The UK Lower House voted 438 to 20 in favor of the “Early Parliamentary General Election Bill,” paving the way for December 12 vote.

The move also means that Britain will not be leaving the European Union on the October 31 as planned. Earlier this week, Brussels extended the Brexit deadline until January 31.

Prime Minister Johnson wants to makes this election about taking the UK out the EU, something the current parliament failed to deliver more than three years after the Brexit referendum. “I think it’s time for the country to come together, get Brexit done and go forward,” Prime Minister Johnson said. “It’ll be a tough election and we are going to do the best we can,” he added.

The bill was passed after the country’s main opposition Labour party joined the ruling Conservatives in backing the call for an early election. In recent weeks, Prime Minister Johnson had unsuccessfully tried to convince the parliament to approve a snap election to break the Brexit impasse. Labour party chief  “Jeremy Corbyn caved in to pressure to accept an early election after Tory MPs said he had “run out of excuses” for opposing one,” UK newspaper Daily Telegraph disclosed.

The proposal is likely to pass through the Upper House in coming days, paving the way for parliament to be dissolved in early November, UK newspapers report.

BBC reported the parliament’s decision to go for a early election before Christmas:

The UK is set to go to the polls on 12 December after MPs backed Boris Johnson’s call for an election following months of Brexit deadlock.

By a margin of 438 votes to 20, the House of Commons approved legislation paving the way for the first December election since 1923.

The bill is still to be approved by the Lords but could become law by the end of the week.

If that happens, there will be a five-week campaign up to polling day.

Though Tuesday’s vote in the Lower House is a victory for Prime Minister Johnson, there is a lot at stake in this coming general election.

For the first time in post-war Britain, the opposition Labour party is fielding a candidate with links to Marxist and Far-Left groups. Jeremy Corbyn has a long history of associating himself with Arab and Islamist terrorist groups. In a 2009 speech, he famously described Islamic terror groups Hamas and Hezbollah as his “friends.” Last year, Daily Mail published photographs showing the Labour party chief laying wreath at the graves of Arab terrorists who murdered eleven Israeli team members at the 1972 Munich Olympics.

The Daily Telegraph explained the importance of the coming election:

It will be the most consequential election since Margaret Thatcher came to power in 1979, if not in the entire post-war era. The result will not only determine the direction of Brexit, or if Brexit happens at all, but also whether Britain is taken over by the most radically Left-wing Labour Party in its history.

Not surprisingly, the mainstream media is trilled at the prospect of Corbyn winning in the Downing Street. “Get Ready for Prime Minister Jeremy Corbyn,” the New York Times declared in 2017. CNN lauds him for being a leader who has “an unashamedly socialist plan to transform Britain.” Just like Chavez in Venezuela, Castro in Cuba, Pol Pot in Cambodia, and many other big and small tyrants and genocidal maniacs before him.

Most polls show the Johnson’s Conservatives ahead of the rival Labour party. Many polls also predict Nigel Farage’s Brexit party taking large chuck of Leave voters, or even emerging as the third largest party.

Following the news of snap election, Farage again urged Johnson to form an electoral alliance with the his party to avoid splitting the pro-Brexit vote. Johnson has not responded to similar overtures in the past, and apparently plans to go it alone in the general election. How risky that move is, only time will tell.

With today’s decision, the fate of Britain is once again in the hands of the British people. The coming general election will decide if the country will wrestle back its lost sovereignty or end up as the 28th state of the European Union.

my understanding is this is not a straight vote on brexit. rather, this ‘snap’ election is a vote for MP’s only. if that’s the case, what does it really accomplish? even if johnson’s party gains the majority they are still in the eu. and what happened to the oct. 31 drop dead date? i fear the remainers and the allies in the eu will only find additional roadblocks to prevent the uk from leaving.

This is a general election, not a referendum. The hope is that the next parliament will have a solid majority for Brexit, and so it will be possible to leave. Without that Brexit is impossible.

Hopefully the Brit voters will pull their heads out and get this done. We know we can’t depend on most European nations for help in any future dire situation (the East bloc is a probable exception). If Corbin wins, or Brexit doesn’t happen because Boris suffers even more back stabs from his party’s elected MPs after winning, we can not count on Britain in that sort of situation either.