“Madam, objectively speaking, we know who and what was done. There is no uncertainty about that.” 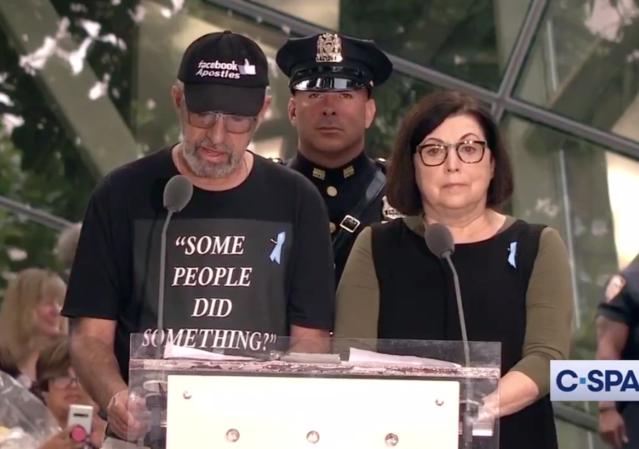 Nicholas Haros Jr. lost his mother in the 9/11 terrorist attacks that claimed the lives of more than 3,000 people 18 years ago. During the reading of the names Wednesday, Haros had a message for Rep. Ilhan Omar and “The Squad.”

“Today I am here to respond to you exactly who did what to whom. Madam, objectively speaking, we know who and what was done. There is no uncertainty about that. Why your confusion? On that day 19 Islamic terrorists, members of Al Qaeda, killed over 3,000 people and caused billions of dollars of economic damage. Is that clear?” he said.

Nicholas Haros Jr. Is the son of a 9/11 a victim; today he appeared at NYC commemoration & unloaded on @IlhanMN

"Madam, objectively speaking we know who and what was done, there is no uncertainty about that … 19 Islamic terrorist members of al Qaeda killed over 3,000 people." pic.twitter.com/iXWvGIeySc

The New Jersey resident, who lost his mother Frances in the 9/11 terror attacks, ripped the Minnesota congresswoman on Wednesday during a reading of victims’ names at Ground Zero after Omar’s infamous remarks earlier in the year in which she described the most horrific attack to ever occur on the American homeland simply as “some people did something.”

“Today I am here to respond to you exactly who did what to whom,” said Haros Jr., who sported a shirt with Omar’s words and was met with some applause from a crowd of families and relatives who had gathered for the ceremony. “Madam, objectively speaking, we know who and what was done. There is no uncertainty about that. Why your confusion?”

He continued: “On that day 19 Islamic terrorists, members of Al Qaeda, killed over 3,000 people and caused billions of dollars of economic damage. Is that clear?”

As Haros Jr. spoke, he was standing just steps away from the site of the former World Trade Center’s south tower — where his 76-year-old mother, Frances, walked into work one pleasant Tuesday morning and never returned home.

“But as to whom? I was attacked. Your relatives and friends were attacked,” Haros Jr. said, looking out to the crowd. “Our constitutional freedoms were attacked and our nation’s founding on Judeo-Christian principles was attacked.”

He added: “That’s what some people did,” Haros Jr. concluded. “Got that now? We are here today congresswoman to tell you and the Squad just who did what to whom. Show respect in honoring them, please.”

At a CAIR banquet in March, Rep. Omar was recorded saying ““Here’s the truth: Far too long we have lived with the discomfort of being a second-class citizen and, frankly, I’m tired of it, and every single Muslim in this country should be tired of it. CAIR was founded after 9/11 because they recognized that some people did something, and that all of us were starting to lose access to our civil liberties.”

Naturally, the national news media ran to her defense.

September 11th was an attack on all of us.

We will never forget the thousands of Americans who lost their lives in the largest terror attack on U.S. soil.

I will continue to fight to make sure we care for the first responders and families who lost loved ones. #NeverForget

Thank you, Mr. Haros, for saying what needed to be said!
Bravo and amen!

Well! Ms. Omar you response is TOO Little TOO Late! We know who you are and with whom you stand!

Elmi/Omar makes me want to vomit. She is a disgrace. A liar, fraud, cheat, adulterer and who knows what else. She should never have been allowed to enjoy the blessings of liberty in this great nation. She is grossly unworthy of them, as she proves every time she opens her mouth or tweets out her ignorant, stupid twaddle.

i’m all in favor of stripping her of her citizenship and sending her back to the paradise she left to come to this horrible place in a vain attempt to make us better people.

either that or she can FOAD.

I must admit I prefer the second option.

I can’t find it, but someone found a tweet of hers from September 12, 2001, and it stated “Allahu Akbar” with a few choice words afterward. I don’t know how to look at archived tweets on Twitter.

but you can find damn near anything on the net. 😎

Valid point! My first thought when I read it was I didn’t realize it was around that long!
Snookered again!

I despise that vile woman, but I do’t think her tweet is directly related to the attack in Benghazi.

I think it might be related to the arrest of the dude who made the video that Crooked Hillary blamed for the attack.

The first mention about his arrest was on September 27. Hillary had been telling everyone and their dog she’d have him arrested.

It’s quite possible that CAIR was the first organization to be informed when the man was being arrested, even before our corrupt media learned about it.

A better phrasing would have been, “On that day 19 Muslims, following Islam and the express instructions of their prophet and their Qur’an, killed over 3,000 . . .”

There’s entirely too much pussy-footing around Islam. Islam is the source of the hate. I wish more would come right out and follow Howard Cosell wise advice “to tell it like it is.”

Sorry, but I’m limited to only 1 thumbs up

I made the same observation to a friend at dinner this evening. He agreed.