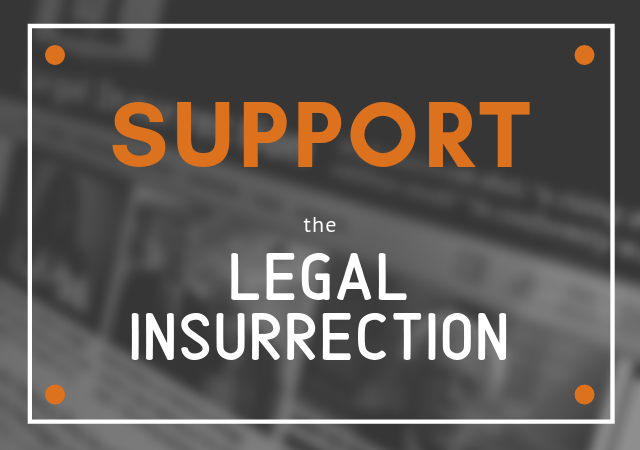 The Legal Insurrection Foundation launched just over 6 months ago.

You know about our exclusive Gibson’s Bakery v. Oberlin College coverage. We made the investment to cover the trial in-person every single day because we saw what others didn’t — that the case was a real life example of so much we have covered for the prior decade in terms of social justice warfare gone mad. Legal Insurrection readers were weeks ahead of the rest of the world in knowing about one of the biggest cases that rocked the higher ed world. We’re still on the case, when others have faded away, and will continue to report.

You may find the attached compilation of media coverage of our Gibson’s coverage, put together in June, to see the impact we’ve had.

We’ve carried that impact into many other fields, including our investigation of the anti-Capitalist/anti-Israel/anti-American “intersectional” coalition. We’ve teamed up with the Free Beacon in some of these investigations, and we’re carrying that forward on our own as well. I think you’ll be impressed in the coming months.

What you don’t see is that we also serve as a research and support resource for many groups and individuals who share our concerns and goals.

Beyond the investigations and research, we’re focused on building community. That’s always been important to me, but now more than ever as high tech institutions are corrupted by the same social justice warfare we’ve seen on campuses. We’re making a concerted effort to reach out to existing readers and new audiences through appearances around the country. Our events in Houston, Austin and D.C. are just the start.

Reader donations are a critical part of this legal insurrection. You can make an impact.

Donations can be made by credit card, PayPal, or check (details at the ‘Donate’ link).

All donations to the Legal Insurrection Foundation are tax deductible to the full extent the law allows.

Note, I’m pretty sure you could replace some of that banner ad space from Google with reader biz sponsor pages for decent cash. This would actually be a write off AND we could keep the money out of the pockets of silicon valley AND make the clicks happen on OUR terms and not silicon valley’s terms.

Sort of like Rush Limbaugh and Adam Carolla, LI is big enough to play by your own rules.

Just rent the space for days/weeks/month.

I’ll pledge when my pension check hits, but, PLEASE, can you get rid of that flashy-blinky ad with someone painting their teeth? It’s VERY distracting and annoying. Thank you.

It was just last week out of curiosity I Googled L.I. and Oberlin with and without qualifiers. Very little came up even with modifications. But taking the same inquiries to Duckduckgo…ta da, a different story. The references and links were in pages. Amazing? NOT. What goes for journalism vs propaganda is in your face obvious.
Thanks to L.I. and now it’s affiliations, the quality of what we get via them is so much for the better because of Prof. J. and his “mission”. Kudos to the L.I. Team!

I just started a small biz this year and have noticed that searching with my exact business name still doesn’t bring up a hit in either bing or google. The page is supposedly set up with all the right boxes ticked to be search engine ready.

I think the search engine racket is now in the extortion business for small business… and similar his happening for journalism. I have no doubt all of silicon valley has it’s finger on the scales for keeping sites like this dark.

I tried adwords for a day… and quickly found it’s complete click fraud. My search terms and geography were so specific I should have not gotten 3 hits in a month, but Google says not one, but 3 people in that geography searched on something completely generic about that town and clicked on my ad which was VERY specific…then went to my site, but didn’t click through to anything pertaining to what the ad was about. Google also decided that when I set the budget up for this test run to be $100, that I really meant to spend $300. Glad I checked and the spend was more like $14.

These weren’t ads placed on sites and some blog supporter clicking through (like I do here at LI), this was Google saying someone living in a specific geography typed something into a browser to bring up an ad. So there you have it.

$25.00 and my apologies…
You bring so much perspective to current events, along with so many of your dedicated followers…
I cannot thank them, or you enough.
Sincerely,
Mark

Just donated. Thank you for allowing us to experience journalism, a dying craft.