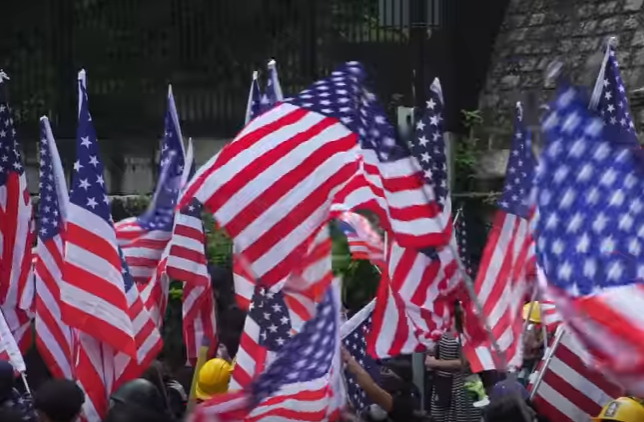 Since our report on the Hong Kong protest last week, its council has officially withdrawn the extradition bill, which caused the demonstrations.

However, it seems to be too little too late.

Massive but peaceful demonstrations against the legislation — which would have allowed extradition of criminal suspects to China for trial — long ago morphed into increasingly violent clashes with police over a much broader series of demands aimed at curbing the Beijing government’s deepening control over the semiautonomous Chinese territory.

For the protesters, it now appears there is no going back.

Student activist Joshua Wong, who is out on bail after being arrested last week because of involvement in demonstrations, wrote on Twitter that people would not believe the announcement was sincere.

This weekend’s demonstrations featured one where thousands of protesters sang the Star-Spangled Banner and called on President Donald Trump to “liberate” the city.

They waved the Stars and Stripes and placards demanding democracy.

“Fight for freedom, stand with Hong Kong,” they shouted before handing over petitions at the U.S. Consulate. “Resist Beijing, liberate Hong Kong.”

Esper made his call in Paris as police in Hong Kong prevented protesters from blocking access to the airport but fired tear gas for a second night running in the densely populated district of Mong Kok.

Chinese media was quick to promote the government’s stance that there will be no #KongKExit from the mainland.

Hong Kong is an inseparable part of China and any form of secessionism “will be crushed”, state media said on Monday, a day after demonstrators rallied at the U.S. consulate to ask for help in bringing democracy to city.

The China Daily newspaper said Sunday’s rally in Hong Kong was proof that foreign forces were behind the protests, which began in mid-June, and warned that demonstrators should “stop trying the patience of the central government”.

It will be interesting to see if this plea to Trump will have an impact on the upcoming trade talks. It looks like progress has started. Trump has found a new stick to take into the meetings: Decoupling China from manufacturing.

The decoupling push is quite different than any U.S. efforts to get China to open up more of its economy to American companies. Instead, it focuses on reducing America’s extremely heavy reliance on China for so much of its manufacturing needs.

Even if China’s economy weren’t so closed off to so many American goods and services, a strong argument has long been made that the U.S. needs to diversify its sources for imports. While finding those new sources wouldn’t necessarily do anything to dent America’s trade imbalances, it would reduce the risks of a major disruption to the U.S. economy based on disputes or other problems connected to a single foreign country.

…Just five days after that trade war flare up, the Nikkei business daily reported on Aug. 28 that Google is shifting its Pixel smartphone production to Vietnam from China starting this year and that the company is also looking to shift some of its smart home speaker assembly to Thailand.

It’s not that Google is the first U.S.-based company to announce some shift away from China; more than 50 other big names have moved out or scaled back. But the timing of Google’s reported plans and how they seem to have affected Beijing can’t be ignored.

It will be harder on China if it rolls its tank over the golden goose of Hong Kong if the US continues the decoupling path. It will need global goodwill and Hong Kong’s business centers to maintain any semblance of a sound economy.

The reason you dont need to thank me is. I had very selfish reasons for wanting to go home.

I could holld my nieces and nephews in my hands