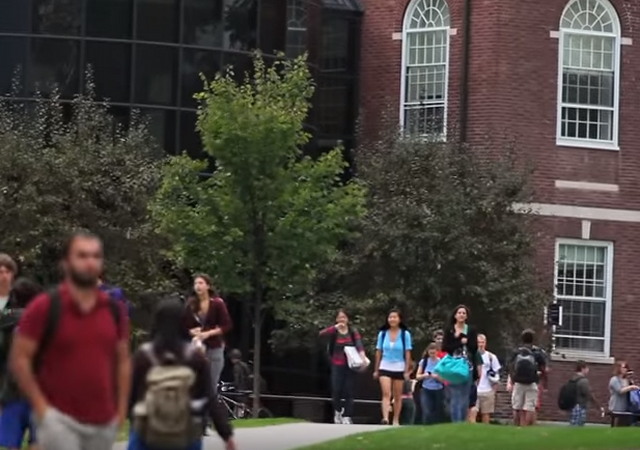 Many Americans are losing faith in our system of higher education, mostly Republicans and Republican-leaning independents. It’s not hard to understand why. The left has controlled higher education for a long time, but in recent years, it has gone into Orwellian territory.

The Growing Partisan Divide in Views of Higher Education

Americans see value in higher education – whether they graduated from college or not. Most say a college degree is important, if not essential, in helping a young person succeed in the world, and college graduates themselves say their degree helped them grow and develop the skills they needed for the workplace. While fewer than half of today’s young adults are enrolled in a two-year or four-year college, the share has risen steadily over the past several decades. And the economic advantages college graduates have over those without a degree are clear and growing.

Even so, there is an undercurrent of dissatisfaction – even suspicion – among the public about the role colleges play in society, the way admissions decisions are made and the extent to which free speech is constrained on college campuses. And these views are increasingly linked to partisanship.

A new Pew Research Center survey finds that only half of American adults think colleges and universities are having a positive effect on the way things are going in the country these days. About four-in-ten (38%) say they are having a negative impact – up from 26% in 2012.

The share of Americans saying colleges and universities have a negative effect has increased by 12 percentage points since 2012. The increase in negative views has come almost entirely from Republicans and independents who lean Republican. From 2015 to 2019, the share saying colleges have a negative effect on the country went from 37% to 59% among this group. Over that same period, the views of Democrats and independents who lean Democratic have remained largely stable and overwhelmingly positive.

The share of Americans saying colleges and universities have a negative effect has increased by 12 percentage points since 2012. The increase in negative views has come almost entirely from Republicans and independents who lean Republican. https://t.co/KHMpWNAV55 pic.twitter.com/MdmRJaAKfj

This is one of the reasons many conservatives oppose the idea of free (taxpayer-funded) college. Why should they fund an industry which is overwhelmingly partisan and opposed to them?

Robby Soave of Reason has more on this:

Survey: 59% of Republicans Now Think College Is Bad for America

Only half of all Americans now have a positive view of colleges and universities, according to a new survey from Pew Research. The number of people who take a negative view has increased from 26 percent in 2012 to 38 percent in 2019.

The change largely reflects a growing dissatisfaction on the right with the culture of college campuses. The percentage of Republicans who see value in higher education has collapsed in recent years, from 53 percent in 2012 to just 23 percent in 2019…

Higher-education leaders need to be cognizant of the public’s concerns. The majority of people—Republicans and Democrats; whites, blacks, Asians, and Hispanics—do not believe race should be a factor in admissions decisions, and yet some of the most elite institutional educations in the country have defiantly maintained such a practice.

If current trends in higher education continue, expect the number of people who disapprove to rise.

Three part comment on the subject of higher education.

1. Direct Funding to University.
The federal government must stop funding universities and colleges directly. Instead they should fund specific research needs of a particular agency or department. So the agriculture department could fund say University of Iowa to conduct a ten year study on the effects of using marginal land to grow corn.

2. Direct student funding.
Federal government should restrict use of any Pell grant, subsidized loan, etc to ‘real courses’. The basic 2 year general liberal arts studies; Economics, U.S. History, Western CIV, Into to Psych, Sociology, Biology, Algebra, Foreign language, this is what kids should be receiving so those courses would be eligible for funding. As would STEM degrees along with a traditional trade school degree or certification.
No funding for courses about ‘the cultural impact of 18th century lesbian Latina witchcraft.

3. Personal choices.
Students wishing to study non funded subjects can get a job and pay for that nonessential claptrap themselves.
Philanthropist funding is still just fine so if Daddy Warbucks wants to fund a university department of some nonessential claptrap he is free to so. This is still a free country.
GI Bill use would be left to student’s discretion. It is an earned benefit and if that particular veteran chooses to study something that is fine. That veteran is free to waste their time and money.

Graduate school. Replacement rate funding for Masters and PHD in approved doctrines only. So if ten PHD employed teaching US History are projected to retire in six years then funding for ten PHD in US History would be allocated. Students not selected as part of that cohort can pay for their own grad school.

I’ve known many a “well-grounded” conservative sent off to college and come back a raving Leftist lunatic.

The growing suspicion and distrust of colleges is one of the few welcome signs in American life.
Colleges are too expensive–not because of risimng faculty salaries, but the ever increasinging number of paper pushing bureaucrats; the ever larger number of worthless required courses –such as ethnic studies, sexual and gender studies–to provide jobs for affirmative action types and left-wing propagandists; and the proliferation of remedial courses to remedy the
gaps from the ever worse public secondary school system.