“They feel like this is the time to step up…Women are reaching out to us who feel displaced from the current party.” 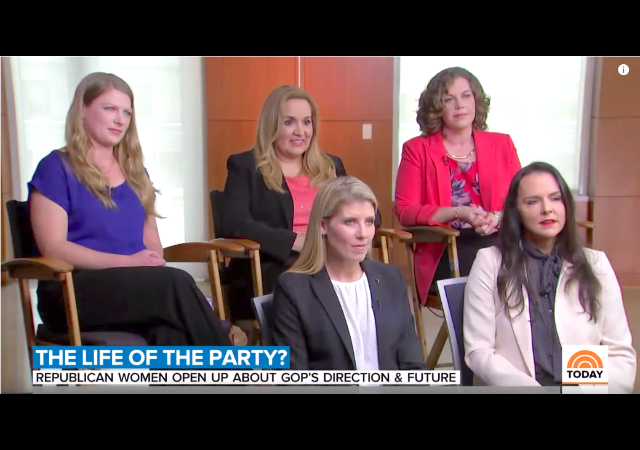 Patti Russo, the woman in charge of the prestigious Women’s Campaign School at Yale University, told NBC News that the majority of calls she has received in the last year came from Republic women.

Russo explained the school collected “triple the number of applications from Republicans” because these women are “tired of being quiet, and they know they have a lot to give.”

The batch of applications contains a variety of women from homemakers to prosecutors.

NBC News spoke to Ramirez Mukherjee who plans to run for a Congressional seat:

An investment manager who is pro-choice, pro-gay rights and concerned about climate change, Ramirez Mukherjee said she’s stepping up in the hope of helping to change the perception of her party.

“There are so many people like me in the urban centers but we are all just in hiding and don’t get a platform,” said Ramirez Mukherjee, 46, who is Mexican-American and holds graduate degrees from Columbia University and the University of Pennsylvania’s Wharton School.

“I want to get out there and show people that you can be a Republican and be considerate and kind and diverse,” added Ramirez Mukherjee. “We need to have new role models in the party.”

Anne Smith somewhat mirrors Mukherjee, but she describes herself more as socially moderate and fiscally conservative. Smith wants to land in the Virginia General Assembly:

She spent two years in Afghanistan working to help stabilize the local government after coalition forces ousted the Taliban in the early 2000s.

But Smith, who describes herself as fiscally conservative and socially moderate, now feels like it’s the U.S. political system that’s broken — and her party is a part of the problem.

“I’m really frustrated with the Republican party,” said Smith, 37. “It’s losing women voters, and it doesn’t seem to be doing anything about it.”

“It is disparaging and I can recognize that, but it’s not going to dissuade me from running,” she added. “In fact, it would just say there’s more of a reason to show that there are women who will stand up and be in the Republican party.”

The growth of Republican women for office goes beyond the Women’s Campaign School at Yale University. The Super PAC Republican Women for Progress has seen a jump in interest as well.

The PAC acquired $1 million in one month last fall after it promised to support “Republican women’s voices.” Around 50 women throughout the US have received help from this group as they venture into politics on all levels:

“We can’t keep up with all the folks reaching out to us,” co-founder Jennifer Pierotti Lim told NBC News.

“Without a doubt, it’s definitely more Republican women than I’ve ever seen be interested in running. They feel like this is the time to step up…Women are reaching out to us who feel displaced from the current party.”

The National Republican Congressional Committee’s spokesman announced it has a “record number of women running for the House.” VIEW PAC has “at least twice as many serious female candidates this election cycle compared to the last.”

Women within the Republican Party found resistance from within to run for office. One woman. Emily Pelphrey, had enough and left. Now she supports Joe Biden.

The lack of support came to the forefront when Rep. Elise Stefanik (R-NY) “came up against resistance over a plan to encourage more women to compete in GOP primaries.”

That resistance may go away now with so many Republican women pushing forward. Russo said the “surge in interest has convinced her that more Republican women are poised to enter politics no matter the level of support they receive.”

The mistake your making is over the year the distinction between Republican and conservative has become clear. The left has its problems between democrats and radicals. I myself a conservative and am sick of the RINO brigade running for office Dole, McCain, Romney. IF I wanted a liberal in office I could vote for a liberal no need for liberal lite.

Rinos are slow death. The left is a quicker death.

That is, if you want to die.

Condemning your the Republican party is the first sign these women are nothing but trouble. They end up being the same as Ana Navarro or Nicole Wallace as the favorite Republican of the MSM who only exist to talk about how Deplorable the Trump supporters are.