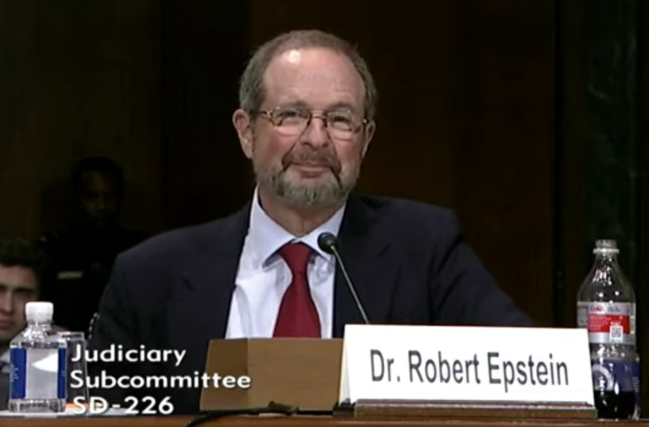 President Trump tweeted about it, the leftstream media went into “fact check” meltdown mode, and Democrats, including Clinton herself, parroted Google’s claim that Epstein’s report was “debunked.”

Dr. Robert Epstein is a psychologist, professor, and author. He’s the former editor-in-chief of Psychology Today.

Dr. Epstein is a liberal Democrat. In testimony before the Senate Judiciary Committee (see below), he described himself as a “vocal public supporter” of Hillary Clinton. He said that to characterize him as not a Republican and not a conservative is “an understatement.”

Epstein testified that in the 2016 election, Google generated a minimum of 2.6 million votes for Clinton through deceptive manipulation of search results. He warned that if, in 2020, companies like Google and Facebook all support the same presidential candidate (as surely they will) they could affect up to 15 million votes, e.g. by “go vote” reminders sent only to those believed to be Democrats.

. . . .  Epstein isn’t just a respected psychologist. He’s a liberal who supported Hillary Clinton. Epstein has no political interest in arguing that her vote total was inflated through manipulation.

The parallel claim cannot be made when it comes to those who argue that Russian efforts on social media swung the election to Trump. To my knowledge, those who advance this theory are all Democrats and/or Trump haters. They have a strong political interest in claiming “we was robbed.”

Here is analysis/testimony on @Google's impact on our elections to which President @RealDonaldTrump is referencing, and which Hillary Clinton and this era's totalitarian left are now trying to suppress. Read and RT. @drrepstein https://t.co/FmpCGzdHTshttps://t.co/RKDalw5Cpi

Now, switching to .@HillaryClinton: This is going to hurt me to write, because I & my whole extended family have been strong supporters of the Clintons for decades. I have a framed, signed letter from #Bill on the wall near my desk. But #Hillary should be ashamed of herself. pic.twitter.com/FKyLiKonyw

#Hillary has long depended on #Google for both money & votes. Her largest donor in 2016 was Alphabet/Google. Her Chief Technology Officer during the campaign was Stephanie Hannon, a former Google exec. And then there's #EricSchmidt, longtime head of Google – the guy in the pic: pic.twitter.com/dSV8wOPwAH

A leaked email showed that in 2014 #Google's #EricSchmidt offered to run #Hillary's tech campaign (see pic). In 2015, Schmidt in fact funded The Groundwork, a highly secretive tech company, the sole purpose of which was to put Clinton into office. https://t.co/rXMNH9bLYV pic.twitter.com/MRjGpCJcvr

Hillary called out Epstein in her response to Trump and claimed that his work had been “debunked.”

The debunked study you’re referring to was based on 21 undecided voters. For context that’s about half the number of people associated with your campaign who have been indicted. https://t.co/0zHnWvGjSv

Epstein responded on Twitter and on the Tucker Carlson show.

#Hillary: If my work has been "debunked," why was it included in a volume just published by #Oxford U.? Why have I been invited to speak about it at prestigious venues worldwide: #Stanford U., #Yale Law School (where both you & Bill went), even our #Senate (where you served)? pic.twitter.com/rmMeB1oJn3

#Hillary: If you examine my work carefully, you will find that it adheres to the very highest standards of scientific integrity. You will also conclude, I believe, that #Google poses a serious threat to the free-&-fair election & to human autonomy. See https://t.co/T2coTfZt5m

Here's my whole #Trump/#Clinton tweetstorm from yesterday – all 18 tweets in chronological order, with the photos & links – easy to read. You can even link back to Twitter from this HTML file. Give it a few seconds to load fully…. https://t.co/AUx70i0efS pic.twitter.com/5UYn4y3hGd

She lost the popular vote in the rest of the country by one million people. I don’t know where the 2.6 million votes swayed or manipulated by Google were cast. Certainly some large number of those “Google votes” were cast in California. But when you spread what’s left over after California into the other states, Hillary’s thumping in the electoral college would have been a lot worse–but for those votes.

Imagine the state of high dudgeon the liberals would be in if they learned that G and FB helped skew the results of the election to DJT by influencing the votes of only a small fraction of 2.5 million voters. It’s not the number or the results, it’s the fact that it happened at all.

Now imagine if the results were skewed by Bechtel, Exxon, or GE, instead of G and FB. Think the liberals would say “They have a right to influence the election”?

DaveGinOly: Think the liberals would say “They have a right to influence the election”?

They do have a right to influence the election. However, there are a number of laws to reduce undue influence. And people have the right to complain about large corporations and their undue influence, but the complaint about Google is not well-supported.

Let’s start taking odds that Dr. Robert Epstein will commit suicide in the not too distant future…[sarc]

Along with “Don’t be evil (for some value of “evil.”)”, recall their old motto: “Organizing the world’s information.”

They didn’t say for who’s use or advantage.