Nadler insisted that Pelosi “has been very cooperative” with his committee. 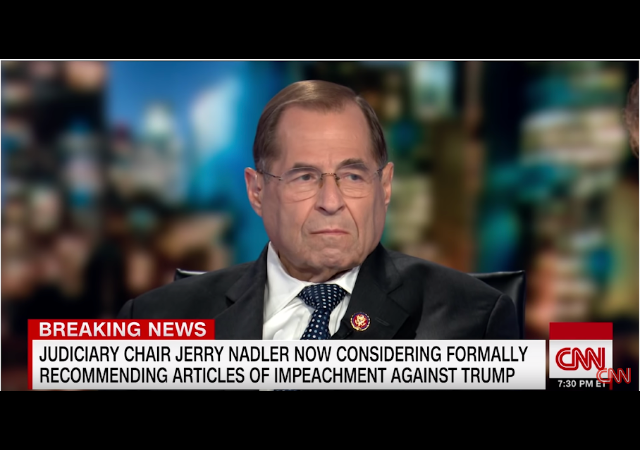 “This is formal impeachment proceedings,” Nadler said. “We are investigating all the evidence, we’re gathering the evidence and we will at the conclusion of this, hopefully by the end of the year, vote to, vote articles of impeachment to the House floor or we won’t. That’s a decision that we’ll have to make. But that — that’s exactly the process we’re in right now.”

“All right, so when you say formal impeachment proceedings, have you started drafting or preparing articles of impeachment should you need them?” host Erin Burnett asked.

Nadler and his committee have received some pushback from Pelosi. She has described impeachment proceedings as divisive, a way that could impede the Democrats from winning in 2020.

Nadler insisted that Pelosi “has been very cooperative” with his committee.

Hearings will begin in the fall “with key witnesses whose testimony would be part of the committee’s impeachment deliberations.”

The committee took that first step this week when it filed a lawsuit against Don McGahn, the former White House counsel. He “has defied the panel’s subpoena for testimony about allegations that Trump obstructed justice when he sought to constrain or otherwise end the Mueller investigation.”

The committee believes McGahn is their “most important fact witness in its consideration of whether to recommend articles of impeachment.”

Funny thing: He’s confirming something that is not actually true. This is an escalation of his claim that his committee filing that lawsuit is a de facto formal impeachment inquiry. Yes, that is using de facto as a modifier for de jure; the committee hasn’t actually held a vote to open a formal impeachment inquiry within the committee. Nadler simply views the lawsuit as the launch of such an inquiry by inference, which he intends to bolster his case before the judge of the gravity of his request.

I would have held back, but I saw a Tweet by a Republican Congressman raising these same points last night. If other members of Congress don’t know that he’s held a new vote, even within just his committee, I feel safe assuming that none exists.

The Penguin will face a tough AOC backed candidate in the 2020 primary. Nadler doesn’t have the energy to fight someone 40 years younger with Social Media Savvy. This is his last shot at fame. The Penguin will be on ice after 2020.

The Democrats seem to be trying to recreate some kind of horror movie that goes from one disaster and destruction to the next.
I would not have thought Nadler to be so stupid or insane. He is in a safe district and can deflect and ignore. Instead he goes full squad.
Is there a red flag law that can pull a politician out of his office while a sanity check is done?

“I would not have thought Nadler to be so stupid or insane.”

Perhaps he suffers from Rumination Syndrome.

He notes that Pelosi has been helpful and approved his subpoenas. This is a Nancy Pelosi production. Don’t focus on the ugly fat blob in front of the camera; the planning goes all the way to the top.

This way the “establishment” Dems can prove their relevance and fend off the Muslim insurgency on their left, by giving the progs something else.

Mueller seemed ridiculous and unreal at the start too. There was no basis for that, then all of a sudden Sessions stepped out of the way and it was on!

A lot of smoke and mirrors going on with Wadler and his Judiciary committee. His problem is that the WH is going to assert Executive Privilege over the testimony of almost anyone Wadler wants to get to testify. And the only people he really wants to get to testify are close enough to Trump that Executive Privilege will work. Not the sort of 5th level bureaucrats that Obama tried to shield, but people who deal with POTUS on a day to day basis – and that is because all Wadler and the Dems have is the half baked, legally almost frivolous, Obstruction theory posited by Weissman and the other prosecutors on the Mueller investigation. They figure that if they interview enough people who dealt closely with Trump, they can dig up something that looks almost plausibly like Obstruction of Justice (ignoring, of course, that legally, for a number of reasons, it isn’t, including the rewriting of the statutes to change the Mens Rea from specific intent to general intent, as well as Article II Executive power, etc). And the only way that Wadler has a chance at overcoming Executive Privilege is if he is investigating impeachment.

But this is a slippery slope, camel’s nose under the tent, sort of argument. IF all it takes for a Judiciary Committee to override Executive Privilege, is to declare that they are investigating impeachment, then that is exactly what they are going to do henceforth, and Executive Privilege will become a nullity. Both parties, when House and Presidency are split partywise. House subpoenas someone. WH asserts EP. House Judiciary chair claims Impeachment. Which is why it isn’t going to work. The Judiciary doesn’t like getting stuck between the other two branches in Separation of Powers political disputes, and is almost assuredly going to ultimately agree with the Executive here, given the obvious political nature here of Wadler’s moves, and that a two year SC investigation failed to find probable cause for a single crime by Trump.

No matter what Wadler calls it, it isn’t an official impeachment investigation, because the House hasn’t voted to open one. And isn’t going to, because any Trump district Dem House member who votes to open impeachment for such nakedly partisan reasons, can kiss his seat goodbye. Pelosi can count votes, and knows that a vote for opening an impeachment investigation is a pretty good guarantee that she will be a one term Speaker. So, it isn’t going to happen, because the motion would apparently have to come from the Rules Committee, which is also called the “Speaker’s Committee”, since it is the mechanism that Speakers use to control the House agenda.

It is that political risk, that distinguishes where we are now with Wadler and his committee, and where they would be with a formally authorized impeachment investigation, and that very lack of political risk is why I very much expect that the Judiciary will ultimately reject Wadler’s subpoenas on the basis of Executive Privilege. If the Dems want impeachment that badly, let them put up control of the House in the next Congress as their ante. They won’t.