Michael Moore: Only Michelle Obama can save us from 4 more years of Trump

Michael Moore: Only Michelle Obama can save us from 4 more years of Trump

Everything is unfolding just as we have been predicting for two years ago. 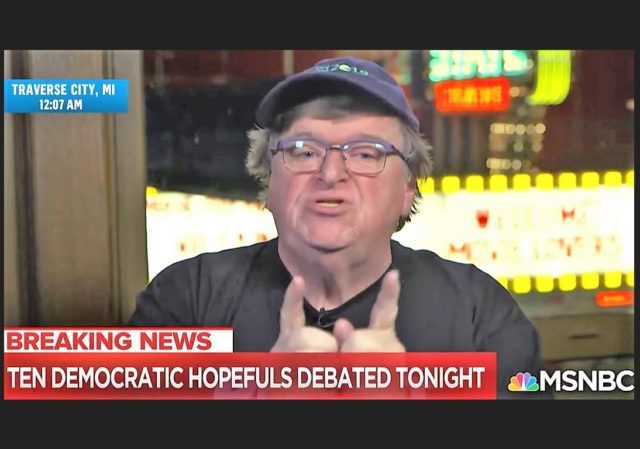 Everything is unfolding just as we predicted almost two years ago.

We predicted that as the Democrat presidential field looked likely to yield a sure loss to Trump, Democrats would turn their lonely eyes to Michelle Obama, possibly as late as the convention if it looked like a Bernie win.

I expected panic to set in at the prospect of a Bernie nomination, but the Democratic field is so horrible as displayed at the first two rounds of debates, that panic is setting in early.

I wrote in February 2018, Michelle Obama 2020 coming into focus with Memoirs release just after 2018 midterms:

The timing [of her memoir release] fits perfectly with my prediction. It’s too soon to signal presidential intentions, but not too early to plan ahead.

Let the commoners like Kirsten Gillibrand, Elizabeth Warren, Bernie Sanders and assorted other Democrat hopefuls jockey for position. They do not have the star power of Michelle. It’s why there was a rush to embrace Oprah when after her Golden Globes speech — Democrats are desperate for someone who can spark the Obama magic once again, who can serve to unify and motivate various factions of the party the way Mr. Obama did.

Who better than a real Obama? Someone whose narrative will be another first….

Don’t doubt that if Michelle chooses to run, she will win the Democrat nomination. Her candidacy will suffocate all others. They dare not deprive the Democrat Party of an Obama third term….

All she has to do is just Say Yes to the Nomination.

That memoir, by the way, is the best selling memoir of all time.

Michael Moore is openly calling for help from Michelle. Newsbusters has the transcript (emphasis added):

Who can crush Trump? Who is the street fighter? We saw it in Bernie last night. Who is the street fighter that can crush Trump? And frankly, I think there’s a person that could do this, if the election were held today, there is one person that would crush Trump . And she hasn’t announced yet. And her last name rhymes with Obama. In fact, it is Obama. Michelle Obama. Everybody watching this right now knows she is a beloved American and she would go in there and she would beat him. She would beat him in the debates, he wouldn’t be able to bully her, he wouldn’t be able to nickname her and she is beloved.

What’s the chance Michelle Obama will play the role of savior?

Seems that after Democrats on stage last night trashed her husband’s key policies on Obamacare and immigration, the notoriously thin-skinned Mr. Obama must be furious. It’s bad enough when Trump vows to erase the Obama legacy, it’s worse when Democrats pledge to do so also.

I have little doubt that Michelle Obama doesn’t want to run for or be president, as she has stated. Or that if asked today, she’d still say no.

But when the huddled masses, including her husband, turn to her and plead with her to save them from Orange Man Bad, don’t count it out.

Why give Michael Moore any space at all? Surely the beautiful people in the entertainment business look down on this short, unattractive, overweight toad enough to not take his words too seriously.

The only way she’ll be able to be president is if she never has to show up. That’s the only kind of job she’s ever had.

“Shove it up Trump’s fanny,
Vote for a tranny”

What a talentless fat slob! I am stunned he has not dropped dead of a heart attack. I also hear he smells bad!