But I guess you can still call and depict non-leftists as clowns. Classic double standard. 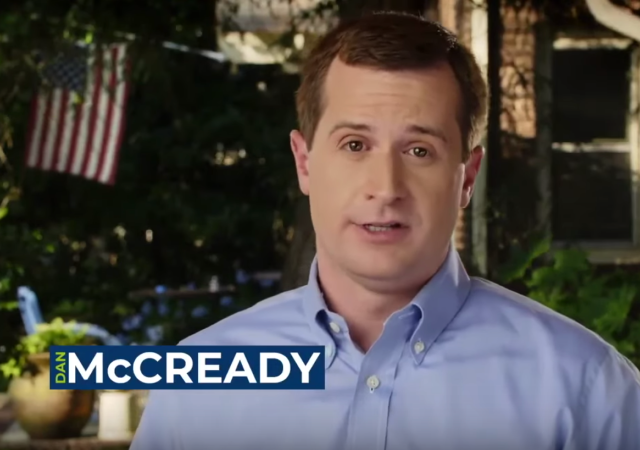 Everything is a white supremacist slur!

Clowns. I know clowns are awful, but come on. That’s why we call people we don’t like clowns. What about us who call 99% of the politicians clowns?

Bishop expanded on that ad this week. He went more in-depth as he attacked “their policies, such as taxpayer-funded healthcare for illegal immigrants and ‘open borders.'”

McCready jumped all over the ads. He retweeted an article from Daily Kos written by David Nir, which publishes attempted to spin the video as Bishop’s response to the weekend shootings in Dayton and El Paso:

The clown line, Nir wrote, was “not just a particularly lame joke. It turns out there’s a disturbing genesis. Jared Holt, one of the tireless folks at Right Wing Watch, reported in April that white supremacists have begun adopting a version of the infamous far-right ‘Pepe the Frog’ meme decked out in clown garb that they call ‘Honkler,’ to symbolize ‘their exasperation over an imagined state of collapse in the Western hemisphere that they largely blame on immigrants and minority groups.'”

“Whether or not Bishop understands the significance of his ‘clown’ slurs, the propagation of this meme from the cesspools of the internet directly to the highest levels of Republican power shows just how in thrall to the far-right today’s GOP is,” he argued.

Are there more instances? You betcha!

In May, Democratic presidential frontrunner Joe Biden said he has “so many nicknames” for Trump, but he “can just start with clown.”

Actor Christian Bale described Trump as “sort of a clown by comparison” when it comes to former Vice President Dick Cheney.

Oh look! You can make your very own Trump clown meme!

Shall I continue? How about The New York Daily News on July 4, 2018, depicting Trump as a clown?

My bad. It’s only a white supremacist slur when non-leftists call Democrats a clown.

I suppose we should be more truthful in describing them for what they are,Un American @sswipes.

Is there anything non-Democrats can say or do that doesn’t prompt the left to pounce and say, “We’re better than this” or “This isn’t who we are” or, especially, “racist.”