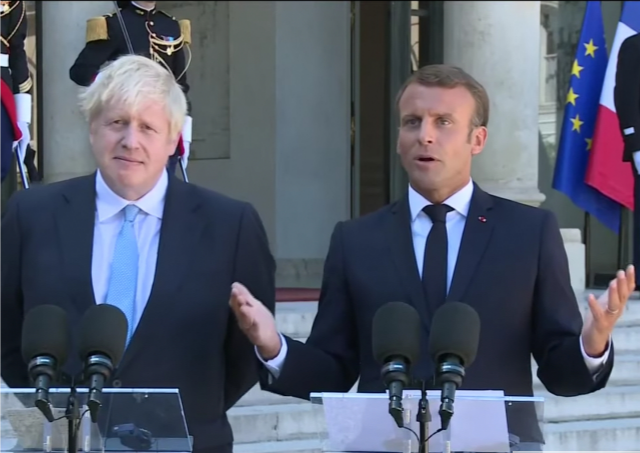 With Wednesday’s order to suspend the House of Commons, Prime Minister Johnson seems committed to leaving the EU, with or without a deal in nine weeks’ time. By extending the deadline the EU apparently wants to give pro-Brussels Members of Parliament (MPs) more time to use the parliament’s floor to stall no-deal Brexit and force a second referendum.

Some Conservative Members of Parliament (MPs) saw the French decision as a sign of weakness on the part of the EU, claiming that “Brussels was starting to crack under the pressure applied by Boris Johnson,” the Daily Telegraph reported.

The news comes shortly after former British Prime Minister and pro-EU Labour politician, Gordon Brown, claimed that EU leadership was willing to scrap the deadline. former PM Gordon said that “none of the other European commissioners, including the new president of the European commission (Germany’s Ursula von der Leyen), I believe, will hold to that October 31 deadline.”

The EU’s gambit is devised to weaken PM Johnson and embolden the pro-EU lawmakers trying to sabotage the Brexit, the former British Prime Minister disclosed. “European leaders are prepared to withdraw the October 31 Brexit deadline to ‘pull the rug’ from under the prime minister,” British newspaper The Times reported citing the former Prime Minister. “I think if that happened next week it would help us win a vote in the House of Commons and and help put the pressure back on the government,” he declared.

According to British newspaper Daily Express, pro-EU Conservative lawmakers were planning to “put forward a motion to force Prime Minister Boris Johnson to seek an extension to the Brexit negotiations unless he has reached an agreement with the EU by the October 31 deadline.” The rebel MPs were seeking support of House of Commons Speaker John Bercow in pushing a motion to this effect by the end of next week, the newspaper revealed on Friday.

The EU wants to extend Article 50 to avoid a no deal Brexit, it has emerged, as Eurosceptic MPs said Brussels was starting to crack under the pressure applied by Boris Johnson.

Emmanuel Macron was said to be ready to “withdraw” the October 31 deadline, and the European Commission said another extension was “obviously a possibility” in a clear softening of its position ahead of intensive negotiations next week.

The EU believes that by offering an extension it will undermine Mr Johnson’s argument that Brexit has to happen in two months’ time “deal or no deal”, but Brexiteers cited the news as evidence that Brussels is starting to panic.

Ahead of the October deadline, pro-EU lawmakers have been mobilizing support for legislative measures to stop a no-deal Brexit. On Tuesday, some 160 British MPs signed the so-called ‘Church House deceleration’ vowing to prevent the government from leaving the EU without a withdrawal agreement by applying “whatever mechanism possible.”

Johnson, who has a working majority of just one MP in the lower house, also faces a serious challenge from Labour party leader Jeremy Corbyn. The opposition leader wants to oust the sitting prime minister and install himself as the leader of a caretaker government with support of pro-EU Conservative lawmakers. The only thing keeping the pro-EU Tory MPs behind Johnson is the prospect of a government led by Corbyn, a much despised figure among their conservative voters.

Having failed to deliver Brexit after three years of fruitless negotiations with Brussels, the Conservative party faces an existential threat as its political base warms up to Nigel Farage’s Brexit Party. In the EU election held in May 2019, conservative voters turned away from the Tories in large numbers, opting instead for Farage’s newly-formed party. The Brexit Party won a third of the vote, and secured 29 of the 73 British EU seats. The Conservatives came a dismal third with just four seats.

On Wednesday, Farage promised to withdraw his party’s candidates if Johnson goes for a clear Brexit. “We will put country before party and support Boris Johnson, and Boris Johnson with our support would be unstoppable. Not only would he win a big majority, he’d be a hero,” Farage said on Saturday. “If Boris Johnson decides that the right thing to do is go for a clean Brexit, then we would stand down.” Johnson is yet to respond to this generous offer.

The coming nine weeks will decide, not just the political future of the Conservative party, but the fate of Britain as a sovereign nation. Whether  Johnson will rise up to the occasion, and come out as a ‘hero,’ as Farage suggests, still needs to be seen.

I think Bercow will try to prevent a clean Brexit, but morally he shouldn’t. I’ll be impressed if he chooses country over the EU and tells the Europhiles “Order!!”

But I don’t know. Bercow even disciplined Johnson during his inaugural address to Parliament, something about waving his arms too much. He’s never said anything like that to the opposition.

What does this extension mean? An extension of time to consider the same unacceptable deal that’s far worse than no-deal Brexit?

Bercow is a very small man with a nasty personal habit. It isn’t going to end well for him.