That the victims of the El Paso shooting were exploited in the anti-Israel cause says everything about the face of left-wing anti-Zionism. 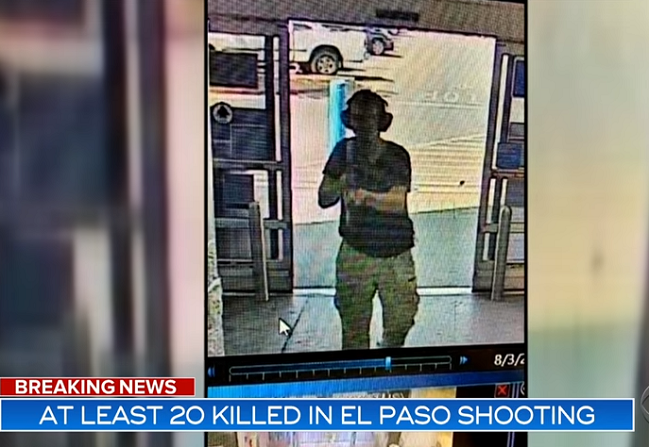 We have become very cautious in the initial reaction to mass shootings and terror attacks because so often the initial information reported by the media is wrong.

This initial media incompetence is often fed by an implicit bias to believe that the “right-wing” (however they define it) is to blame before the facts are known. In numerous instances this meant the Tea Party was blamed when the perpetrator turned out to be a leftist, and even in the Boston Marathon Bombing the immediate media reaction was that it was a right-wing attack (which later turned out to be an Islamic terror attack).

We try to exercise this caution where there is a suggestion of an Islamic terror connection until there is substantial evidence to support that conclusion, as there was in the Charlie Hebdo and Bataclan theater attacks.

That means we rarely are among the first to blame someone or some group or some movement.

Such caution is important in the El Paso and Dayton mass shootings. The initial reports from El Paso were that there were three shooters; it turns out there was one. The El Paso shooter, assuming the manifesto attributed to him is genuine, appears to be an anti-Hispanic white supremacist who also was an environmental extremist devoted to population control. Or the manifesto may be a partial troll like the Christchurch (NZ) shooter whose manifesto was designed, at least in part, to create societal conflict, a part of a sick game of manipulation. The Dayton shooter, while initially termed another white supremacist, may be a left-wing Antifa-supporting Elizabeth Warren fan, IF social media accounts being attributed to him prove to be genuine. There also are indications of a long history of mental illness and warning signs unrelated to politics. For all of this, it may be days or longer before we can definitively say what the facts motivating the shootings are.

The shootings can and should be condemned before those motivations are known, and regardless of the motivations, but the political blame-game is not waiting for that. There are numerous accusations on social media that Republican politicians and conservative commentators have blood on their hands for supporting the 2nd Amendment rights and immigration law enforcement.

Of all the horrible takes, one of the worst was by Ariel Gold, an obsessive anti-Zionist opponent of Israel whose antics we have covered before. She now is the National Co-Director of Code Pink, and specializes in disrupting speeches and events for people whose views she disagrees with. She also has been a guest on Fox News primetime shows multiple times.

We long have documented how anti-Israel activists attempt to hijack domestic U.S. events completely unrelated to Israel in order to turn them against Israel. We tracked how this happened with the Ferguson riots in 2014, and almost continuously since then, including by the false and blood-libelous claim from anti-Zionist Jewish Voice for Peace that Israel is tied to police shootings of minorities in the U.S.

According to El Paso shooter’s manifesto, he aimed to control numbers of white vs latinex Israel everyday controls numbers of Jews verses Palestinians (and African refugees) Any further questions as to why Israel is an inspiration for white nationalists/white supremacists? 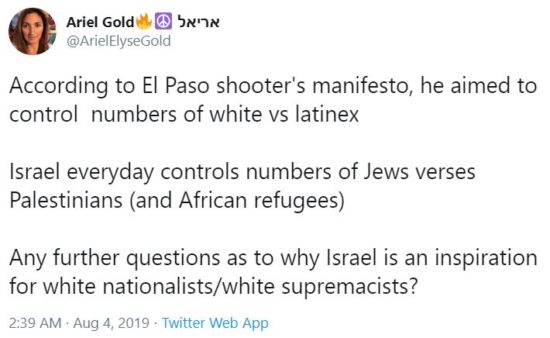 And in response to criticism of that tweet, Gold tweeted: 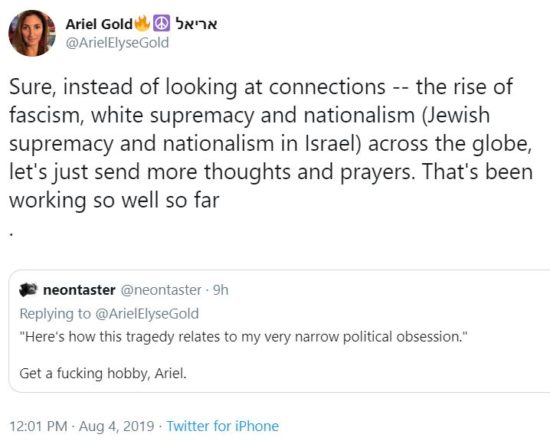 And in response to even more criticism, repeated the claims: 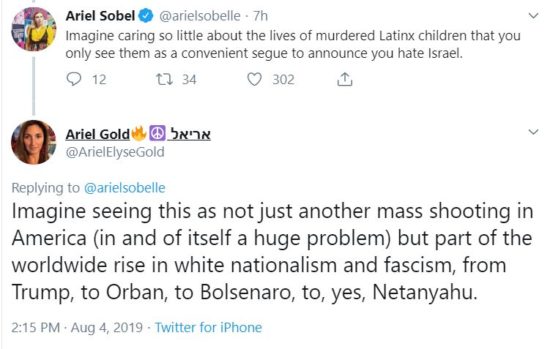 That the victims of the El Paso shooting were exploited in the anti-Israel cause says everything about the face of left-wing anti-Zionism.

Gold is an evil sick twisted witch dancing in the blood of the dead.

The Dayton Shooter was a Bernie supporter.

“Never attempt to teach a pig to sing; it wastes your time and annoys the pig.”

“It does not do to encourage bad manners; one should retaliate, urbanely but firmly.” ” If one tolerates bad manners, they grow worse.”

In order to maintain a tolerant society, the society must be intolerant of intolerance.

Seem liberal fundraising off this is sick. Of the many shooting over the weekend, the mass shooters were both isolated and left-wing nuts THe gang shooting were not much different other than they got a cookie and trophy just for going to jail.

Truly Right-wing Jews, which I assume will include those who seriously support Israel, as Israel cannot exist under Left-wing Jewish leadership, need to identify Left-wing Jewry as mortal enemy of Western civilization. As to how this relates to the point the Code Pinker is making, Right-wing Jews need to decry holding the US to a dysfunctional immigration control standard that Israel is allowed to avoid — in accordance with natural law.