“Since we are unable to say what he intended to accomplish beyond a reasonable doubt, we decline to file a criminal charge” 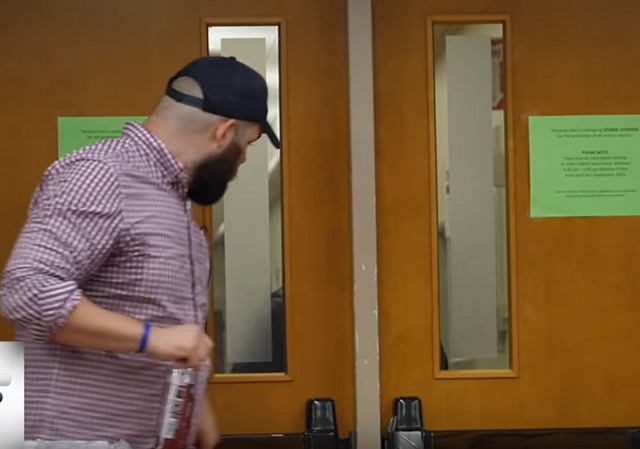 In early June, College Republicans at the University of Washington were meeting in a classroom, when a left wing student approached from the outside and tried to chain the doors shut. He was caught shortly after, and we’re now learning he won’t face charges.

Jason Rantz of KTTH Radio described the incident in June:

An alleged member of a local antifa group was arrested Monday evening for attempting — and very badly failing — to chain the doors, locking conservative students in a University of Washington classroom.

Front. The meeting caught the attention of Emerald City Antifa. On their Facebook page, the group encouraged members to show up to disrupt the event.

One person did show up, though it’s unclear if he’s directly connected with the Facebook page. But he didn’t try to simply disrupt the event; he tried to lock the students in the hall with a chain and lock.

“I saw a guy in black approach the door but there had been no protest outside or anything so antifa wasn’t necessarily on my radar,” UWCR member Zach Wildfang told The Jason Rantz Show on KTTH. “He crouched down and immediately slapped his chain around the door.”

Here’s a video of the incident:

There won’t be any charges for that.

The King County Prosecuting Attorney’s Office told Campus Reform that the individual arrested after police say he attempted to chain lock a door of the room in which College Republicans were meeting will not be charged with any crime.

“We are declining to prosecute…because, based on the facts presented, it is unlikely that we would be able to prove he intentionally committed the crime of disorderly conduct beyond a reasonable doubt…While we can speculate, the purpose of the suspect’s use of the chain is not entirely clear since there were other doorways/exits in the class that were visible and obvious,” the prosecuting attorney’s office said.

“Furthermore, the meeting itself was not in any way disrupted except to the extent necessary to immediately interrupt, chase and apprehend the suspect. While it is fair to say that the suspect had formed some plan, it is not at all clear from his actions what that plan was. The plan was fully and completely interrupted from the very moment it began,” the prosecuting attorney’s statement added.

“Since we are unable to say what he intended to accomplish beyond a reasonable doubt, we decline to file a criminal charge.”

When behavior like this goes unpunished, it only encourages more.

Chaining people in a room is “false imprisonment,” which is a crime on its own. Prosecutors don’t need to know what FURTHER crimes the perpetrator may have intended. That he intended the crime of false imprisonment is all they need to show.

And if they could show that they would have charged him with it. The problem is they can’t show that. It’s obvious that he intended something, but it’s anyone’s guess what.

That makes this another example of the states of Oregon and Washington colluding with Antifa to violently suppress the civil rights of their conservative minorities. Prosecute both states under the 1964-65 Civil Rights Acts.