Chancellor Merkel: I “feel solidarity toward the attacked women.” 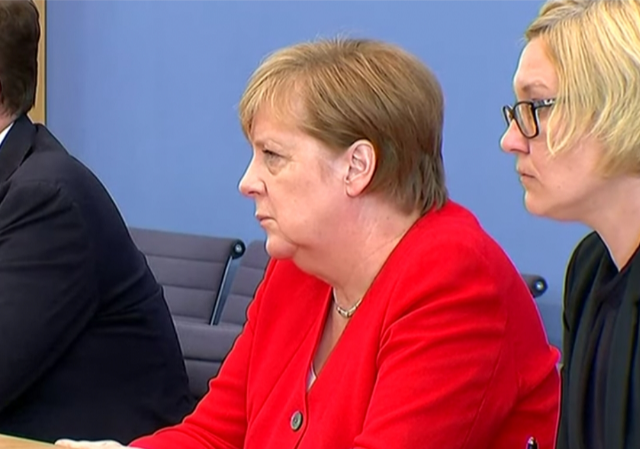 German Chancellor Angela Merkel has attacked U.S. President Donald Trump and sided with the “attacked” congresswomen in his ongoing spat with the four progressive lawmakers. “I firmly distance myself from it and feel solidarity toward the attacked women,” Merkel said at a press conference on Friday, referring to President’s remarks.

Last Sunday, President Trump tweeted telling progressive lawmakers who “came from countries whose governments are a complete and total catastrophe” to go back to where they came from to fix the problems there, and then “come back and show us how it’s done.”  The remarks triggered a media feeding frenzy and a wave of condemnation from political adversaries at home.

Chancellor Merkel’s attack on the U.S. President could be a political ploy to divert attention from the media speculation about her health. This was her first media appearance after she was seen shaking uncontrollably in public for the third time in less than a month.

“I understand questions about my health, and I have already given an answer,” Merkel said dismissing a reporter’s questions about her recurring trembling fits. “I will finish my political work in 2021,” she added, referring to the end of her fourth tenure as the German Chancellor.

“I firmly distance myself from it and feel solidarity toward the attacked women,” Merkel said at her annual summer press conference in Berlin on Friday.

The chancellor said that “people of very different nationalities have contributed to the strength of the American people.”

She added that Trump’s statements “contradict the strength of America.”

This is not the first time German Chancellor has attacked the U.S. President. In her first message to President-elect Trump, she lectured him on gender, racial, and religious equality.

Berlin had been visibly upset by President Trump’s surprise election victory over the Democratic candidate Hillary Clinton. Months ahead of the 2016 U.S. election, the German government funneled millions of euros to the Clinton Foundation.

Chancellor Merkel’s remarks come at a time when the right-wing Alternative for Germany (AfD) is surging in the pools ahead regional elections in Eastern Germany. In the key state of Brandenburg, encircling Berlin, the newcomer AfD was leading in the polls with 21 percent, while Merkel’s Christian Democrats (CDU) were trailing at the third spot with just 16 percent. Polls showed strong showing for the AfD in the eastern states of Saxony and Thuringia as well.

Merkel is that rare oddity- a German who wants to be French and try to display all the traits that have made France what it is today.

Everyone seems to forget that frau Shaky was born and grew up in the DDR- East Germany. This was back when socialism was so good that they used a wall and machine guns and minefields to keep people in.

Of course she does.

The administration should offer the UK a favorable draft economic agreement, should they do a hard brexit. And suggest the Central European nations that just escaped the USSR, form a CE group to protect themselves from the growing Greater Germany, errr, I mean, the EU.