Lindsey Graham Lobs “Communist” at “The Squad,” AOC Accuses him of Wanting to “bring back 1950s McCarthyism”

Lindsey Graham Lobs “Communist” at “The Squad,” AOC Accuses him of Wanting to “bring back 1950s McCarthyism”

And just like that, AOC cedes the high ground back over to Trump 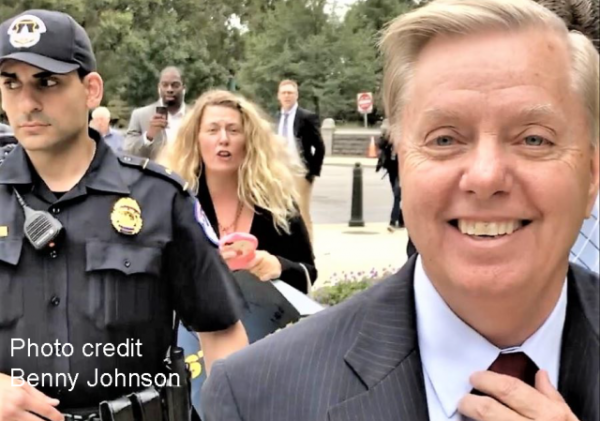 Something happened to Sen. Lindsey Graham (R-SC) on the way to Justice Kavanaugh’s confirmation.  At one point during the hearings, Graham finally “got” it and let loose a fiery tirade against the Democrats for their treatment of Kavanaugh.

It was magnificent. And he hasn’t backed down since that moment.

The left is currently in meltdown mode over some (rather carelessly worded) tweets by President Trump and his characteristic defense of himself.  Another day, another leftist meltdown, right?

Graham is now taking some heat for stating that “The Squad” are all “a bunch of communists.”

Sen. Lindsey Graham, R-S.C., was one of the first to weigh in, saying in a Fox News interview on Monday that while he agreed with Trump’s criticisms of the four congresswomen’s politics, he thought the president should “knock it down a notch” and avoid getting personal in his attacks on them.

“They are American citizens. They won an election. Take on their policies,” Graham advised.

“We all know that AOC and this crowd are a bunch of communists. They hate Israel. They hate our own country,” Graham said, referring to Ocasio-Cortez by her initials.

But knowing that, the president should “aim higher,” he said.

. . . . Graham said on “Fox& Friends” that he recently spoke to Trump and lauded him for his economic accomplishments and his military success against the Islamic State. He said Trump should contrast that with the four Democratic congresswomen’s goals, which “would destroy this country.”

“Focus on what they want to do for America, and to America, and compare it with what you’ve done. Don’t get personal. Don’t take the bait,” Graham said he told the president.

That sounds like sane, rational advice. And it would be in normal times dealing with normal Democrats.

However, Rep. Alexandria Ocasio-Cortez (D-NY) is about as radical and reckless as they come, and she wasted no time proving it by stating that Graham doesn’t think “Trump’s racism” goes “far enough” and that he “wants to bring back 1950s McCarthyism.”

I see @LindseyGrahamSC’s biggest issue w/ Trump’s racism is that it doesn’t go far enough – Graham wants to bring back 1950s McCarthyism, too.

GOP is doing this because they have no plan for our future.

We’re the ones fighting for healthcare, edu, good jobs, & they got nothing. https://t.co/pfAEATWbJl

And just like that, the tide shifts. She’s just handed the high ground back over to Trump.

You have to wonder if Graham didn’t expect that given how completely predictable AOC is when it comes to hyperbolic—and completely groundless— nutty accusations.

Get the feces out of your drawers, Cortez.

After Texas Rep. Al Green introduced articles of impeachment against President Trump for the third time yesterday, House Democrats are preparing to vote on Wednesday afternoon on whether to move forward with the process, Politico reports.