The celebration of our nation and its military will trump the petty complaints. 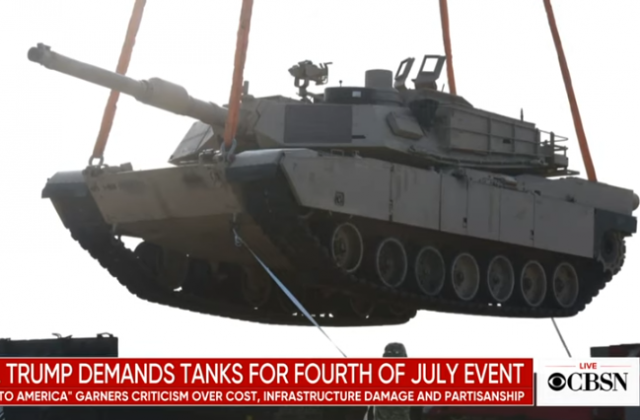 President Donald Trump is certainly shaking things up in Washington, DC, on all levels, including its annual Independence Day celebration.

Before Trump, the festivities consisted mainly of music and fireworks. After Trump, the “Salute to America” will include tanks, fighter jets..and an extravaganza of fireworks.

“Big 4th of July in D.C. ‘Salute to America.’ The Pentagon & our great Military Leaders are thrilled to be doing this & showing to the American people, among other things, the strongest and most advanced Military anywhere in the World. Incredible Flyovers & biggest ever Fireworks!” the president tweeted Tuesday morning.

Mr. Trump confirmed to reporters Monday there will be tanks “stationed outside,” too.

“You’ve got to be pretty careful with the tanks because the roads have a tendency not to like to carry heavy tanks,” he told reporters Monday.

TANKS ON THE MOVE —

The event will also feature marching bands, fife and drum corps, floats, military units, giant balloons, and equestrian drill teams. The Blue Angels will be doing the flyover, and the fireworks (donated by Phantom Fireworks” and “Fireworks by Grucci”) will be one of the most spectacular sets the nation’s capital has seen.

This is going to be a fantastic Fourth of July with increased access across the National Mall for the public to enjoy music, flyovers, a spectacular fireworks display, and an address by our Commander-in-Chief,” said Interior Secretary David Bernhardt in a statement.

“We received an extraordinary donation for a phenomenal fireworks display, and our colleagues from the Department of Defense will be providing a one-of-a-kind music and air power experience including a flight demonstration from the Blue Angels.”

Other offerings include musical performances by the Old Guard Fife and Drum Corps, the U.S. Army Band, the Armed Forces Chorus and the United States Marine Corps Silent Drill Team.

The agency announced the extended fireworks display will partially be offset by donations valued at $750,000.

Personally, I am thrilled that Trump has ignored critics and is celebrating both the nation and its military this Independence Day. Legal Insurrection readers may recall my son is in the Navy Junior Reserve Officer Training Corps, and I was impressed by the military review the cadets did at the end of a summer leadership program. It was a very moving event, and seeing so many dedicated and disciplined young people celebrating their country was inspiring.

One of the reasons my son is interested in pursuing military service is the exposure of the US Air Force planes at the local airshows, as well as interacting with the personnel who operate them. Having children see the equipment and meet members of the military can be such a critical influence.

Americans outside of the Swamp are thrilled at the expanded celebration.

Thank you President Trump for celebrating the 4th of July!!

Obama hated the 4th of July and banned fireworks and any patriotism!!!!! Thank God we have a real president who loves America again!!!

President Trump loves our great United States of America, our Military and our Citizens! pic.twitter.com/uzFaXwTXke

Thank you President Trump and Phantom Fireworks” and “Fireworks by Grucci” for making the 4th of July the BEST ever!

However, Trump can do nothing without agitating the anti-Trump, #Resistance members of the political class, the media, and progressive activists.

To start with, Baby Trump will be there.

Democrats in Congress have finally found something too expensive.

“There’s going to be a big price tag for this and the taxpayers will have to pick up the tab,” said Sen. Chris Van Hollen, D-Md., member of the Senate Appropriations Committee, which directs spending for such events.

…Van Hollen and other Democratic appropriators on Capitol Hill have raised questions and concerns for months that spending for the day could go haywire.

Then, of course, there are those who are suffering from extreme cases of Trump Derangement Syndrome and won’t embrace the “Salute to America” and its military that the event is intended to be.

You know this will be a hot mess. 1st it’s not a “Salute to America” but a salute to Trump. 2nd he’s been trippin since he attended Bastille Day in Paris, so buckle up cause we’re about to get the Putinization of America’s Birthday with a little Un on top! https://t.co/AbQIXVuyK5

For those of you, like me, who won’t be in Washington, DC, for the Fourth, you can still enjoy the festivities. Fox News is planning to cover “Salute to America” during a two-hour edition of “Special Report,” which airs from 6 to 8 p.m. And C-SPAN is planning to carry the event live, beginning at 6:15 p.m.

How many millions did those two obama dirtbags spend on THEMSELVES? Between barry’s parties and moooochelle’s vacations….

It is estimated the two dirtbags spent 1.3 BILLION on their lifestyle while infesting the white house..

Van Hollen and other Democratic appropriators on Capitol Hill have raised questions and concerns for months that spending for the day could go haywire.

Is DJT actually getting some D’rats to acknowledge the virtues of a budget?

Damn, there’s nothing that guy can’t do.