Joe Biden Wants to Bring Back the Individual Mandate in Obamacare

Joe Biden Wants to Bring Back the Individual Mandate in Obamacare

“I have a plan how to do that that’s rational, that’ll cost a hell of a lot less and will work” 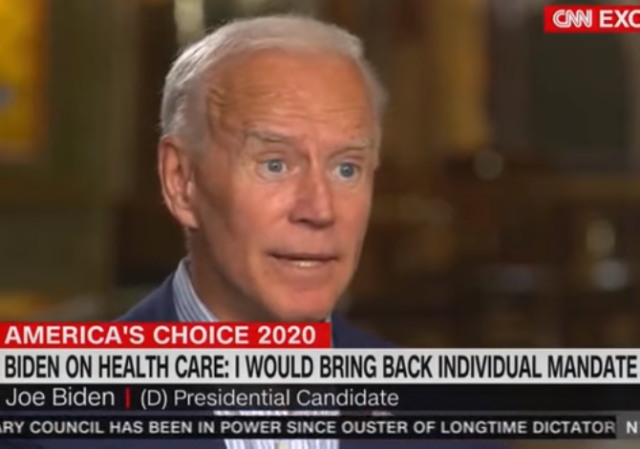 During a recent interview on CNN, Joe Biden revealed that he wants to reinstate the individual mandate in Obamacare, the least popular aspect of the law that eviscerated the Democratic party during Obama’s presidency.

Biden’s entire candidacy, so far, seems to be an effort to save what’s left of Obama’s legacy.

Democratic presidential front-runner Joe Biden revealed Friday he would reinstate the individual mandate and penalize Americans who do not obtain health care coverage if he were to win the presidency.

“I think there should be health care for everyone. I have a plan how to do that that’s rational, that’ll cost a hell of a lot less and will work,” Biden told CNN’s Chris Cuomo during an interview.

Biden put forth that as a way to guarantee that all Americans receive health care coverage, the federal government would fine any individual who did not obtain sufficient health insurance…

“We’re in a situation where if you provide an option for anybody who in fact wants to buy into Medicare for All, they can buy in,” Biden said. “But if they like their employer-based insurance … they shouldn’t have to give it up.”

#NEW: 2020 hopeful Joe Biden says he would bring back the unpopular individual mandate under Obamacare, and insists it’s still more popular than the healthcare proposals being promoted by his Democratic challengers. #OANN

I’ve got news for you bub. We’re not supporting this dead horse anymore. https://t.co/hfPUVtdvbG

Here we go again if you like your insurance you should be able to keep it a senerio https://t.co/74H7L9IK3K

THAT WILL SURELY WIN VOTES!! https://t.co/KZoCPmNrbV

This supercut from the interview is a riot. Watch to the end to hear Biden claim the Russian meddling of 2016 would never have happened on his and Obama’s watch, which it, you know, did.

1. Claim the free market has failed at something.
2. Legislate government intervention.
3. Have the government make things worse.
4. Blame capitalism.
5. More government intervention.
6. Utterly destroy things.
7. Tell the world this is proof we need to have a centrally planned economy run by the same “experts” which destroyed the old economy which was working pretty well until they got involved.
8. Create Alexandria Occasional Cortex.
9. Retire with your millions in bribe money.

Apparently we’re stooopid because we as a nation keep falling for it.

Didn’t he raise his hand with all the other candidates to say he’s for scrapping the whole thing and making a single-payer Medicare-for-All?

Excellent point! Perhaps the single-payer will be the individual being mandated.

I hope he’s the dem nominee. It’ll be a laugh a minute with gaffer Joe.

The individual mandate was as popular as the Black Death.

This schmuck stood by a traitor for eight years of financial and due process tyranny.

The middle class needs this a-hole like a country club needs michelle obama.