My presentation at the Department of Justice Summit on Combatting Anti-Semitism. 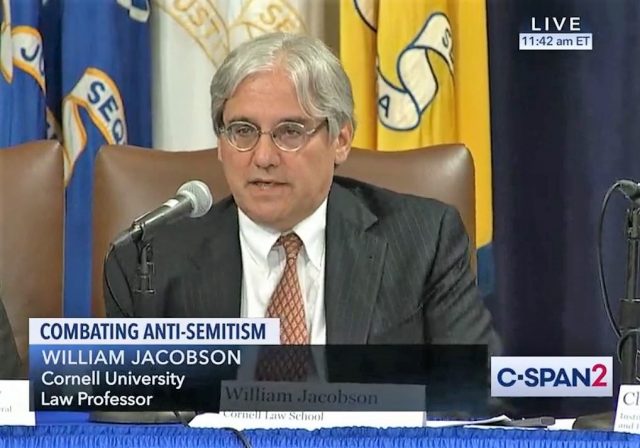 On July 15, 2019, I spoke at the Department of Justice Summit on Combatting Anti-Semitism, on a panel regarding Anti-Semitism on Campus. My presentation was on “Intersectionality.”

Attorney General William Barr, in his opening statement to the Summit, specifically noted the importance of intersectional anti-Semitism:

Another panel will focus on the problem of anti-Semitism on campus. On college campuses today, Jewish students who support Israel are frequently targeted for harassment, Jewish student organizations are marginalized, and progressive Jewish students are told they must denounce their beliefs and their heritage in order be part of “intersectional” causes. We must ensure – for the future of our country and our society – that college campuses remain open to ideological diversity and respectful of people of all faiths.” (Transcription via RCP). 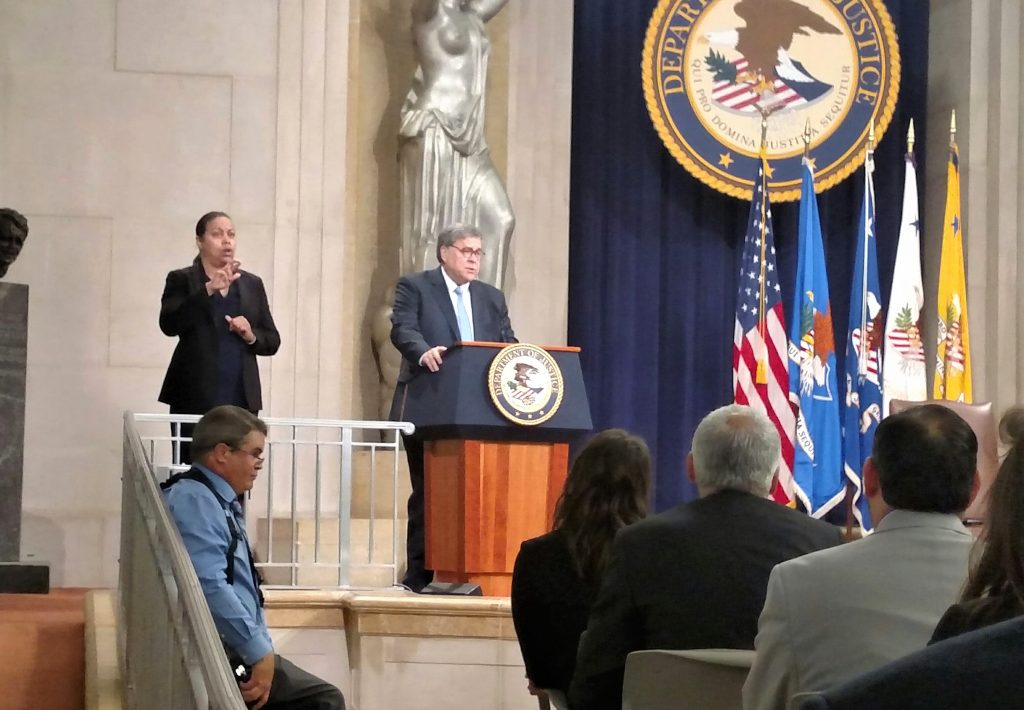 Here is the video of my presentation:

If video does not play, you can listen to the audio here. The full panel presentation, including Question and Answer, is here.

Here is a full transcription of my presentation:

Thank you. My name is William Jacobson.

I’m a professor at Cornell Law School. I’m also the founder and chief author at Legal Insurrection website, which has covered campus issues specifically with regard to antisemitism and the BDS movement almost daily since 2008

I’m going to discuss today intersectionality. It’s a word that Attorney General Barr mentioned in his introduction this morning and it is a very hot topic on campuses.

I’m going to discuss how it was originally formulated, how it has developed into the intellectual justification for the isolation of Jewish students on campus and Zionist Jews in the progressive movement.

I only have a short time today, so there’s a limited amount of detail that I can go into, but I’ll also hope to bring to this presentation my experiences interacting with students both on my campus and many other campuses.

You’ve heard two very excellent speeches so far, presentations so far. And the big takeaway that you need from this presentation and the other presentations is the isolation of Jewish students on campus. Because that is the goal, that is the methodology and that is the single biggest problem that we face.

The statements that have been made so far comport with my experiences interacting with students.

I started my website in 2008 and began covering the BDS movement almost immediately, but it really wasn’t until the 2010-2013 time frame that BDS took off in a serious way on campuses. And at that time there weren’t many major Jewish or pro-Israel organizations on the ground on campuses.

So I often served and my website served as a first responder to students who were seeking help. And we did that. And again, it was that sense of isolation. The sense that they were being ganged up on was my big takeaway from those interactions.

The term intersectionality is a very loosely used term nowadays. It’s kind of like ‘social justice’. It’s a buzzword. It has become something of the Swiss Army knife of progressive campus politics. And it’s far removed from its origins.

It’s often described in conservative media as the Victim Olympics, the ordering of victim status based on various identity-politics classifications. But that’s only a part of it and that’s perhaps more the popular press part of it.

Intersectionality provides the intellectual framework and justification for people who would not consider themselves antisemitic or even necessarily seek the destruction of Israel, nonetheless, to isolate Jewish students. The term, it’s become a toxic mixture of racial and identity politics where anti-Zionism is the unifying feature among many groups who otherwise have very little in common. It didn’t start this way.

The term ‘intersectionality’ is widely credited to a 1989 article by my law school classmate, Kimberly Crenshaw, who at the time was a law professor at UCLA and recently also was at Columbia.

Whether you accept this framework or not, there’s nothing about intersectionality as originally framed that involves politics or involves Israel. It was a way of looking at how the courts deal with discrimination against people who are in multiple classifications of protected groups.

Yet along the way, intersectionality became a buzzword, divorced from this original meaning. A 2017 critique in the Chronicle of Higher Education, noted that the word has “migrated from women’s studies, journals and conference keynotes into everyday conversation. Turning, what was once highbrow discourse into Hashtag chatter.”

Anti-Israel academics and activists have seized on intersectionality as a means of building coalitions of “people of color” against Israel, which is portrayed as a white colonialist enterprise, with the goal of isolating Jews who support Israel’s right to exist, which of course is the overwhelming majority of Jews.

It’s hard to pinpoint precisely when this happened. But certainly, the Durban conference and the goal of bringing race into the attack on Israel, terming Israel an apartheid state, comparing it to South Africa, has turned intersectionality into not just a judicial philosophy or judicial approach, but an approach to demonizing Israel and launching the Boycott, Divestment and Sanctions movement against Israel.
And you see that terminology used repeatedly by the Anti-Israel left, anti-Israel Progressive Movement, particularly anti-Israel Progressive Jews on campuses.

In January, 2016, the Jewish Voice for Peace student network issued a Statement on Intersectionality which read in part: “we are committed to support the Palestinian struggle against Israeli occupation, apartheid and racism, which is bound up with our analysis of its intersection with the struggle of students of color… Anti-Jewish bigotry is not equivalent to the structural oppression experienced by students of color….”

And this is what you hear every day on campuses. Where they put together coalitions of students of color, non-white student groups and they try to use that to isolate pro-Israel students and Zionist students.

We’ve seen it multiple times at Cornell. In 2014, there was a BDS resolution introduced to the student government which didn’t get very far, it was tabled before open discussion. But in 2019 that was renewed and the organizers spent, by their own estimation, two years building a coalition of students. So when they introduced the resolution, there were 20 or 25 students [groups] representing virtually every non-white identity group on campus who were endorsing the resolution, the boycott resolution against Israel. And it was presented that if you want to be supportive of students of color, you must endorse this. And if you object to the BDS movement, you are hostile to racial minorities.

And that’s just one example that we’re seeing on campuses. There are many others. Perhaps we can get into some of those during the discussion, and I’m certainly happy to speak with people afterwards. Thank you.

I wanted to add a comment, I think generally you made a presentation that was very good, but I don’t think the targeting of Jewish people came from nowhere.

Each group in the intersectionality group, potentially has enemies with everyone outside that group, you can be a ally, so it’s all inclusive in that sense, but generally there is one main antagonist.

For blacks and minorities it’s whites, for Muslims it’s Jewish people, for feminists it’s men and the patriarchy, if you embrace socialism it’s rich people.

Sitting right in an inverse intersectionality crossroads is the stereotypical rich white male who is Jewish. All the groups join together as allies and condemn such a person. A teaming up, yes, you are right about that, but I don’t think it comes from nowhere.

Intersectionality, which has its roots in the Judeo-Continental Critical Theory, is harming Jews, at least those Jews that value Israel. Talk about an unforeseen boomerang effect. Critical Theory was designed to bring down European Civilization, not Israel.

OTOH, this is why I don’t take you or accusations of anti-Semitism seriously, which has to do with intersctionality

So a very orthodox Jew whose values coincide with mine gets attacked and a judge shuts him down.

Go ahead and go ballistic over some trivial BDS nonsense at a college in the middle of nowhere. But that won’t uphold the values that are at the foundation. And do realize that many Jews are intent on destroying them and using the “anti-Semitism” accusaton against those who would slow or stop that destruction.