Former intel chief: Germans “have a right to know whether their leader is still physically in a position to fulfill” her duties. 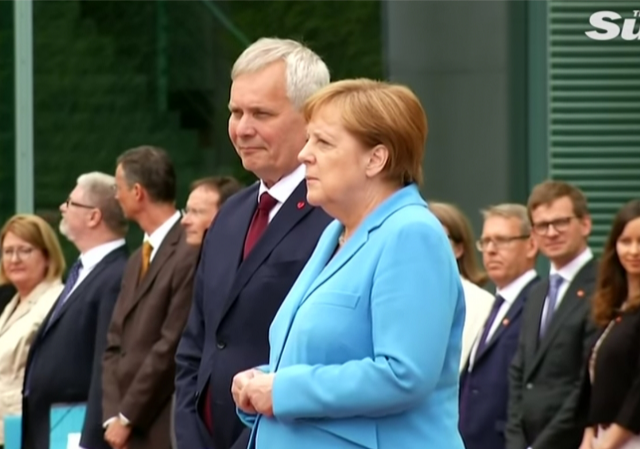 Serious concerns over German Chancellor Angela Merkel’s health have grown after she was seen shaking uncontrollably in public for the third time in the last few weeks. Chancellor Merkel, whose term ends in 2021, downplayed the trembling episodes claiming she was doing “very well” and “no one should be worried.”

The first bout of trembling occurred on June 18 when she stood alongside Ukrainian President Volodymyr Zelensky during the playing of the national anthems. Days later she was seen shaking during a public appearance with German President Frank-Walter Steinmeier.

The state of Chancellor Merkel’s health is a matter for national concern, former German domestic intelligence chief Hans-Georg Maassen said. “The state of a political leader’s health is not a private matter,” the former spy chief tweeted on Wednesday. “The people in Germany have a right to know whether their leader is still physically in a position to fulfill her office with all her strength.”

Considering her health, Chancellor Merkel broke protocol on Thursday when she opted to remain seated during the national anthem ceremony as she welcomed Denmark’s Prime Minister Mette Frederiksen in Berlin.

While most of the German news outlets reassured the public and did not challenge the official version, Germany’s Bild newspaper ran the headline: “It just doesn’t stop: Merkel and her shaking fits.” In another headline, the tabloid dared to speculate: “What will happen if Merkel really gets incapacitated?”

On Wednesday, Merkel, 64, suffered a third bout of shaking within the space of a few weeks while standing in the courtyard at the Chancellery. But before long, she seemed her usual self again — the chancellor that many have long come to know: calm, matter-of-fact, emotionally restrained but with a slight smile.

“I am doing well. As I have recently said, since the military honors with [Ukrainian President] Volodymyr Zelenskiy, I have been in a processing phase. That is apparently not yet completely finished, but progress has been made. And I have to live with it for a while now. I am fine,” Merkel said just an hour after she was seen shaking uncontrollably again. (…)

Merkel’s health began making headlines after she was seen shaking during a reception for Zelenskiy in mid-June in the courtyard of the Chancellery. But, nine days later during a farewell ceremony for the departing justice minister, Merkel was seen shaking again — this time holding her hands in front of her body. But, once moving, she was back to normal.

Chancellor Merkel, who first took office in 2005, secured her fourth term in the 2017 election. Last December, she announced the decision not to seek another term after a series of setbacks at the hands of the right-wing newcomer Alternative for Germany (AfD) party in the regional elections.

She began her political career in the early 1970s with the youth wing of the East German Communist Party, where she served as secretary for ‘Agitation and Propaganda,’ or agitprop at the local level. She has never issued an apology or expressed regret for the role she played in the oppressive Communist system. After the fall of the Berlin Wall, she switched sides and joined the ruling West German Christian Democratic Union (CDU). She rapidly rose through the party ranks as the protegee of the then-Chancellor Helmut Kohl, becoming the leader of the conservative party’s parliamentary group in 2002.

Widely regarded as the ‘Iron Chancellor’ for her stringent fiscal policies, Merkel faced stiff opposition at home and within the EU for opening Europe to millions of immigrants in the autumn of 2015 in the wake of the European migrant crisis. The decision by Germany to open its borders, despite opposition from Austria and other neighboring East European countries, was seen as an invitation by hundreds of thousands of young men from Arab North Africa and the Middle East. Germany has suffered a series of Islamic terrorist attack perpetrated by asylum seekers and seen a drastic rise in the migrant crime rates since the opening of the border three years ago.

If Chancellor Merkel were to leave the political stage in the near future, she will leave behind a bitterly divided country facing serious social and security challenges.

Shakin’ In The Sixties

Any docs out there want to weigh in?

Merkel has I-destroyed-my-nation-by-immigrationitis. The old doc says Merkel might survive it, but certainly not Germany.