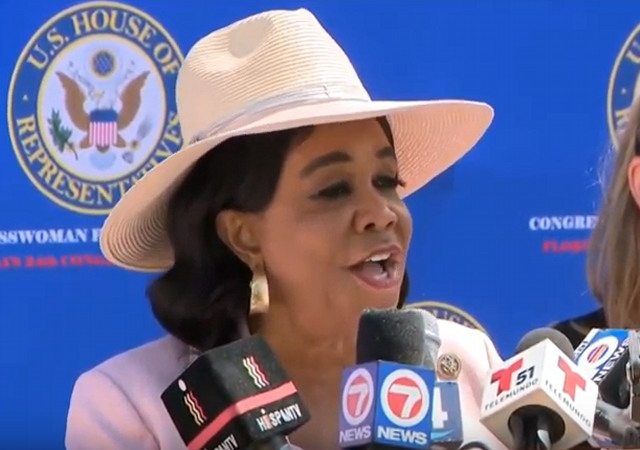 Rep. Frederica Wilson (D-FL), is a perfect example of how out of touch our political class has become. Despite taking an oath to defend the Constitution, Wilson would like to override the First Amendment to protect members of Congress from mockery.

Democrat Rep. Frederica Wilson said people who are “making fun” of members of Congress online should be “prosecuted.”

The Florida congresswoman made the comments on Tuesday outside of the Homestead Temporary Shelter for Unaccompanied Children in her home state.

“Those people who are online making fun of members of Congress are a disgrace, and there is no need for anyone to think that is unacceptable [sic],” Wilson said.

Wilson’s comments came amid a controversy over a Facebook group that includes Border Patrol agents and where they allegedly mocked and posted graphic content about members of Congress, including New York Rep. Alexandria Ocasio-Cortez.

Democrats and their supporters merciless mock President Trump online, accuse him of being a dictator and worse, but apparently, anything involving the precious AOC crosses a line.

Wilson is the same woman who said on national television that she doesn’t trust our Border Patrol agents being around migrant girls who are going through puberty. What exactly is she implying?

Finally, in terms of shutting down people who mock members of Congress, Wilson should not worry. The base of her party is taking care of that.

Mini AOC is reportedly stopping her comedic videos due to death threats she and her family have received. https://t.co/XIavkqG3nf

At what point does the “private business” label stop covering “carrying out the policies of the government in return for favorable treatment”?

I would love to see her pursued down the sidewalk by a crowd of people laughing, pointing, making comments about her clownish dress, her hats, and her in general. Then, record her reaction, and hang the videos up on the net.

“People have lost respect for congress”. No kidding.